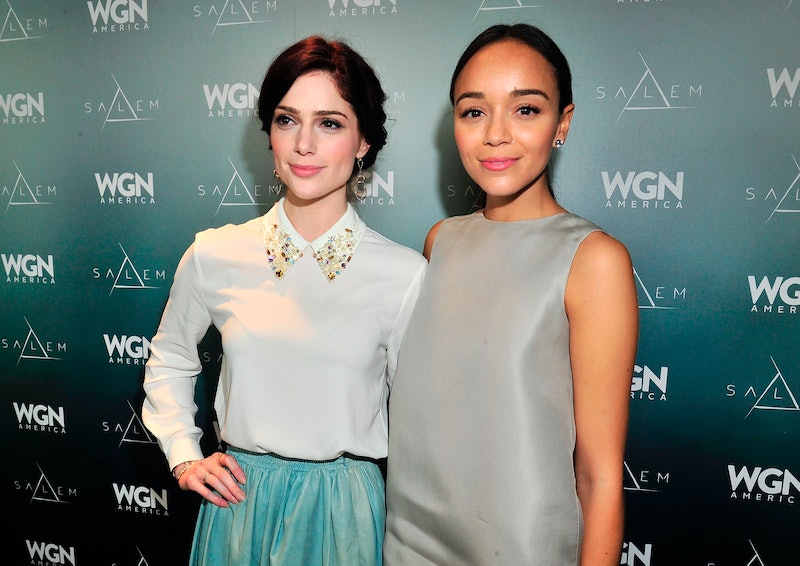 Antiheroes have become so commonplace in prestige drama that they've nearly reached their saturation point. Bad dudes doing bad things is TV dramas' bread and butter, but there's really only been one woman we'd categorize as such — Glenn Close's Patty Hewes on Damages. But now, thanks to WGN America's original series, Salem (which hits the small screen this Sunday, April 20th at 10PM) we now have not one but two female antiheroes in the same show — one even being a woman of color! Three cheers for diversity! — in Janet Montgomery's Mary Silbey and Ashley Madekwe's Tituba. And that's an accomplishment worth crowing about, because we need more of these complex portrayals of women on screen.

Typically, the hallmark of an antihero character is someone who carries a lot of imperfect traits — be it ignorance, selfishness, or the like. In conjunction with that, there's almost a feeling of victimhood, where they feel helpless in regards to controlling the world in which they live. Ultimately those more human qualities temper the more villainous ones in such a way that you can see how and why the protagonist might believe that the ends justify their means. Which is exactly why Mary Sibley is the Witchy Heisenberg of Salem: in order to save herself and the other witches of Salem, she must send the village into a frenzy of in-fighting, destroying all the regular humans in order to allow the witches to thrive.

The problem that has long been at the helm of putting female characters into this position is an antiquated and sexist one. Often, people don't like to see women in this capacity! Normally, female roles are meant to exist in service of a male character (The Bechdel Test has proven this), with an equal rareness on the villain front. But as writers, producers, directors, and the rest of Hollywood slowly relent to the idea that the male point of view doesn't have the be the only in-road into a show, story, character, or idea, the need for a female antihero has arisen. (Besides, someone finally figured out that female-fronted stuff makes money, so huzzah for that!)

But Tituba and Mary are different. Whereas several critics lobbed complaint against Damages' Hewes' in her early days because her histrionics seemed unfounded, Salem succeeds because it is grounded in a very real fear that captured the hearts and minds of early American settlers. Yes, the story is based in history, but when you flip the script, so to speak, adding a the supernatural element that make the witches the real controllers of the trials, well, that gives the darkness an entirely different bent.

It becomes a story about survival and protection — especially considering the fact that Mary didn't go all that enthusiastically or willingly into witchdom — not making the world a terrible place for those uptight Puritans (though that is certainly a happy extra because ugh, puritanical rule sounds like it was the worst!). And that makes Tituba, in this instance, both a hero and a villain — and oh my, look at that, I do believe that makes her an antihero! — too, as she was the one who brought Mary down this rabbit hole. Who controls whom? Are they friends unified or reluctant bedfellows? Does Mary revere or regret giving Tituba all this power over her? Will either come to regret their decisions? It's juicy, compelling questions like these that make the dynamic between these two dark and devious women so engaging on a storytelling level.

There's a rich tapestry to be discussed in utilizing two characters such as this. By creating a world where we're buoyed back and forth between Mary's human existence versus her witchy one, it creates sympathy and ire for both sets of circumstances, making each choice Mary and Tituba make all the more thrilling. At any given moment a decision, thought, or action, could place you on the opposite side of what you believed just moments before.

And that's not even considering the fact that — let's be real with ourselves here, ladies — there is no shortage of woman-on-woman hate in this world. And that goes double for Salem. I mean when you consider the fact that the time period required women to be nothing more than husband adornments — turning love, romance, and friendships into a glaring competition — it shows how often women forget who the real enemy is (answer: the patriarchy!). By using Mary and Tituba as our main forces — yeah, yeah, yeah, we know you guys are in there, too, John Aldean (Shane West), Cotton Mather (Seth Gabel), and Isaac the Fornicator (Iddo Goldberg) — the women of Salem can really make opportunities for themselves, based wholly and completely on their own will, morals, and senses of self. And through their own actions can become heroes, antiheroes, and villains NOT just damsels in distress. We see that already in the pilot with Elise Eberle's possessed Mercy Lewis and Tamzin Merchant's Anne Hale, whom Mary has seemed to take a frenemies-bent interest in.

Regardless of whether or not you want to watch yet another show about witches (but we suggest you at least give it a chance — particularly if you're into more horror-based fare), no one can deny it is necessary for shows like Salem to exist. Shows that push us forward in our acceptance of female roles outside of the norm. Ones that make you question who's in the right and who's in the wrong. Shows that make you question not only the moral turpitude of the characters and the world they live in, but also your own. Besides, it's totally fucking badass to see a woman in this role, so why wouldn't you want to give it a go, eh?