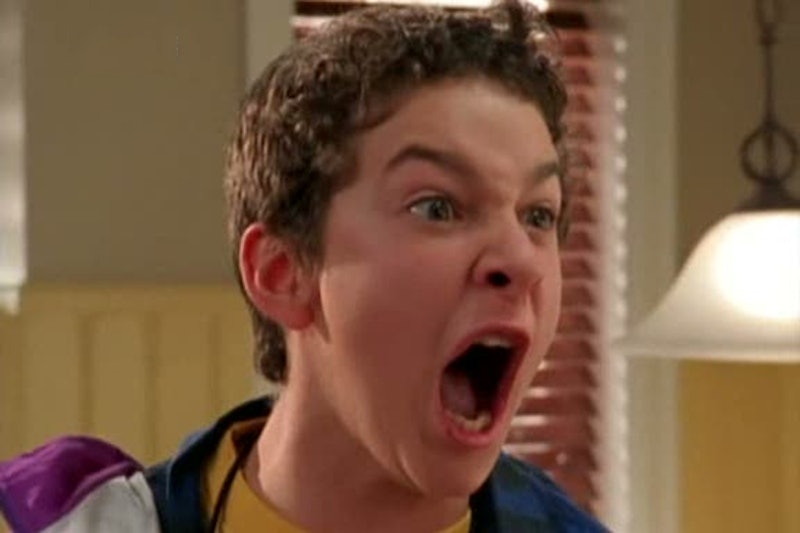 If you're a regular Twitter user, you probably noticed that Even Stevens was trending on the site this morning. And you subsequently wondered if it was because Twitty aka A.J. Trauth is hot now and engaged to Leah Pipes of The Originals or because Shia LaBeouf was acting out again. On any other day, you'd be right — but on Thursday morning is was because two episodes of the beloved early '00s show aired Wednesday night on the Disney Channel during "Disney Replay." And we're feeling all kinds of #throwbackthursday about it.

You might not have known about "Disney Replay" — because if you were a fan of Lizzie McGuire, Even Stevens, and other shows from network's early '00s lineup, you're probably not watching the channel. You're also probably sound asleep between the hours of 12 and 1 a.m., which is the program's designated block. Disney Channel launched "Disney Replay" exactly a year ago today — and explained that it'd be a one-hour block every Wednesday where they'd air episodes of original series from the past decade. And lucky for all of us, Even Stevens happens to be one of those series.

So in the spirit of #TBT — here's the 7 best Even Stevens episodes we need to see again ASAP:

In this episode, Louis gets jealous when Twitty finds himself a new girlfriend and would rather hang out with her than Louis. As a result, we end up getting introduced to one of the greatest pastimes we've ever seen in the history of, well, ever — Foam-Hunk Dumpster Diving. Twitty's girlfriend calls jumping into the foam dumpster stupid and then calls Twitty stupid and they end up breaking up — much to Louis' happiness. But mostly, foam-hunk dumpster diving just rules.

The pilot episode of the series — because everyone loves a classic. In the first Even Stevens episode, Louis trades a date with Ren to Ernie Morton for a baseball card — one of the many times he'll include Ren in his schemes against her will. Louis tells Ren that Ernie's a part of the Adopt-A-Friend club at school to get her to spend time with him while disguising it as community service she needs to complete to be the #1 student. In a great Louis moment — he ultimately feels guilty after getting the card from Ernie and trades it in for a necklace for Ren.

"The Secret Life of Girls"

Ren hosts a slumber party and Louis decides to rig up a camera in Ren's room and sell tickets to his friends to watch the party because he needs to raise money to buy a suit of armor. He ends up getting caught and given a make-over by Ren and her friends. But even more important in this episode — the introduction to Beans, the Stevens' bacon-loving neighbor. After Louis and Twitty catch him and ask why he's spying on them, they decide to adopt him into their group and dub him Beans.

"Raiders of the Lost Sausage"

Louis accidentally smashes a hole in his basement wall, while bowling with a frozen turkey, that reveals a tunnel under the house. After researching the history of the Stevens' family home, he learns that a famous sausage maker once lived in their house. His father, Steve, worried about another one of Louis' get-rich-quick schemes decides to help him search for the mysterious golden sausage he believes is buried under the house. In a riff on Indiana Jones — a franchise, coincidentally, Shia LaBeouf would one day join — the episode ends the same at the third film when Louis drops the golden sausage.

"Heck of a Hannukah"

Louis, like most of us, can't wait to find out what he got for the Stevens' family's Christmas and Hannukah celebrations. He manages to get ahold of his presents, even though he trashes Ren and his brother Donnie's rooms in the process, and opens them. When his parents yell up to him that they're coming upstairs, he has nowhere to hide the gifts (because his room is a comically huge disaster area) so he wraps them in a bed sheet and hangs them out the window. They end up falling and he gets blamed for ruining the holidays and gets grounded for Hannukah. Louis ends up wondering whether or not his family would be better off if he'd never been born and instead they had another perfect child. In a riff on A Christmas Carol, Louis' great-great-great-great-grandmother Bubbie Rose comes to show him what life would be like for the Stevens family if Louis had never been born.

This episode marked the first time Ren failed to perform to her Top-Student criteria when she got a C in wood shop. She spent the remainder of the episode trying to get the teacher to give her a make-up exam but the shining star of this episode was Louis' replacement locker. After his original locker grew some type of hostile organism, Louis got moved into the janitor's closet as his "temporary locker". He ended up tricking out the place like only Louis Stevens could with neon lights and palm trees and it became the school's party central.

We hate it but we love it. There isn't a single person that doesn't catch themselves singing "We went to the moon in 1969, that's when we made a landing that was lun-errr." Ren gets the flu and falls asleep while watching a video of a singing cowboy — she ends up having a crazy dream as a result of her extreme paranoia of missing a day of school and trashing her perfect attendance record. When she shows up to school in the dream, she immediately realizes how unprepared she is and Principal Wexler kicks off the musical episode by singing the morning announcements. Watch Ren get an F on her science presentation after singing the entire thing below.