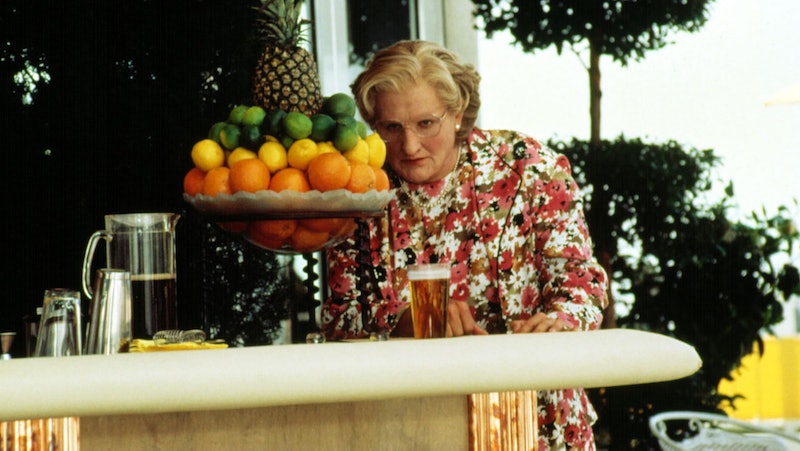 Here's something that will make you feel old: Mrs. Doubtfire was released in 1993. Now that the movie is set to get a sequel, it'll certainly need some updating. You may have fond childhood memories of the film consisting of Robin Williams' crazy voice and that funny montage to "Dude Looks Like a Lady," but like a lot of movies and television that have men in drag, it's pretty problematic when it comes to its treatment of trans and queer issues and gender. For example:

This isn't a problem specific to Mrs. Doubtfire, but it's certainly a problem the movie has. About 90 percent of the film's humor is based on the concept of "it's funny watching men dressed up as women!" This is a concept that permeates our culture, and it's offensive on a few different levels: offensive because its humor is derived from the fact that a man is demeaning himself by dressing up as a women, offensive to biological men who identify as women, and even offensive to drag performers. Not to mention that it's a pretty tired concept for a joke — it wasn't new in the '90s, and it's certainly not new now.

There's a specific scene is Mrs. Doubtfire that's supposed to be funny, but it wouldn't make much sense today. It's when Daniel is in drag as Mrs. Doubtfire on the bus, but his pantyhose start slipping. The bus driver, who's making flirty conversation with Mrs. Doubtfire, catches a glimpse of her copious leg hair and basically says "That's okay, I like that it's natural." It's obvious that you're supposed to laugh: Leg hair on a woman? Gross! Who would ever like that? But in this day and age, who cares?

Straight Dudes Are Freaking Out

The movie seems to want to make it very clear that Daniel is straight. No way no how does he enjoy this! He's just doing it to get close to his family! He freaks out when he gets hit on by men, he hits on women, he makes it clear to his son that there is no way he is into dressing in drag, no siree. His son won't even hug him while he's in drag, because as he explains, it's "a guy thing." Now that we're well into the 21st century, homophobia is no longer "a guy thing"... it's a "close-minded person thing."

The scene where Daniel's kids finally catch him out of drag is the biggest example of the huge leaps we've taken since 1993. When they find out that Mrs. Doubtfire is actually a man, the kids proceed to completely freak the hell out. They grab tennis racquets, the son starts pacing around going "He’s a she, she’s a he, he’s a she she!", they almost even call the cops. This fuels the offensive stereotype that trans people are dangerous perverts. The movie underscores this fact when Daniel finally talks to his kids about it, saying "This is not a way of life. It’s just a job. I don’t go to old lady bars or anything like that after work, you know? It’s the only way I could see you every day."

Now, most people realize that yes, this is a way of life, for many people who are simply normal human beings like everyone else. Not demeaning the experiences of trans people will be one of the most important things to include in the sequel.