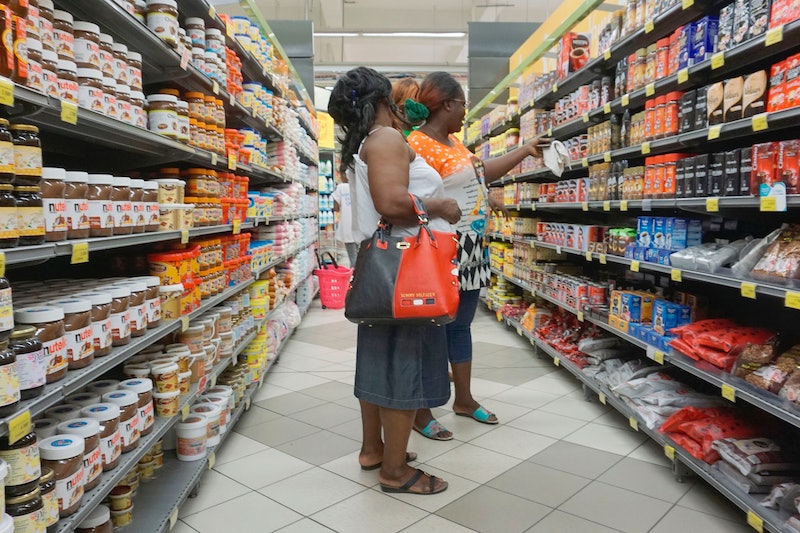 We're all well aware that processed foods are full of chemicals — but since life is short and bread tastes amazing, we've chosen to ignore that fact. Well...maybe denial isn't the best idea in this case. AlterNet recently posted a list of five ingredients in foods we eat every day that are, to say the least, not exactly what you'd want swirling around your digestive system (spoiler alert: something called "meat glue" is one of them). Just to be on the safe side, here are a few notable and difficult-to-pronounce ingredients you should avoid during your next trip to the grocery store.

What it’s in: Bread

Why you should avoid it: If you haven’t heard of this one yet, you may want to sit down for what I’m about to tell you. Azodicarbonamide, also known as “dough conditioner,” is a chemical used to “improve elasticity” — and it’s also used in yoga mats and rubber soled shoes. As in, the same chemical your sneakers are made of could be passing through your GI track right this second. Scary, huh? Food blogger Vani Hari campaigned to have Subway remove the chemical from their bread. Oh, and one more thing: despite the fact that it’s banned in the UK, Europe, and Australia, the USDA and the FDA have approved the use of azodiacarbonamide in food. Yikes.

What it’s in: Sodas and beverages

Why you should avoid it: This one is perhaps the scariest of them all: brominated vegetable oil (BVO) is derived from the same element used as a flame retardent in couches and carpets. Yep, to create BVO you must bond corn or soy oil with bromine, the element in question. So, what happens when something like that gets inside of your body? According to AlterNet, it builds up in your body and has been linked to early puberty as well as hormone and neurological issues. Yikes. According to MayoClinic, research suggests that those who consume large quantities of BVO may experience memory loss and skin and nerve problems. New life rule: don’t drink large quantities of Fanta, Mountain Dew and Gatorade. Or any at all. Just don't.

What it's in: Meat, tofu, milk, yogurt and even cereal

Why you should avoid it: Transglutaminase, or “meat glue,” is basically an “adhesive powder” used to literally glue cheap pieces of meat together in order to make what would appear to be a filet mignon. In most cases it’s either derived from animal blood or fermented bacteria (I’m not sure which sounds worse). In a piece for the Huffington Post, Chef Staffan Terje of Perbacco restaurant in San Francisco, went so far as to describe these hodgepodge meat creations as “Franken-steaks.” The Huffington Post also notes that despite the USDA’s requirement that transglutaminase be listed on labels, they don’t require restaurants to indicate it on menus — just something to keep in mind. Avoiding (Franken) steak for a while might be a wise idea. Ugh, and maybe hot dogs too:

To view the complete list of foods to avoid, visit AlterNet!