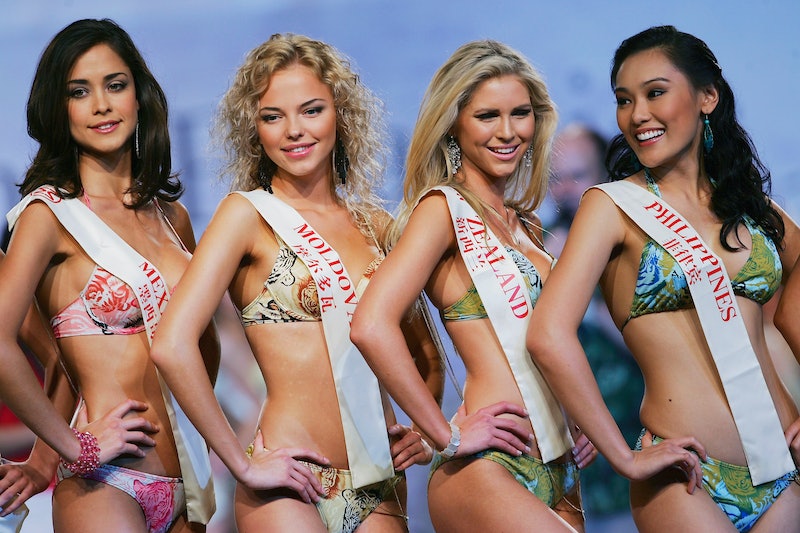 Ever heard of the Miss World sarong contest? No? That’s because it didn’t exist, at least until this week. For the first time since Miss World started in 1951, bikinis will be banned in this September's pageant. Instead, contestants will parade in “beach fashion,” including one-piece swimsuits and sarongs. According to Julia Morley, chairwoman of the Miss World Organization, the decision stemmed from a desire to avoid being “disrespectful” to largely-Muslim Indonesia, host to this year’s competition.

The decision resulted from the vocal protests of a small group of conservative Muslims–the same group who protested the visit of Lady Gaga, alleged devil-worshiper. Catering to conservative minorities’ demands is no news for Westerners in Indonesia: both The Pussycat Dolls and Beyoncé were asked to cover up when performing there.

With 90 percent of its 240 million population identifying as Muslims, Indonesia is the largest Muslim-majority country in the world. Yet Indonesia’s government and constitution is secular, and there are notable Christian, Buddhists, and Balinese Hindus minorities. Another surprising tidbit in this story is the location of the pageant itself: bikini-clad-tourists' heaven, Bali.

According to pageant organizer Harry Tanoesoedibjo, sarongs will also help viewers connect with contestants’ inner beauty. “It has been misunderstood by some people that Miss World is a beauty competition focusing on the physical attractiveness of a woman’s body,” Tanoesoedibjo explained.

This isn’t the first time the racy swimwear caused a splash. In the first-ever Miss World pageant, staged as a bikini show for the 1951 Festival of Britain, the crown went to Kiki Hakansson from Sweden. Hakansson was the first and only to be crowned in her bikini, leading to a condemnation by Pope Pius XII.

Feminists have also been vocal about the offensiveness of the bikini contest in the past. In the 1970s and 1980s, protests were organized against the two-piece swimwear. But feminists should take pause before rejoicing over this ban–it’s all part of the all-too-familiar refrain of men trying to control the display of women’s bodies. The Indonesian Ulema Council, the country’s top Muslim clerical body, denounced the pageant as “an excuse to show women’s body parts that should remain covered.” It seems silly, whipping up such a storm over appropriate beach fashion when the whole pageant is designed to display women’s bodies–a little midriff can’t make that much of a difference.