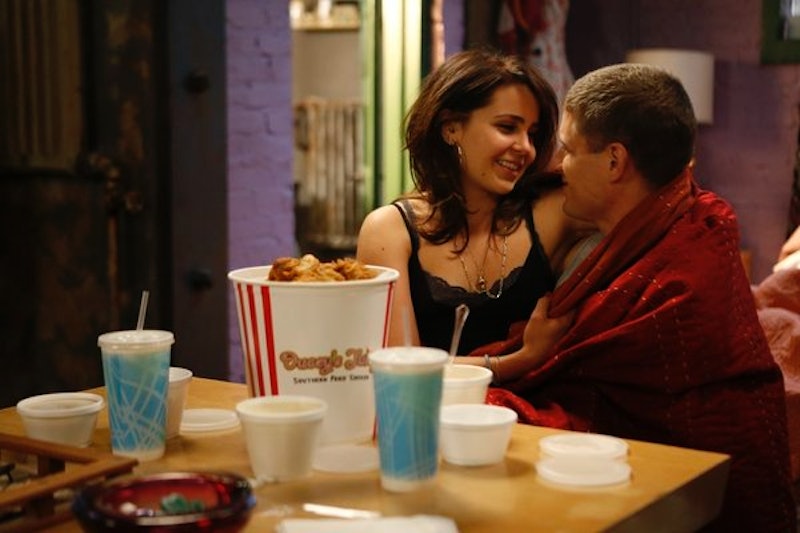 It's been a long road, but it took a hospitalization and a power-tripping mom to finally bring Parenthood 's Ryan and Amber back together — unfortunately, however, the reunion was short-lived. Thursday night's season finale saw the on-again, off-again couple finally confront their relationship issues once and for all, with the final result being a major, emotional decision: despite still having feelings for each other, they're not going to get back together. That is, unless Amber's pregnancy test comes out positive. What?!

Up until the last few minutes of the episode, it seemed that the biggest Ryber-centric moment of the episode was going to be their tear-jerking breakup in the hospital room, where the duo decided that it was best if Ryan returned back home to Wyoming. Yet suddenly, Amber was wandering the aisles of a store, grabbing a pregnancy test off the shelf. For a show that loves wrapping up its seasons with a tidy bow, talk about one hell of a cliffhanger.

We'll have all summer to contemplate what will happen to Ryber if Amber is, indeed, pregnant, so for now, let's focus on what happened leading up to the test-buying. Last week, we saw Amber rush to the hospital after learning that Ryan had been in an accident. Upon seeing him, the exes sobbed in each other's arms, but it wasn't until Thursday that we learned exactly what had led Ryan to return, injured, to California. It turns out that the soldier had driven home drunk one night, running through a red light and flipping his truck. The army gave him a medical discharge, a fact that he admitted to Amber with obvious shame.

Amber, of course, didn't care about the circumstances of her love's return, reminding him that she was there for him regardless and wanted to aide in his recovery. Unfortunately, Ryan's cold, cigarette-smoking-in-indoor-places mom voiced her opinion on the matter, and informed Amber that she was taking Ryan home to Wyoming. Amber, who hadn't even known about Ryan's discharge until her mom brought it up, is upset by the news, but ultimately supports Ryan in the decision. As they say goodbye, Ryan tells Amber that he thinks about her every day, and they proceed to have the most depressing make-out session in TV history.

It's an emotional end for the couple, but a mature one; Ryan and Amber had problems long before he redeployed, and it makes sense that his mother, despite her awfulness (seriously, who says "he doesn't even have a pot to piss in" about their own son?), would want him to recover at home. Amber's come a long way since Ryan left for Afghanistan, and as much as Ryber fans would like to see them back together, maybe it's best if they spend some time apart.

That is, unless Amber's pregnant. While it's hard to imagine the Parenthood writers saddling the 20-something with a kid this suddenly, it's not out of the realm of possibility. What's more surprising is that they'd choose to air such a cliffhanger in a season finale, seeing as the series hasn't even been confirmed for pick-up; is this Parenthood's way of telling us that they will be back for season six, even if NBC won't confirm it? Let's hope so, because the idea of ending the series not knowing if there's a new member of the Braverman clan coming is too awful to even consider.