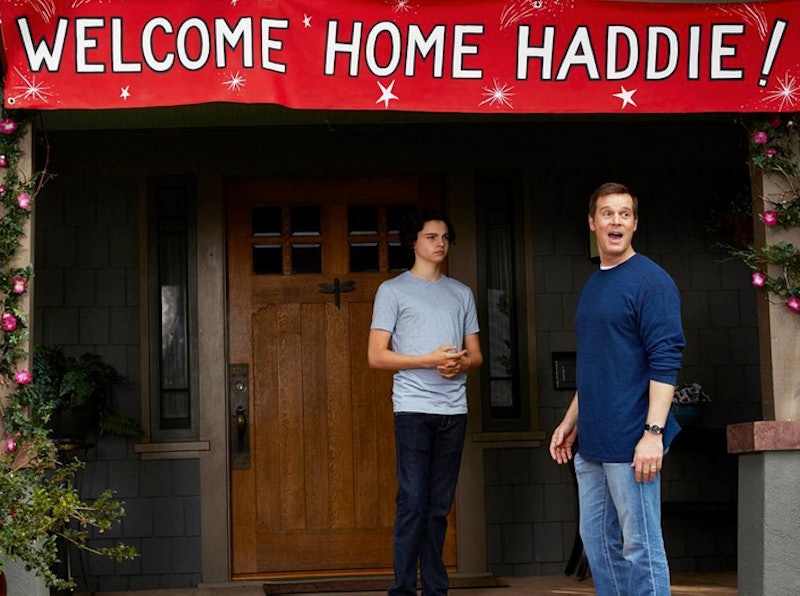 We can officially forgive Parenthood for these past five seasons. Because the NBC series pulled off a beautiful season (possible series?) finale. And, despite the fact that the series left some storylines open-ended, it took a really good, necessary step. And that step was Haddie Braverman falling in love with a woman.

Parenthood has long been one of the most underrated dramas on television, exploring the lives of a sprawling Bay Area family as they survive very realistic human experiences: From Aspergers, to speed bumps in the workplace, to learning how to be a parent, to explaining racism to your kid, to cancer — you name it, the Bravermans have been through it, and they did in as grounded a way as anyone on television ever could.

But there was always something missing. Because for all you could relate to the Bravermans — for all you wanted to be a Braverman and have that giant, loud family rush to your aid whenever the world got you down — absolutely none of the Bravermans were gay. And it was baffling, really, considering the sheer number of them. You'd think out of nine kids and nine adults, someone would maybe not be straight as a nail. And, sure, a few of those kids aren't through puberty yet, and a couple of them are infants, but the dearth still stood, the (to borrow a word from my liberal arts education) heteronormativity most heavily present in scenes like the "sex talk" Adam and Kristina gave Max last season.

But now we have Haddie. And yes, it should be noted that she's not a hail mary of representation: She's a white cis person living comfortably in the middle class, dating a fellow white cis person. The problems of the world (and of the show) are not solved because her return including her macking on a lady.

But it helps. Oh, it helps. And it was beautiful. This is where I thank the Parenthood producers for casting Tavi Gevinson in the part of Haddie's girlfriend, Lauren: Her deep voice, doe eyes, and naturally (magically unintimidating) gravitas made her practically an insta-Braverman: She fit right in. She fit right in so well that Adam practically didn't blink when he came to the realization that his eldest daughter had entered into an adult, healthy, mutually loving relationship with another girl. And she fit in well enough that the long months of Sarah Ramos' absence from the show suddenly felt like less of a void: She'd been at Cornell! Falling in love with Lauren! Who is great!

The fact that Haddie hesitated to come out to her parents despite their status as a relatively liberal Berkeley family tells us pretty much all we need to know: The Bravermans have been remiss on this issue. The fact that her parents react as wonderfully and supportingly as they did when they did find out about the new love in her life is just as telling, though: Parenthood's ready. If not to represent the whole world, then to at least portray a slightly larger piece of the pie. That's a breath of fresh air this show and its viewers very much needed.

And so we should be happy for Parenthood, and happy for Haddie Braverman, that it and she accepted this part of their identity as gracefully as they did. I will be genuinely sad if the show doesn't get renewed and this was the last episode of Parenthood ever: This feels like such a good beginning. But regardless of whether this was a series finale or a season finale? I'm proud they went out this way.