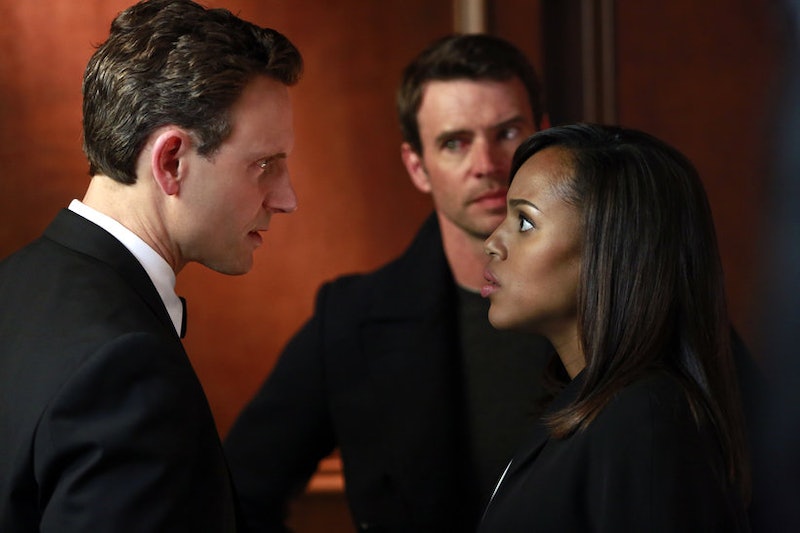 The third season of Scandal has ended, but not without a bang. Which I mean literally, cause, you know, a bomb blew up. And a bunch of other stuff happened, too — so much, in fact, that I'm not sure how they fit it all into one hour. Less than that since there were commercials (including a Neutrogena ad with Kerry Washington that had me very confused as to whether or not the show had come back on).

But then, this show has sort of given up on being as good as it used to be and instead has started trying to be as fast-paced and dramatic as possible in hopes we can't tell the difference. Sigh.

But seriously, guys, the finale was crazy. Just take a look:

It turns out Cyrus did not just run out the clock on the bomb at the senators funeral and let it go off, killing a few dozen elected officials. Instead, Jake tells the president to have the place evacuated, and it is, just in time. In the aftermath of the bombing, Sally Langston, who was in attendance, gets a bomb victim makeover courtesy of Leo smearing ash all over her face and goes to work helping victims. And the news eats it up.

So basically, everyone realizes that she's going to win.

But wait! It's still early in the episode. Olivia comes back to the office to find her mother has stabbed Eli several times, and rushes with him to the hospital where he survives because he's Eli Pope.

Meanwhile, Harrison manages to talk his way out of getting shot by Adnan by promising not to tell anyone about the bank accounts, and returns to Pope and Associates just in time for him and Abby to walk in on Huck and Quinn doing it in the conference room next to a pool of Eli'd blood. Kids these days.

And as Abby is dealing with that, her boyfriend tries to convince Jake to help him take down Cyrus, who he has now taken to calling Voldemort. But Jake tells David he's just a normal guy now and that David will never find a big pile of lovely evidence and that all Jake cares to do right now is watch the Redskins lose to the Cowboys, which is probably meant as some sort of metaphor, but I'm still back on Voldemort.

Given that the election is essentially lost, Fitz and Olivia have an obligatory conversation about Vermont, which ends when she tells him that he needs to stop hating Mellie because she was raped by Fitz's father. Which is a total betrayal of Mellie's trust, but seems to work out well? At the very least Fitz is actually supportive of Mellie for the first time in forever, though it also means he's not going to divorce her yet. So no jam for Liv.

And it seems Huck and Quinn aren't destined for happiness either. A jealous Charlie gives Quinn an envelope he says will ruin their chances for happiness. And of course it contains info about Huck's family, and of course she decides to have him meet her outside their house to break the news and of course he hates her now. Charlie totally called that.

And then the episode takes a turn towards "Oh my God I can't believe they just did that!" territory. At Fitz's last campaign event, his son Jerry collapses from what turns out to be bacterial meningitis and dies. Dies. Their kid dies.

Which of course means Fitz wins the election now because everyone feels sorry for him. (Which is disturbingly plausible. God Americans are dumb about voting, aren't they?) But more importantly he wants to know how it happened. Eli Pope tells him the strain of meningitis was stolen from a lab by Mama Pope and Fitz gives him carte balnche to destroy her. So Eli tracks her down with help from Harrison, who breaks his deal with Adnan upon finding out Adnan is dead.

As Fitz and Mellie grieve – which is legitimately heartbreaking – Olivia decides she needs a new start. She calls her dad and asks if that plane and the new life he offered in the season premiere are still available. When Jake tries to talk her out of it she says it'll be better for everyone if she leaves, telling him, "I'm the scandal!" which is actually awesome in that there are so many things you can make from that, not least being the totally accurate observation that this show would fall apart without her. But since she is determined to leave, Jake asks to go with her, and she agrees. Somewhere, #TeamJake is cheering very loudly.

But this is Scandal and it can't all go down that smoothly. Upon realizing that B6-13 has been revived with Eli in charge, Harrison realizes that Mama Pope didn't have cause to kill Jerry Grant – but Jerry's death did mean Eli got everything he wanted.

And it all, chillingly falls into place. Eli promised Olivia he wouldn't hurt Fitz, which he didn't. He knew she wanted Fitz to be reelected, which he was. He also wanted Olivia to leave town, which she does. Plus, one of Fitz's secret service agents is on B6-13's payroll, and he got the resources to track down Mama Pope, who is not dead like he promised, but in one of those infamous B6-13 holes.

In the final moments of the season, Fitz wins the election, Harrison probably gets shot for knowing too much (which might be a smart move considering the trouble the actor's in lately), Huck knocks on the door of his family's house and comes face-to-face with his wife, Fitz has a minor breakdown in his office, David gets several large boxes full of evidence about B6-13 (one might even call it a pile), and Liv doesn't answer Fitz's desperate call. Instead, the plane takes off carrying her and Jake far, far away.

Yeah, whatever, she'll be back.

And to keep us company until then, let us take comfort in her coats during the long wait for September.