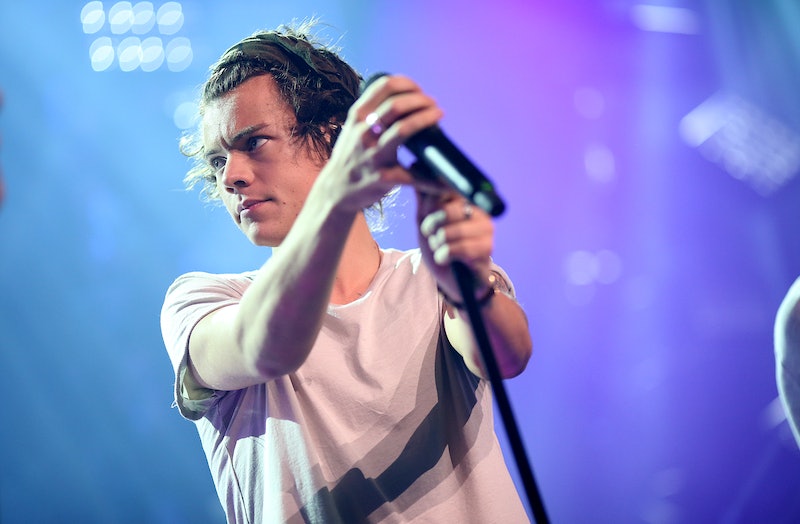 Oh, Fifty Shades of Grey, what have you done? As E.L. James taught us, there's nothing wrong with profiting off your fanfiction as long as you change all the names and drop any references to the source work. Then it's just called original fiction. This might be taking that principle a little too far, however. Deadline reports that United Talent Agency will be representing the screen rights to a WattPad novel called After, a breakout story about a girl who meets and falls in love with Harry Styles from One Direction.

According to the press release, After is the closest thing that WattPad has to Fifty Shades of Grey, which began as a Twilight fanfiction called Master of the Universe. It's a multimedia experience, with the author, Anna Todd, having made use of social media to get the word about her story out there. After has its own Twitter and its own Instagram, where Todd shared "photos, videos, songs, and art created by readers". WattPad general manager, Candice Faktor, believes that there's a high demand to see the story make it to the big screen.

The official summary of the story, which can still be read on WattPad and has amassed a total of almost 650 million reads, says:

Tessa Young is an 18 year old college student with a simple life, excellent grades, and a sweet boyfriend. She always has things planned out ahead of time, until she meets a rude boy named Harry, with too many tattoos and piercings who shatters her plans.

It's one thing to profit from a story that's based on a different story. In fact, that's technically legal, as the popularity of works like Wicked (which was based off The Wizard of Oz) and 10 Things I Hate About You (which was based off The Taming of the Shrew) have proven. Profiting from a story that's based on fictionalized versions of real people seems like a dangerous thing to attempt. It actually wouldn't be the first time a One Direction fanfiction left the privacy of the Internet, but, considering After is trying to make the jump from online to movie without a radically edited book version coming out to put anyone's thoughts at ease first, I can't see this going well.

Then there's the fact that Styles is described in the summary as being "rude". There are several instances that would easily disprove that characterization, such as when Styles offered immediate help to the 1975's Matt Healy during a prank phone call despite the fact that the two had never spoken before. The fact that Todd took her own interpretation of the singer will probably help her transition After into an original story or at least give her a leg to stand on if Styles' decides to get a lawyer involved. There's a good chance that he might just find it funny. Remember when One Direction band members Niall Horan and Louis Tomlinson acted out fanfiction on BBC Radio 1 back in 2013?

If Styles wants to break into an acting career, he can always volunteer to play himself in the movie.