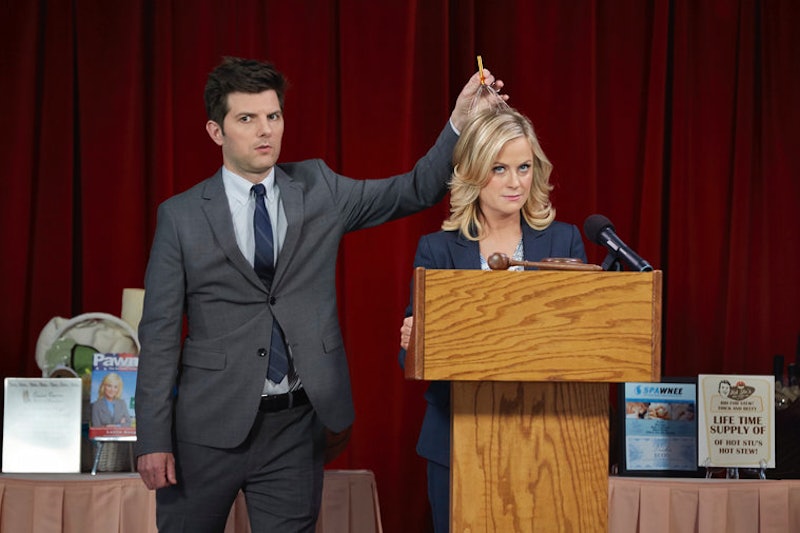 After "Flu Season 2" delivered the surprise that Leslie is pregnant, Parks and Rec fans had to wonder, what's next? There were still two episodes left in the sixth season, so another big reveal had to be ahead. In this week's "One in 8,000," there was a twist that no one could have seen coming as we learned that Leslie and Ben are having triplets. Well, technically you could've seen it coming if you researched the episode title, since it refers to the commonly cited odds of conceiving triplets, but for fans of the show, it was still a major shock and likely for many, a major disappointment.

Parks has developed its own form of realism. Even if Pawnee operates on its own set of rules with child-sized sodas and tons of crazy citizens who care enough to actually attend town hall meetings, when it comes to the show's main set of characters, they tend to be relatable and even at their most extreme avoid becoming caricatures. As passionate and talented as Leslie is, she doesn't get everything she wants because of realistic opposition. Tom is ambitious to the point of delusion, but his actual successful businesses were well-earned. Even over-the-top Craig has showed his human side as he tries to tone down his loudness for a new opportunity.

So when Parks gave Leslie triplets, it almost seemed like too much of a sitcom trope for the unique comedy, a twist for the sake of twists. However if you think about it, Leslie having triplets makes perfect sense. Why would a woman who's been an overachiever her whole life have one baby at a time like most other women? She's always trying to do more and be better, it's hardly surprising that the same can now be said of her pregnancy.

Having triplets might not even be as far-fetched as it seems. While the American Society for Reproductive Medicine listed the chances of naturally conceiving triplets at one in 10,000 in 2012, they also said that those chances increase if the mother is over 35. Let's give it to Parks on this one, for Leslie, having triplets actually makes sense.

But the show isn't completely off the hook yet. If Parks wants to maintain its realism, there is one ramification of Leslie having triplets that needs to be addressed—her career. Until now, Parks has largely focused on Leslie's career and this season has finally brought her an opportunity she deserves, to run the Chicago branch of the National Parks Service. She can finally carry out her ideas on a larger scale and get some of the recognition she's lacked from the increasingly unappreciative Pawnee residents.

When we first found out Leslie was pregnant, there was no need to worry about her new job at all. If there's anyone who can juggle a brand new, much bigger job and a newborn, it's Leslie Knope. But what about three newborns? That would be hard for anyone to manage, even Leslie Knope. And while the end of "One in 8,000" was meant to help Ben, and to a lesser extent Leslie, feel better about their surprising news, it may have done the opposite for viewers.

As the Parks and Recreation department gathered to offer their help to Leslie and Ben, it seemed like a sign that they would stay in Pawnee. Before that, the financially concerned Ben had debated whether they should move to Chicago where they can make more money, or stay in Pawnee where it's cheaper to live. But then the couple smiled as Donna offered her connections to the best preschools and April volunteered herself and Andy to babysit, and they seemed reassured by this promise of local help.

Next week marks Parks and Rec's season finale, which will probably reveal Leslie's decision—either that or that she's now having quadruplets. After spending so much time showing Leslie's career really takeoff, it would be cruel and uncharacteristic of the series to give her triplets as a way of stopping her from accepting an exciting new job.

Hopefully, instead of spending season seven watching Leslie bring her triplets to Pawnee City Hall, this year's finale will set her up to be an overachieving working mother, revitalizing the National Park Service while raising three amazing, ambitious children.