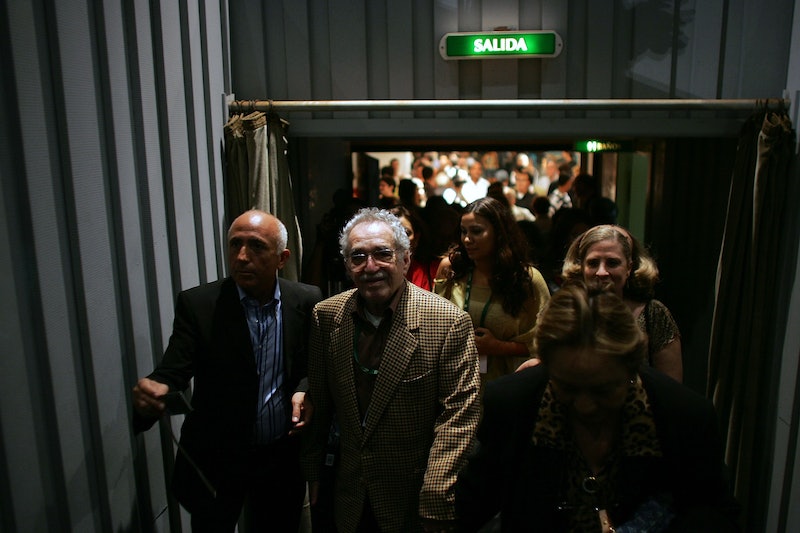 On Thursday, the world lost one of its greatest writers when sly master of magical realism and tender curator of surreal love stories Gabriel García Márquez died at age 87 in Mexico City. As the literary world grieves, many are returning to their favorite Márquez novels and short stories, poring over the beautiful passages in a sad and infinitely loving homage to this master.

Whether you've read through Márquez' entire oeuvre multiple times, or have never even heard of One Hundred Years of Solitude, there's no more poignant time to read Márquez than right now. Just don't be naïve; it's impossible to read Márquez without coming away seriously changed.

Whether you've never read a word of magical realism in your life, or whether you've practically been hardboiled in the genre, there's no denying its addictive qualities. Magical realism, unlike almost any other genre, makes our wildest dreams accessible and intensely believable. It incorporates fantastical elements into a "realistic" environment — flowers rain from an otherwise normal sky, a grandfather lives on for centuries but no one notices anything strange — so the world of magical realism is one where magic can and might happen on a regular basis, and nobody blinks an eye. The genre is better than fantasy, because it walks among us with a straight face.

2. You'll learn the power of a confident lie.

Márquez hit upon his distinctive voice by imitating the way his grandmother told stories. She used what he calls a "brick face," never changing her expression, even when the things she was recounting were fantastical to the point of absurdity. As a result, her audience was always shocked at the magical parts — and more inclined to believe them.

In much fiction, the author gives us pages of verbal sparring matches in order to illuminate the characters. Not Márquez. In his world, we go for pages without hearing anyone talk, and when they do, it's clever, odd, and fired off with the abruptness of a stand-up comic. In a typical piece of Márquesian dialogue, we are told about, rather than shown, the original question, and we only get the response:

She asked in immediate self-defense why his skin was as pale as wax.

"It's life over there, Mother," he said. "You turn green in Paris."

(From Love in the Time of Cholera.)

4. And love? Love in Márquez is all-consuming.

A Márquez romance is obsessive, extraordinary and really, really weird. Those hit with the frantic blessing of love may grow feverish (One Hundred Years of Solitude) or renounce their religion for a girl frothing with rabies (Of Love and Other Demons). A 90-year-old man may find the love of his life in a 14-year-old prostitute (Memories of My Melancholy Whores); two lovers can fall into each other's arms after half a century apart (Love in the Time of Cholera). Márquez makes the most implausible love stories feel vital, intense, and fraught with longing.

5. You'll be able to taste and smell and touch the Caribbean.

For North American readers, it's hard to overstate the effect Márquez' muggy, guava-scented, matter-of-factly fantastical world has on our realist, Puritanical literary senses. Reading through Márquez' oeuvre is a crash course in the folklore of the Caribbean, and by folklore, I of course mean reality…

It always amuses me that the biggest praise for my work comes for the imagination, while the truth is that there’s not a single line in all my work that does not have a basis in reality. The problem is that Caribbean reality resembles the wildest imagination.

6. Your views on what's "real" will change completely.

Sure, Márquez will occasionally try to trick you into believing him. An old journalist tactic that he often reached for involved using extremely specific details when describing fantastic events. He found that readers were more inclined to believe him when he described the exact number of weird items or the precise color of something strange. But for the most part, Márquez insisted that he was simply presenting reality as he saw it. Reality isn't just the road beneath your feet; it's also the "myths of the common people."

7. And you'll become obsessed with that "real."

"Life itself is the greatest source of inspiration and dreams are only a very small part of that torrent that is life.... I see dreams as part of life in general, but reality is much richer," Márquez told The Paris Review. His ability to channel his real-life hometown of Aracataca — the basis of the fictional Macondo — was one of his greatest coups as a writer, providing him with a near-endless stream of inspiration, without which we'd never have works like One Hundred Years of Solitude. Every writer should hunt for their Aracataca, whether they grew up there or just encountered it languishing along the side of a lonely highway. Look for a place that's real and yet not real, a setting that never stops inspiring.

8. Your own writing will change… maybe too much.

"García Márquez is a software that you install and then can’t get rid of," said Chilean writer Alberto Fuguet.

9. As a reader, you'll be treated with respect.

Márquez refused to sell the movie rights to One Hundred Years of Solitude, because he knew that readers held their own precious images of the novel in their imagination, and he didn't want to interrupt their sacred "margin of creativity." And critics? He didn't have much use for them, either, saying "I’ve always tried to be a very clear and precise writer, trying to reach the reader directly without having to go through the critic." Márquez is a reader's writer; you don't need an intermediary.

10. As a writer, you'll wonder why you can't write titles like that.

Memories of My Melancholy Whores? Chronicle of a Death Foretold? The General in His Labyrinth? "Sleeping Beauty and the Airplane"? "Seventeen Poisoned Englishmen"? "The Handsomest Drowned Man in the World"? "A Very Old Man with Enormous Wings"? "Monologue of Isabel Watching It Rain in Macondo"? Márquez' titles have an addictive fairytale rhythm all their own.

If characters can waste away for years without dying, if love can last for decades without becoming irrelevant, if small towns can blow away in a moment, if everyone has the same name, if nothing ever truly changes, and if realism is magic, well, then the rules of regular time, with which we approach daily life, start to seem irrelevant at best and boring at worst. So mourning a world where we no longer have Gabriel García Márquez is perhaps not the most Márquesian use of our energy. Who can say when or where Márquez time will lead next?

"Time was not passing...it was turning in a circle." —One Hundred Years of Solitude