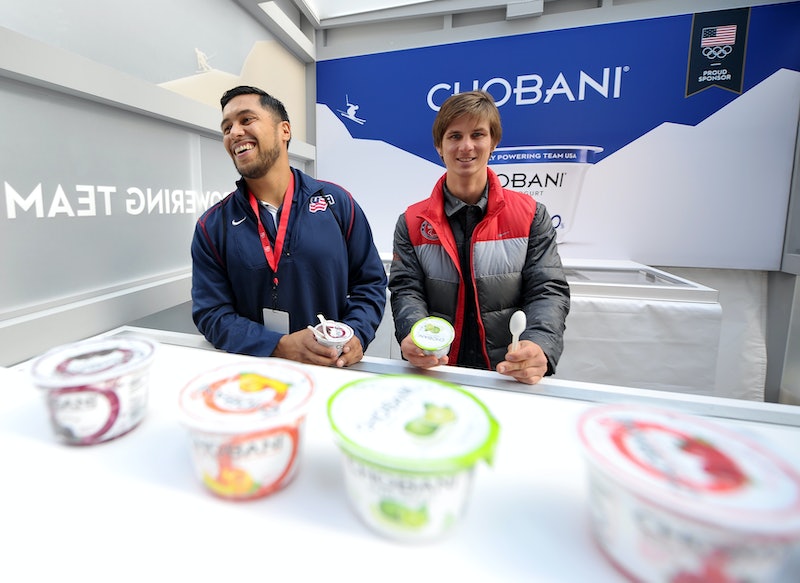 Breakfast just got a whole lot more exciting for Greek yogurt lovers: The top seller of Greek yogurt in the U.S., Chobani is branching out beyond the little fruit-filled yogurt cups they’re known for and into the great, wild, yogurt unknown. According to the Wall Street Journal, the new products Chobani will be introducing this summer and fall include pudding-like desserts, yogurt dips, and — perhaps most intriguingly — yogurt mixed with steel-cut oats to appeal to fans of oatmeal and protein bars. They’ll also start selling full-fat, plain yogurt for the first time, with larger containers available for those who like to cook with it.

But let’s get back to these oatmeal yogurt concoctions. Apparently it will be something similar to European-style muesli, with yogurt taking the place of the standard milk. So: If it’s pretty much muesli, why not call it muesli? Said Chobani marketing chief Peter McGuiness, the brand thought it would seem “too highfalutin” for its customers. 'Murica!

The dips, meanwhile, will likely appeal to fans of hummus and guacamole (and really, who doesn’t love hummus and guacamole?); and the pudding things? Chobani hopes they’ll be a competitor for ice cream. Both Ben and Jerry’s and Yoplait have put Greek frozen yogurt in the freezer cases of grocery stores everywhere already, so maybe these dulce de leche and raspberry dark chocolate creations are the next generation of Greek yogurt desserts.

Not going to lie: I’m actually most excited by the plain ol’ full-fat yogurt option. I don’t like sour cream, and I don’t generally keep heavy cream around unless I’ve planned for it in advance; I do, however, pretty much always have Greek yogurt in the fridge, so I cook with it all the time. It’s an excellent substitute for both sour and heavy cream in everything from chimichanga filling to baked goods, and it’s generally healthier, to boot.

The thing is, the only brand of Greek yogurt my significant other likes is Chobani. This means that whenever I cook with it, I have to carefully scrape out the yogurt from the little tub without accidentally dumping in any of the fruit—no small feat (although I’ll usually just eat the fruit afterwards, because yum). Now, SO will be able to get his Chobani, and I won’t have to perform some weird sort of separation-y science experiment every time I make dinner.

Apparently Chobani is also flirting with the idea of going public, although as 24/7 Wall Street points out, now may not actually be the best time for it. But I’ll be honest: I could care less about a Chobani IPO. I just want the yogurt. Also, it's Friday, so here. Have a GIF of a cat eating frozen yogurt: