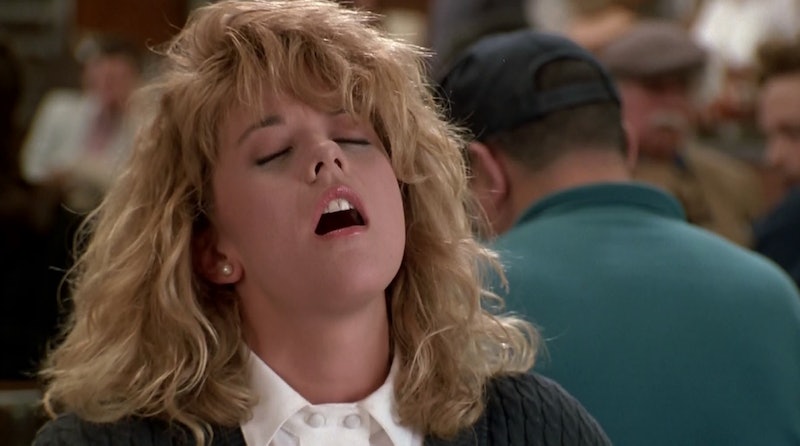 The dulcet sounds of female sexual pleasure have long captured the collective imagination. A passage from the ancient sex bible, the Kama Sutra, reads: “As a major part of moaning, she may use, according to her imagination, the cries of the dove, cuckoo, green pigeon, parrot, bee, nightingale, goose, duck, and partridge.”

Today, however, when we talk about “female copulatory vocalization,” we’re usually having a very specific discussion: are women faking it, and if so, why ? We ask whether these moans of pleasure are always uncontrollable or, rather, voluntary: a tool for encouraging the male partner to reach orgasm, even if the woman won’t get there herself (because she’s bored or tired or just wants to eat a sandwich and go to sleep).

In 2011 in the Archives of Sexual Behavior, Gayle Brewer and Colin Hendrie published their research on female copulatory vocalization, finding that 66 percent of women make noises in the hopes that their partners will climax faster. 87 percent moaned to boost his self-confidence. Hendrie and Brewer wrote, “While female orgasms were most commonly experienced during foreplay, copulatory vocalizations were reported to be made most often before and simultaneously with male ejaculation.”

But human ladies aren’t the only ones screaming. There's a whole science behind primate copulation calls, begging the question: why are we (evolutionarily) programmed to vocalize sexual pleasure? British primatologist Stuart Semple notes, “In a wide variety of species, females vocalize just before, during or immediately after they mate. These vocalizations are particularly common among the primates and evidence is now accumulating that by calling, a female incites males in her group.”

Baboons are notorious for their copulation calls, but do they fake it, as human women often do, to end sex, encourage their partner, or relieve boredom? This doesn't seem to make any logical sense, as faking it falsely signals to the male he’s doing everything right, thus perpetuating terrible sex. Yet female macaque monkeys get loud to help their male partner orgasm, just like us.

In the delightful 2010 book Sex at Dawn, authors Christopher Ryan and Cacilda Jetha cite a study on the copulatory vocalizations of several primates, including three female primates. William J. Hamilton and Patricia C. Arrowed, who conducted the 1978 study, point out that, for baboons, “in spite of the risk of exposure of individuals and the troop to predators, these baboons habitually call during copulation, [so] the calls must have some adaptive value.” Some hypothesize that females cry during sex to “activate the male’s ejaculatory reflex.” Ryan and Jetha deem it far more likely that female copulatory vocalization attracts males "to the ovulating, sexually receptive female, thus promoting sperm competition, with all its attendant benefits — both reproductive and social.”

So maybe this sexual disingenuity isn't so deplorable. On CNN.com, sex educator Logan Levkoff points out that forced vocalization can be an important means of communication, especially when both sides participate.

Women understand that moaning is a turn-on for guys, and many women ultimately enjoy it because they’ve made an effort to push a little beyond what comes naturally…But sexual self-esteem is a two-way street, and, for their part during sex, guys should aim for more than a single grunt at the end. It’s not about faking or doing something you don’t want to, but more about being sexually present and in sync with each other.

The nature of our noises vary, too, depending on how close we are to ovulation, or even on the social status of the male we’re with (calls were “longer and contained more distinct sonic units during mating with higher-ranked males”). Do higher-status guys turn us on more? Or do we simply feel more pressure to turn them on and make them think we are enjoying ourselves?

New research, in a perfect embodiment of the term "fake it 'til you make it," indicates that women may be making a lot of noise during sex to turn themselves on. A recent study in the Journal of Sexual Archives, conducted by researchers from Temple University and Kenyon College, found that pretending to enjoy sex and exaggerating arousal can actually make the experience more pleasurable.

In this case, I wholeheartedly encourage such noisemaking. In the case of faking it to speed sex along, I urge women to use their words to communicate what they really want: whether its more consistent clitoral stimulation, or for the guy to run out and pick up a pizza. I promise there are more honest, productive, and rewarding ways to end unsatisfactory sex than pretending it's been good for you.

More like this
What Is The Forest Personality Test? The TikTok Trend, Explained
By Georgina Lawton
How To Do The Intimacy-Boosting Lotus Sex Position
By Laken Howard and Lexi Inks
The Best Time To Date After A Breakup, According To Experts
By Bustle Editors
Jennifer Coolidge Got A Lot Of “Action” Thanks To 'American Pie'
By Catharina Cheung
Get Even More From Bustle — Sign Up For The Newsletter