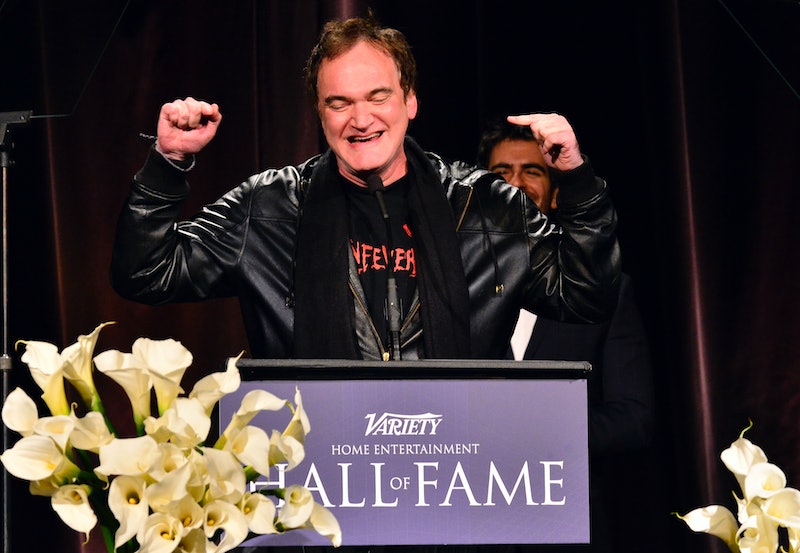 It was clear back in January that the leaking of Quentin Tarantino's latest script had shaken the director pretty deeply. He declared himself "very, very depressed" about it, pulling the film from the production train, and even sued Gawker for spreading a link to the leaked script around. Now, though, Tarantino's Hateful Eight might find new life.

Tarantino recently held a live-reading of the script at the Ace Hotel in Los Angeles, and informed the crowd there that prospects of the script's filmic future might not be as dead as they once seemed — he's writing another draft, with a different ending than the one the world's already peeked at.

The version of the script Tarantino was so upset everyone'd been spoiled on culminated in the entire cast dying in a shoot-out; it was the last part in what Tarantino describes as a five "chapter" script, and it's that last act he's planning on changing completely. Though he didn't outright say it was because everyone'd already read it, it seems safe to say it likely had something to do with his hatred of the script's spoiling.

According to The Hollywood Reporter the script is "a combination of Western and Agatha Christie-style whodunnit, as various men and women engage in conversation and shootings in the haberdashery." We would like to commend THR's Stephen Galloway for using the word haberdashery so delightfully.

The cast for the live reading may also very well reflect something of what we'll see onscreen now that it seems production might move forward: Those present included Kurt Russell, Tarantino favorites Samuel L. Jackson and Tim Roth, Amber Tamblyn, and Walton Goggins. Also Bruce Dern, who was once in Tarantino's top two suspects for having leaked the script in the first place — it seems he's been forgiven or proven innocent.