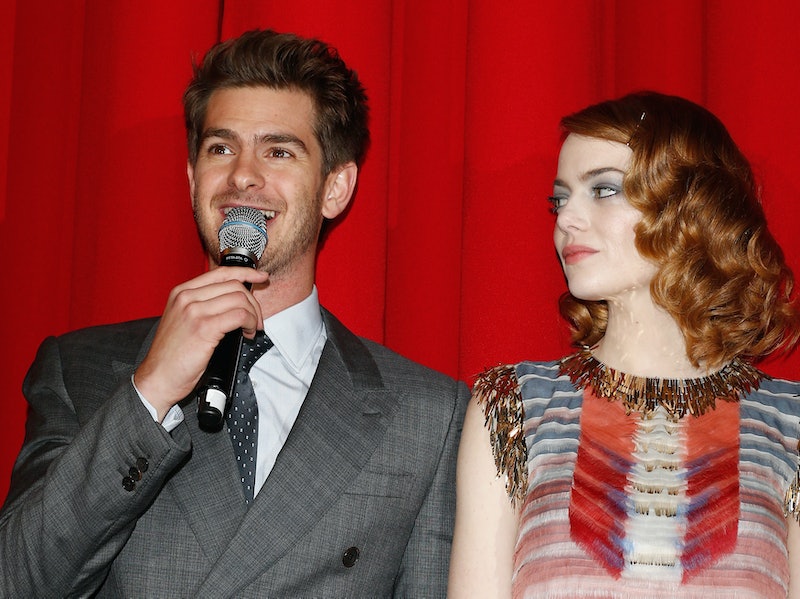 The Amazing Spider-Man 2 press tour has been a whirlwind. Mainly a whirlwind of Emma Stone's fervent love of the Spice Girls. There was a moment, though, that was about more than superhero blockbusters and '00s girl bands, and that was when Emma Stone called Andrew Garfield out on some casual misogyny. And it was beautiful.

There's something tricky about sexism. Like with racism, sexist thought patterns are not exclusive to raging, frequent misogynists, and sometimes, casual, inadvertently sexist comments get overlooked because hey, they're "not that bad." Someone who is actively feminist in many other aspects of their lives can still find themselves falling victim to deeply embedded patriarchal thought, though — it could be your brother, your lover, your best friend, or even you. Very few people are completely immune.

Which is why this exchange, in which Stone calls out Garfield — her boyfriend and co-worker of three years, so obviously someone she loves and respects — is a useful moment. Because it's not interesting because "Oh lord, Andrew Garfield's revealed himself as the raging sexist he always was!" That'd be an oversimplification that helps approximately no one. No, it's useful because it peels a layer back on the kind of casual misogyny that's the hardest to get rid of.

Here's what Garfield said, commenting on the costume of his character, Spider-Man:

He made it. He made it with his bare hands. He sewed it. He took some sewing classes and some needlepoint classes. It's kind of a feminine thing to do. He made a very masculine costume out of a very feminine—

Which piqued Stone's interest, her response immediately putting him on the defense:

Stone: It's feminine how?

Garfield: It's amazing how you took that as an insult.

Stone: No, I'm not taking that as an insult, I'm asking how it's feminine

Garfield: It's feminine because I would say femininity is about more delicacy and precision and detail work and craftsmanship. Like my mother, she's an amazing craftsman. She in fact made my first Spider-Man costume when I was three, so I use it as a compliment

This isn't the same level of blatant misogyny as, say, Candace Cameron Bure claiming that women should be submissive to their husbands in marriage, or Bill O'Reilly trying to eek out some problem with a female president based off her gender. This is the subtle, tricky kind, the kind you find in people's analysis of Sansa Stark on Game Of Thrones or casually thrown into a Facebook comment about Zooey Deschanel or Kristen Stewart: It's the kind that straight-up baffles the people making the comments if you point out that what they're saying or thinking is, you know, maybe spurting directly from centuries of patriarchy.

It's one of the sneakiest types of misogyny, and we'd like to extend a round of applause to Emma Stone for not hesitating to call Garfield out about it in public. It's the kind of thing that could have easily been brought up later behind closed doors and out of the eyes of lurking PR people, but we're glad that's not how it went down. Because sometimes it is your co-worker, or your friend, or your long-term boyfriend who baffles you with a little burst of misogyny. And sometimes you just gotta call that shit out. Well done, Emma.