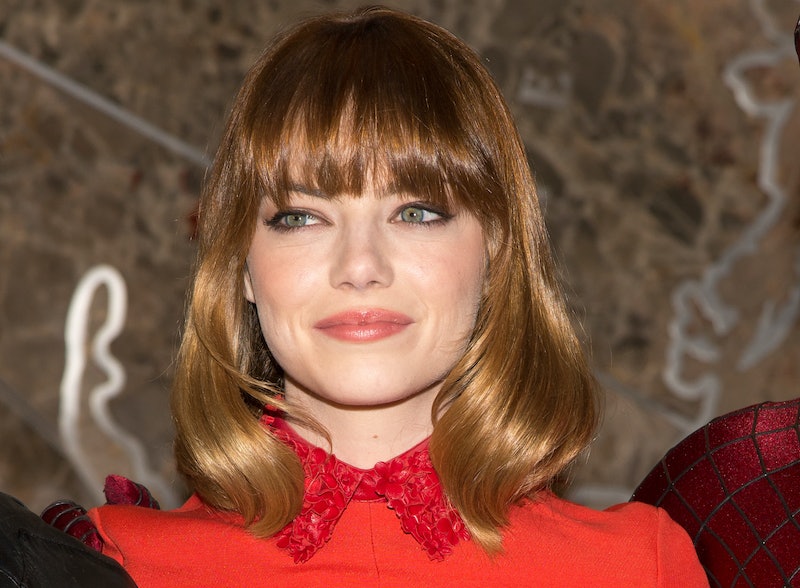 Emma Stone, Jamie Foxx, and Andrew Garfield are currently touring to promote The Amazing Spider-Man 2, but they're raising a lot less awareness for the movie than they are for the Spice Girls. Stone is a self-proclaimed superfan who broke down crying when she received a call from Mel B, aka Scary Spice, on Australia 2 Day . This was followed by a similar breakdown when she met Mel C face-to-cyber-face on Capital Breakfast and then a moment on Jimmy Kimmel wherein she showed off her ability to copy the girls' signatures. Her latest dip into the Spice Girls fandom was a prank on The Graham Norton Show , before which Stone finally said what we've all been thinking.

"I just feel like I've been talking more about the Spice Girls on this press tour than I have about the movie," she said. It might not necessarily be true, but her Spice Girls obsession has definitely been getting more media attention than the movie itself. In fact, it's beginning to seem as though Stone can't give an interview at all without expecting to be asked about something relating to the Spice Girls at some point in the proceedings.

On the one hand, it's understandable. The world's obsession with the Spice Girls didn't end when the band broke up. (Raise your hands if you still know all the words to "Spice Up Your Life".) If you got as many opportunities to talk to and about them as Stone is getting, wouldn't you take each and every one? Still, that doesn't explain everyone's obsession with her obsession. We have a few theories.

1. They Can't Talk About Her Personal Life

For as long as Stone has been dating her co-star Andrew Garfield, she has been making fine use of her right as a human being not to talk about it. They may be the cutest couple the world has ever seen, but not even Ellen DeGeneres can wring an answer out of the two about their relationship status. Outside of whatever movie or show a celebrity is appearing in, their social lives are the top news bites. With Garfield having recently slammed the press for prying, it makes sense that Stone's Spice Girls obsession would be something to latch on to.

2. Emma Stone is Working for the Spice Girls

Remember when the news broke that a Backstreet Boys/Spice Girls world tour might be in the works? Remember how it sent all our hearts racing as we broke out our mint condition copies of Spice World and Black & Blue? Stone outed herself as a Spice Girls fan as far back as 2012, which gave the band plenty of time to contact her about building hype for their tour. Maybe Baby Spice was even the one to do it. That would certainly explain why, despite her repeated statements that Emma Bunton is her favorite, Stone has yet to get the opportunity to talk to her.

Let's be real. There is nothing cuter than the way Stone's eyes start glistening and the way she covers her face to hide the very real emotional impact that meeting the Spice Girls has on her. If you got to FaceTime with any of the band, would your eyes be dry by the end of it? Stone is the queen of comedy and a big name out there right now, so seeing her break down crying over a childhood dream come true just makes her so relatable to all of us. We can't get enough.

Personally, we're hoping the Spice Girls gag is an indication that the second reunion tour isn't as dead in the water as we're starting to think. At the rate she's going, we'll probably end up front row with Emma Stone screaming next to us.

Watch the prank on The Graham Norton Show below.