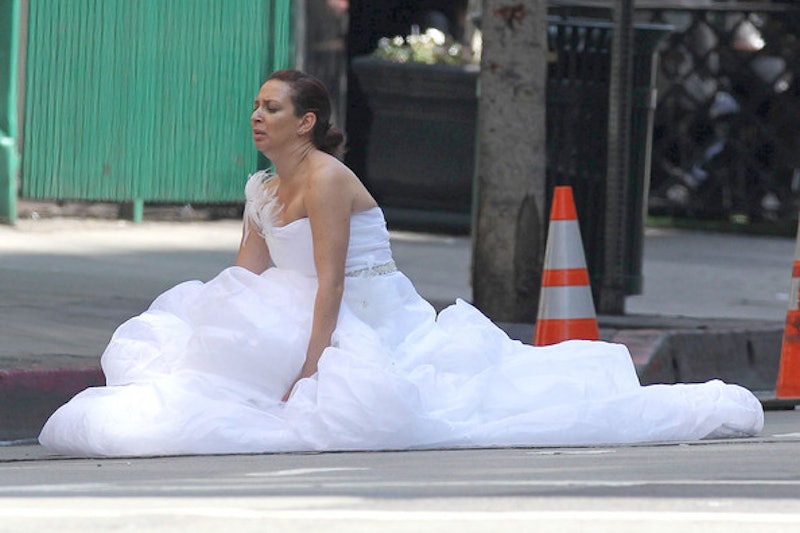 As much as I'm excited for my wedding (less than three weeks to go, baby!), I'm even more excited for it to be over and done with. I know it's supposed to be a day that I will cherish forever but, as I'm realizing, outside forces are making it one hell of an annoying task. It's not the flowers, or the venue, or the fact that my wedding planner and I can't speak the same language. The real ridiculousness is coming from — you guessed it — the guests themselves.

I knew planning a wedding wouldn't be easy, but I had no idea just how aggravating it would be. If you're thinking of going down this dark, dark road, here are some things you can expect people to throw at you.

PEOPLE WILL ASK IF THEY’RE INVITED...

...the second after they find out you're engaged. I started getting texts, emails, and Facebook messages from people asking if they were invited immediately. No, random-person-I-had-one-class-with-in-high-school-who-I-haven’t-seen-in-10-years, you are not invited.

YOUR GIRLFRIENDS WILL ASK TO BE BRIDESMAIDS

Initially, I didn’t want bridesmaids. But then, over brunch one Saturday afternoon at Balthazar, a friend asked me if she could be one right before I had a chance to tell her I wasn't having bridesmaids. And that was that.

After the first bridesmaid declared herself, I had to wrangle up others whom I thought merited such an honor. One friend, who wasn't originally included on the list, made a tearful plea via text pointing out all the reasons that she would be ideal bridesmaid material. I relented, because no one should be crying over whether or not they're a bridesmaid. I also seriously considered changing my phone number and canceling the whole thing.

YOU WILL, MAGICALLY, BE PUT ON EVERY BRIDAL EMAIL LIST POSSIBLE

I’m not sure how it happened, but even before I started trying on dresses, I started getting emails, magazines, and catalogs in the mail for wedding and homemaker type stuff. I tried to shame the "comedian" into revealing themselves on Facebook, but no such luck.

YOUR IDEAS WILL BE PRAISED (BUT WITH A CAVEAT)

“I love that idea! But when I get married, I’ll do [insert something else] instead.”

Someone with a last name similar to mine on the registry site tracked down my email and told me my registry is “pretentious.” After looking up hers (because of course I had to) and noting the squirrel solar lights, I can see why she felt that way.

DUDES FROM YOUR PAST WILL REMARKABLY START EMAILING YOU

It doesn’t matter if you’ve blocked each other on every social media platform in the world, they’ll find out. Then they will email. A. Lot. Do you know what it's like to get an email from an ex stating, "I'm shocked you found someone batshit crazy enough to want to be with you?" I do.

THERE WILL BE TEARS. (AND NOT NECESSARILY YOURS)

“What do you mean I don’t get a plus one?! I PLAN TO HAVE A BOYFRIEND BY THEN.”

Yeah, I’m just ignoring those two, because I. Can’t. Even.

And PEOPLE Who Were Invited WILL IGNORE YOUR RSVP DATE, YOUR ‘GENTLE’ REMINDER, AND YOUR ‘WTF’ TEXT

I’m going to assume aliens have kidnapped this particular person at this point. I haven’t seen her on Instagram or Facebook in weeks, so it sort of makes sense.

Everyone WILL GIVE YOU UNSOLICTED WEDDING ADVICE

My gynecologist thought the best time to talk to me about how to manage my wedding day stress was when she had a speculum in my vagina: "Just have some champagne and go with it. But don't forget to take your Pill. You wouldn't believe how many people get pregnant on their honeymoon because they forget to take their birth control during wedding week chaos." Take pill every day. Noted.

YOUR SISTER WILL TRY TO MAKE IT HER WEDDING

I understand that she didn’t get a chance to do everything she wanted with her wedding, but she can renew her vows in a few years.

She all but begged to be invited, then sent an email telling me it was selfish of me to have a wedding in such an expensive place. OK, "friend."

THERE WILL BE DEMANDS ABOUT THE FOOD

Everyone and their mother apparently has a food allergy. I'm tempted to serve raw liver at this point.

Yeah, I get it: You all want Beyoncé.

Because they're cute and $42 that I can't afford after this wedding, OK?

YOU WILL REALIZE, AFTER IT'S TOO LATE, THAT YOU AND YOUR FATHER ACTUALLY CAN'T WALTZ

It appears that it doesn't matter how many times my father and I watch Connie and Vito's dance in The Godfather. We're just not getting it.

In turn, she will threaten to never pay for another wedding again if "you're going to be so uptight about the wording!"

A fancy up-do that will be done by a bunch of drunken girls whom you regard as your closest friends but who are also the worst hairstylists.

YOU WILL NOT GET A BACHELORETTE PARTY because

Of course i don't want one.

...and then YOUR SELF-APPOINTED BRIDESMAIDS TOOK YOU SERIOUSLY

Seriously, ladies, could you not see through the thinly-veiled lie? Could you have at least gathered round a bottle of champagne and told me I'm pretty while braiding my hair?

AFTER YOUR FINAL DRESS FITTING, YOU WILL REALIZE THAT YOUR WEDDING DIET NEVER ACTUALLY HAPPENED

I tried, I really did. But the pizza ... the pizza called to me.

"Well, Olivier, if your family could speaking fucking English, I wouldn't have have to print up two of everything!"

YOU WILL ARGUE with your betrothed OVER YOUR SONG

BECAUSE HE THINKS 'LOVER'S SPIT' BY BROKEN SOCIAL SCENE IS DEPRESSING

ALTHOUGH YOU'VE VOWED TO QUIT DRINKING, YOU'LL PROBABLY INCORPORATE WINE INTO EVERY MEAL JUST TO DEAL

YOU WILL SERIOUSLY CONSIDER ELOPING

But it will be too late

So good thing you will still, somehow, totally want to spend the rest of your life with this person

More like this
The Best Time To Date After A Breakup, According To Experts
By Bustle Editors
20 Things You Should Never Tolerate In A Relationship
By Rachel Sanoff and Kathleen Ferraro
12 Ways You're Sabotaging Your Love Life
By Teresa Newsome and Lexi Inks
Your Daily Horoscope August 11, 2022
By Mecca Woods
Get Even More From Bustle — Sign Up For The Newsletter