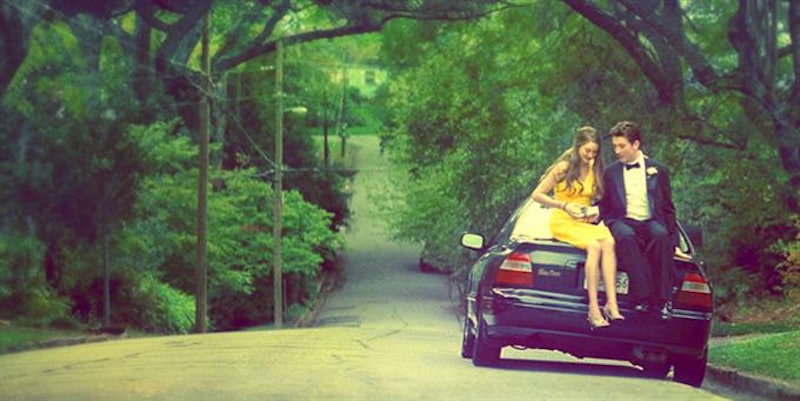 Watching the intro to The Spectacular Now, one hears Sutter Keely, played by Miles Teller, reading us the story of his recent break-up. It's an introduction we've heard 1,000 times, but if for one second you are taken in by the familiarity, both of Teller's voice and that particular element of teenager-dom, don't be fooled. The Spectacular Now, a coming-of-age story, is the most real movie you're going to see this summer, aching with tenderness and imbuing the audience with a painful, yet sweet feeling of either what we've known or what we're currently experiencing.

It tells the story of Sutter and Aimee Finnicky (Shailene Woodley), two youths brought together by chance, united by dysfunction and hope, and their wild ride of self-revelation, growing up, and coping with the trials of being 17 with their entire life in front of them. In the midst of all that, it weaves a Little Miss Sunshine-esque picture of family into a wider landscape of experiences that feel very close and bleed authenticity. With a stunningly talented young cast, excellent plot, and beautiful, spare cinematography, the film seems crowded with things to pick out as one's favorite, yet it is the seamless dialogue, authentic and smooth, that will win you over and keep you thinking about this movie for the next few months.

Movies often struggle to convey high school as the multifaceted, shitty, but amazing mess that it is. But this is not an issue that troubles The Spectacular Now. The slow start of Sutter and Aimee's love is an homage to the people you knew in high school and to the dreams we all entertained of the popular guy wanting the quiet girl, that fateful pairing of the smooth-talker and the ingenue. Imperfect, impulsive, yet somehow hopeful, like the movie itself, Sutter and Aimee carry us through, reminding us of how bittersweet it was to grow up.

You don't have to be an alcoholic or a nerd or reduce yourself to any label to identify with the boredom and fear that Sutter uses as an excuse for living in the now, or the naive doggedness Aimee exhibits as she tries to make her own path out of a repressed home situation. The Spectacular Now flawlessly tackles each separate component of being 17 and maybe in love, and definitely scared of the future, individually. It weaves those components together to steal our hearts and leave us pondering how high school changed us, whether we were the Aimee or the Sutter of our own private narratives, or if we were both.

The Spectacular Now also reminds us of the hurt we felt when we realized real life wasn't all individuality and freedom. High school movies too often capture only one angle of the entire experience (being the princess, jock, nerd, etc.), and, as such, we have a more difficult time relating to cinema's teenagers. But director James Ponsoldt's moving snapshot of high school serves to remind us that we have a lot to learn from multi-dimensional 17-year-old characters, not to mention the teenagers that surround us in real life. And The Spectacular Now's ability to force us to consider our own real existences while watching Sutter and Aimee's on-screen experiences is part of what makes it so special.

But there's also the unbridled talent of Spectacular Now's cast. Teller is charming and dexterous in his portrayal of Sutter Keely, a broken but upbeat character that finds himself through love and failure, but the film's real star is Woodley, who shines, makeup-free, as the girl every single one of us overlooked. Her Aimee is so quietly captivating, it doesn't even seem like Woodley's acting. The moment that Sutter and Aimee first kiss is shocking in its simplicity, and shattering in its realness. Watching it, I sat there astounded, wishing it had been my first kiss, which speaks to the power of the story, written by Tim Tharp and brought alive by Scott Neustadter (the movie's screenwriter).

The Spectacular Now is the kind of movie you'll treasure for its ability to bring back the best moments of adolescence, so see it Aug. 2, think about it, see it again, and you can thank me later.

More like this
The 'Spiderhead' Movie Ending Is Nothing Like The Short Story It’s Based On
By Morgan Leigh Davies
Everything To Know About 'My Big Fat Greek Wedding 3'
By Grace Wehniainen
Alicia Silverstone Has Recreated An Iconic 'Clueless' Scene
By Frances Stewart
Emma Thompson, Lashana Lynch, & Stephen Graham Lead Netflix’s 'Matilda'
By Sophie McEvoy
Get Even More From Bustle — Sign Up For The Newsletter