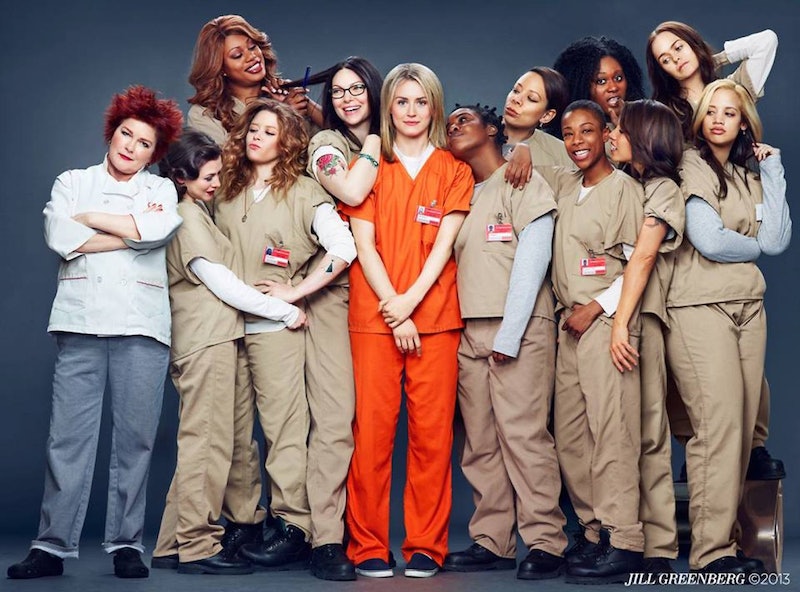 One thing's for certain: there ain't no way Orange is The New Black would ever fail a TV version of the Bechdel Test. With far more than two named female characters talking about things outside of a man in their lives, the Jenji Kohan series has shown that ladies make just as interesting a viewpoint as the boys. Because women are sort of killing it right now in entertainment. And that fact makes one of the series' stars Laura Prepon — and all of us here at Bustle — very, very happy.

After being thrown in jail for her days as an international drug dealer, Alex Vause had her life completely changed in a drastic way. She's not a cookie-cutter character with a decidedly "good" or "bad" bent, because, well — it's not that simple. "Alex is a really complex, awesome girl," explained Prepon. And complicated women like Vause, her ex-girlfriend on the series Piper, or even the women of WGN America's Salem show that nobody — not even women — are perfect, but it's that richness of life that makes these roles so exciting for female actresses. Finally women are able to really cut their teeth on something different.

"As an actress, you couldn't ask for a better working environment. These women are strong and awesome and it's hard to find one role like an Alex Vause," she explained. But therein lies the difference. "To then have like, fifteen of them? Fifteen of these awesome characters and strong women? It's like, unheard of."

"I literally cannot wait for the call about season three so that I know I'm going to play her again," the actress quipped. And it shows. "There's no blanket statement of 'oh they're prisoners, so that means they're all terrible people.'" Instead the humanity of the women is put on display, tearing them down and building them up in equal measure.

"When you put these women in this environment they're literally stripped of everything. They have no creature comforts and you put them in this environment you truly see who these people are." A vast difference from how most women have been pigeonholed throughout entertainment, but through these new inroads into the female existence, ingenuity and interest is born. "The way that these women navigate through it all is pretty incredible. All of these women are so different," observed Prepon. "And it works."

Prepon herself is clearly jazzed on the prospect of being involved in such groundbreaking television. And to have the fanbase be as obsessive and invested as they are? It only adds fuel to the actresses' fire to continue investigating these women. "As an actor you really hope people are going to watch the show that you're on and love the character that you're playing." To see it all come together for fans like it did for the cast? "It's awesome," Prepon declared.

"It’s like this awesome mosh pit of crazy rad characters, and they're all strong women of different shapes and sizes and creed and it’s incredible to watch it unfold."

Orange is The New Black returns June 6th to Netflix.

More like this
Amanda Gorman Shared A Powerful Message On Meghan Markle’s Penultimate Podcast
By Darshita Goyal
Claire Foy & Rooney Mara Revisit A Devastating Tale In 'Women Talking'
By Bustle UK
This 'White Lotus' Symbol Could Hint At A Major Character's Death
By Grace Wehniainen
The Kenan & Kel Reunion On SNL Took A Dramatic Turn, Thanks To Keke Palmer
By Brad Witter
Get Even More From Bustle — Sign Up For The Newsletter