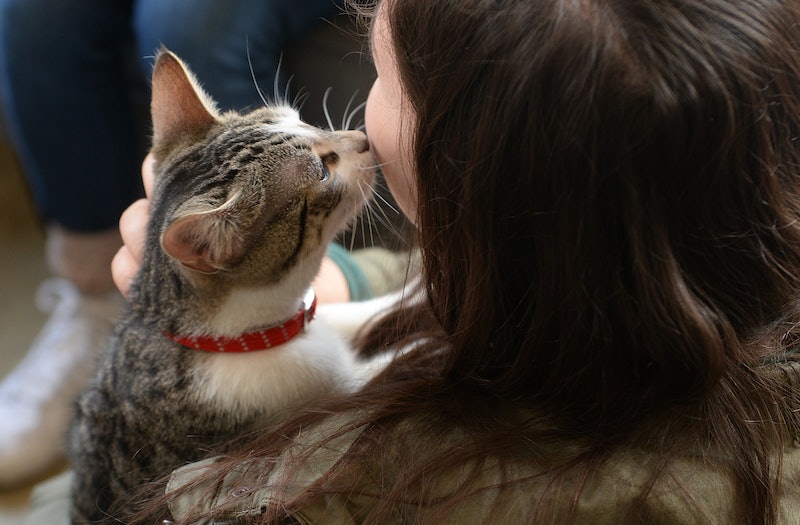 I first encountered the concept of cat cafés (for the uninitiated, these are places where you can sip coffee while playing with cuddly, adorable cats) while watching An Idiot Abroad on Netflix (which, by the way, everyone should watch. Everyone). That particular cat café was in Japan; the next thing I knew, though, I heard about one popping up in London, too. There’s one apparently coming San Francisco soon as well, and with all these establishments opening their doors, I couldn’t help but wonder: When are we going to get a cat café in New York? The answer: Now. Right now. Yessssss!

According to Gothamist, Purina ONE is opening a popup cat café this Thursday, April 24 in the Manhattan event space 168 Bowery. It’ll be there through Sunday, April 27. You can stop by any time between 10 a.m. and 7 p.m. for a drink, a snack, and some much-needed kitty playtime. We don’t know exactly who’s supplying the food and drink yet, but rumor has it that it’s a well-known Brooklyn roaster. I’m going to guess Cafe Grumpy, mostly because the Café Grumpy/Grumpy Cat crossover is inevitable, but I might be wrong. In any event, the coffee and edibles will be free, so it’s a win either way.

What’s the point of a cat café? You go. You drink tea or coffee. And you play with a whole bunch of cats who happen to live on the premises. I think it’s supposed to be a stress-relief thing; in Japan, I think it also serves as a way for cat lovers living in no-pet apartments to get their fill of the furry friends they can’t keep at home. The Purina one, however, is backing an awesome cause, too: All the cats will be available for adoption. The café is opening up in conjunction with the Long Island-based rescue organization North Shore Animal League, so if you totally fall in love with one, you can give it an amazing new home. I already live with two cats and a boyfriend, but I’m absolutely positive I’m going to want to take home every single kitty there. It’s going to be a struggle not to do so. Siiiiiiigh.

For more info, check out the cat café’s official website at PurinaONE.com. Meow!