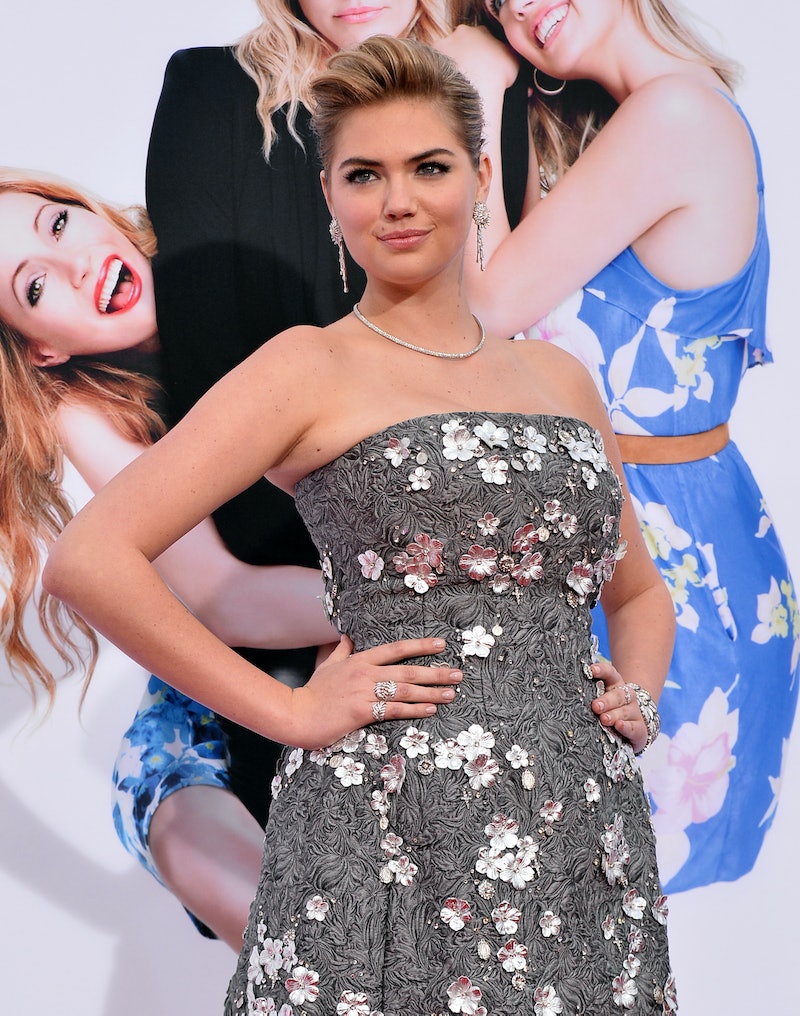 Well, this is troubling. Apparently, as a 21-year old supermodel who's dating in Hollywood, Kate Upton has never heard of anyone three-timing anyone else. The model-turned actress talked to E! news about her ideal man and according to the interview, Upton is unfamiliar with the plot of her new film The Other Woman . Which I find really hard to believe and makes me really concerned for her, but okay. Upton's been in the business of making me worry about her lately — last week when she claimed to want Cameron Diaz's body — but here I am, even more concerned, that she's blissfully unaware that cheating on your partner with multiple other people is something that happens in real life.

Upton told E!, "I've never personally heard a story like this. Hopefully no men relate to the character of Mark." I guess you could say that "personally" means that she doesn't have anyone close to her that's had this experience, but even so, cheating exists and she's definitely heard about it at least once. It's not like she's been living under a rock all of these years.

Where was Upton when the Tiger Woods scandal was happening? Or when Jesse James became The World's Worst Human for cheating on America's Sweetheart Sandra Bullock? Yes, Nikolaj Coster-Waldau's character in The Other Woman, Mark, sounds like he's an exceptional case of douchebaggery, but he's not the first and surely not the last person to cheat on their significant other with more than one person in film, and off.

Upton also said that if you DO identify with Mark, "You really need to reevaluate your life because we created a character who is pathological." Harsh, but totally true. Cheating really just isn't cool, guys.

But here's the thing that doesn't really make sense in all of this — Upton admitted to the Daily Mail that she HAS been cheated on on Wednesday. She didn't say who, but she confirmed that she'd gone through the betrayal and advised that the best revenge is to cut the person out of your life completely. The model said:

I personally think the best revenge is just walking away and not wasting another second of your time with someone who’s clearly emotionally handicapped. I think if someone hurts you in that way, it’s not your job to change him, and it’s not your job to be there while he’s finding himself, and finding who he is.

Which, again, is harsh but true. I don't want to sound paranoid about life or anything, but if Upton has experienced cheating firsthand, how would she not then assume that if a person could cheat on you with one person, they could do it with more people?

Considering Upton's dated her fair share of "bad boys" (we're looking at you, Maksim Chmerkovskiy), I'd like to assume that she's not running around Hollywood with no reservations about romance. There's trusting the people you invite into your life and then there's just throwing yourself to the wolves — and saying you're not familiar with the "player" type, is more or less making you an easy target.

Maybe this is just a case of being taken out of context, but if not — wise up, Upton, because Hollywood relationships aren't pretty — just look at Gwyneth Paltrow's marriage.

More like this
Twitter Is Identifying With Sally Field & Jane Fonda’s Friendship In New Viral Video
By Jake Viswanath
RHOP’s Robyn Dixon Explained Why Juan Paid For Another Woman's Hotel Room
By Brad Witter
Pamela Anderson’s Dating & Marriage History Could Be Its Own TV Series
By Jake Viswanath
Meghan Trainor & Daryl Sabara Are Expecting Their Second Baby
By Jake Viswanath
Get Even More From Bustle — Sign Up For The Newsletter
From hair trends to relationship advice, our daily newsletter has everything you need to sound like a person who’s on TikTok, even if you aren’t.