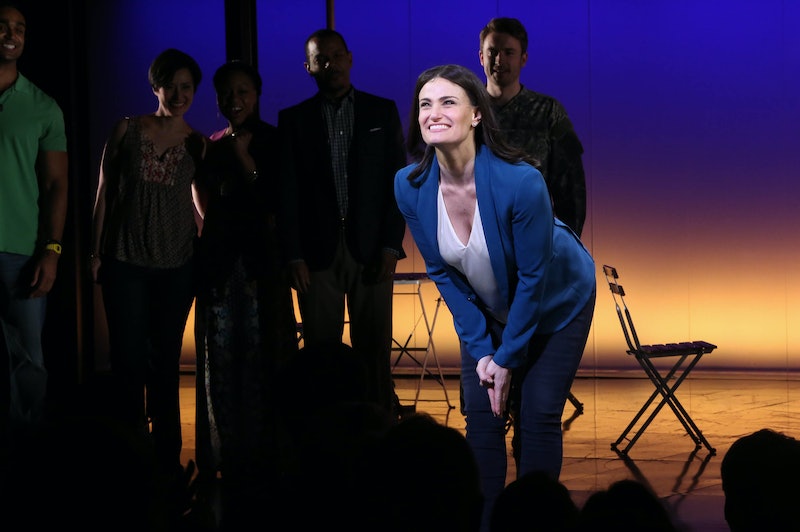 Here is an important fact about me: my whole teen life was defined by Rent. So, you can likely imagine how delighted I was — albeit, slightly jealous — when I saw this video of Idina Menzel singing " Take Me Or Leave Me" with two fans. THIS WOULD HAVE BEEN MY TEEN DREAM COME TRUE.

The singer, whose popularity has risen to new heights with the success of Frozen and its ubiquitous and triumphant "Let It Go," is currently starring on Broadway in If/Then, and at the end of a curtain call, she invited up Sarah Elizabeth Smith and Blythe Brock, who won the opportunity to sing the belt-a-thon on stage with her.

"Take Me Or Leave Me" is super relevant to Menzel's career; Rent is actually where Idina Menzel got her start. She originated the role of Maureen, the recently-turned-lesbian performance artist, in the 1996 musical about love, art, and the AIDS crisis in NYC. She also tackled the role again in 2005's movie version of the film, which was met with lukewarm reviews, especially considering the majority of the cast seemed a tad too old to be playing twentysomethings. Still, another nine years has gone by, but her vocal prowess is still phenomenal. The girl can...ahem, defy gravity . (YES, I CONCEDE. I AM A MUSICAL THEATER NERD.)

Watch the video of Menzel and her lucky fans below. And then go into your shower and belt it out yourself...t hat's what I plan on doing later, anyway.

More like this
Zayn Malik Just Revived One Direction With Their Most Romantic Song
By Maxine Harrison
Twitter Is At Odds Over Taylor Swift’s Possible ‘All Too Well’ Oscar Run
By Brad Witter
What Is Ben Affleck's Net Worth? At 50, The Oscar Winner Makes 8 Figures Per Film
By Meg Walters
Someone Must Pay For What Happens To Bad Bunny In 'Bullet Train'
By Arya Roshanian
Get Even More From Bustle — Sign Up For The Newsletter