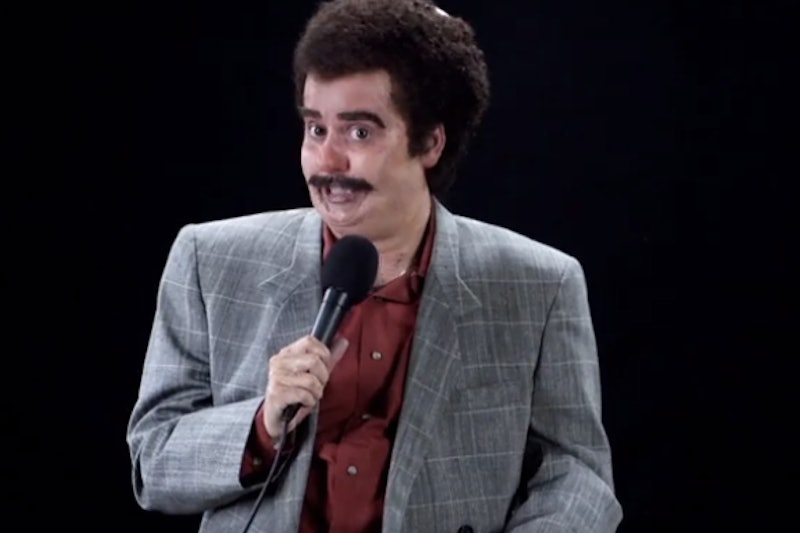 Well, Katy Perry said that the upcoming music video for her new single “Birthday” was going to be her “most insane” yet, and judging by the trailer the pop star dropped on Monday night, she wasn’t kidding. In the new preview for Perry's “Birthday” music video, she flexes her acting muscles as she embodies a series of the “World’s Worst Birthday Party Entertainers” (with the help of a lot of makeup, wigs, and occasionally some latex). The skit is mostly amusing, but there's one huge problem.

I'd be more excited about the “Birthday” music video if the trailer didn’t feature the offensive Yosef Shulem character. In addition to putting on a fake mustache, a Yamaka, and an exaggerated New York accent, Perry also uses the antiquated stereotype that Jews are obsessed with money, all in an effort to make people laugh. Perry’s been slammed for cultural appropriation in the past, so you’d think she would err on the side of caution from now on, but apparently, that isn’t the case. I don’t get it. How many people had a hand in making this trailer, and still, no one stood up and said, “Hey, Katy, I think some of those jokes you’re making here are insensitive”? The mind reels. It’s a major misstep in an otherwise funny clip — I just hope that the full music video doesn’t make matters even worse. We’ll see.

In the back of my mind, I was kind hoping that the “Birthday” music video would see the triumphant return of Perry’s Kathy Beth Terry character from the “Last Friday Night” video, but I knew that was a long shot. Instead, I was pretty sure that the video was just going to be another fun, colorful outing for Perry that would feature her prancing around a lavish birthday party in a variety of revealing outfits. Of course, there would be dancing, balloons, and hot models everywhere. To be honest, that kind of predictable video would've been preferable to Perry's offensive Shulem character.

Rumor has it the “Birthday” music video will feature hidden camera footage from real birthday parties in addition to Perry’s crazy cast of characters. I’m cautiously looking forward to seeing it.

The “Birthday” music video will be released on Thursday, April 24.