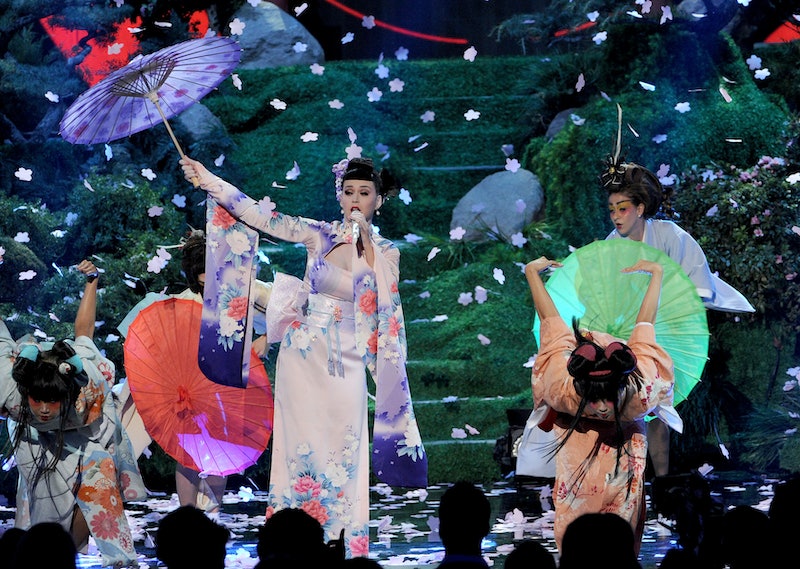 The watered-down headlines following Katy Perry's offensive performance at the American Music Awards Sunday night, in which she dressed up as a geisha in a kimono on a "Japan-inspired" (see: appropriating) set, complete with cherry blossoms, oversized fans, and the Great Wave, you know, to really drive home that Japanese feel, were an embarrassment. From "Katy Perry's AMAs Performance Of 'Unconditionally' Sparks Controversy" to "Katy Perry Accused of Racism After Dressing as a Geisha at the AMAs" to "Katy Perry Called a Racist for Sexy Geisha Performance" the headlines have been curiously focused on those who are calling Perry out for her rampant appropriation, rather than on Perry's RAMPANT appropriation. The issue shouldn't be that she's being called out, but rather what she did to deserve the backlash.

If you have to ask what exactly makes Perry's performance racist and derogatory, you should read Jeff Yang's impressively patient post over at the Wall Street Journal Blog, in which he carefully explains exactly how she is appropriating and exploiting gross, ingrained stereotypes of Japanese women as submissive and without agency:

The thing is, while a bucket of toner can strip the geisha makeup off of Perry’s face, nothing can remove the demeaning and harmful iconography of the lotus blossom from the West’s perception of Asian women — a stereotype that presents them as servile, passive, and as Perry would have it, “unconditional” worshippers of their men, willing to pay any price and weather any kind of abuse in order to keep him happy.

That's the problem with this year in pop star appropriation shitstorms: artists like Perry, and Lily Allen, and and Miley Cyrus, and Selena Gomez, can borrow elements of cultures they do not belong to, romanticize them, profit from them, and never suffer the racial discrimination of the minorities they are exploiting. They hide behind a thin guise of "honoring" other cultures, when they are only further deepening these sloppy portraits of long, complex cultural histories. Minority women are not props! How many times does that need to be said?

The coverage of Perry's geisha disaster is equally as tiresome — why the falsely high-brow queries on whether or not Perry's performance was culturally appropriating? Why the use of such negative language to describe Perry's supposed "accusers," as if she is the victim of a false allegations! Her racism should not be posed as a philosophical question — it's a concrete problem that is hurtful in a real-world context and it needs to be addressed as such.

That's why it's so frustrating that she isn't being held more accountable for her crass appropriation. As Dr. Ravi Chandra wrote about Perry at Psychology Today, "If you don’t think Katy Perry was racist — let me ask you, what if she had performed in blackface? Perhaps a costume isn’t the same as changing skin color to you."

There can't be echelons of racism, of what ethnic groups are acceptable to exploit and which are not. Even though her face was not literally painted yellow — yes, some commenters on a ColorLines Facebook thread said that because Perry "didn't make her eyes more slanted, talk in some gibberish Asian talk," her performance was an homage to Japanese culture.

The coverage of this hot mess is just more damage. The wrong conversation has come from Perry's racism, but it's a familiar one: not, how do we stop hurtful acts of appropriation like this from happening again? But rather, "Are people being too sensitive?" The narrative is skewed to victimize the perpetrator of discrimination.

Honestly, I think the most concise and accurate story about Perry's AMA performance is from ColorLines, which simply has a video of her disastrous performance with this caption underneath: "Remember when Katy Perry said she wanted to skin Japanese people and 'wear them like Versace?' Looks like she’s getting one step closer." Believe it or not, Perry said as much during an interview with Jimmy Kimmel.

More like this
Stormi Just Walked A Red Carpet With Mommy Kylie Jenner & Daddy Travis Scott
By Hugh McIntyre
Is Megan Fox Pregnant? MGK Gave A Shout-Out To Their “Unborn Child” Onstage
By Hugh McIntyre
Doja Cat Wore Surrealist-Inspired Schiaparelli To The BBMAs
By Dominique Norman
Harry Styles Called For "Backlash" In Powerful Statement On Abortion Rights
By El Hunt
Get Even More From Bustle — Sign Up For The Newsletter