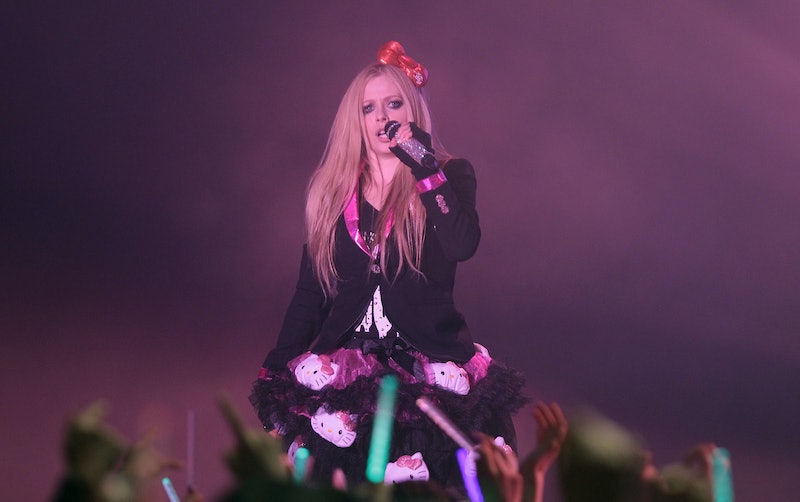 Oh god, Avril. What happened to "He was a sk8r boy, she said see you later boy?" Can we just go back to that? Lavigne released a music video for her new song "Hello Kitty," and boy, oh sk8r boy, does it take the cake for misappropriation of Japanese culture. Besides featuring a horrible half-shaved haircut, "Hello Kitty" runs rampant with racist under and overtones. Have you been hanging out with Katy Perry, Lavigne? In its entirety, it's pretty horrible, but here are the worst parts.

3. The depiction of Tokyo.

According to Lavigne, Japan is just a playground of candy stores, fast trains, and sushi restaurants (where she so deferentially bows to the chef, ugh). The whole video is candy-colored and bombarded with cupcakes, which Lavigne also wears on her skirt for some reason?

2. Her random use to Japanese language.

"Kawaii! Arigato!" Lavigne sporadically peppers her abysmal lyrics to "Hello Kitty" with a Japanese word or two, to show that she really appreciates the culture. She does this between lyrics like "let's play spin the bottle" and "You're so pretty, Kitty." I wonder if she had a language coach to teach her how to properly pronounce all three Japanese words that she now knows? Sure, it's super cute to use foreign words in music videos, but only when a white singer is doing it, so it's more accessible, but god forbid we hear a whole song in Japanese. That would just be too weird.

Didn't Gwen Stefani already offend us all enough already with her army of "Harajuku girls?" Lavigne employs a bunch of Japanese backup dancers that are all dressed EXACTLY the same, with the same red, banged haircuts to boot. They prance around blank-faced behind her, following her down the streets of "Japan" as she waves to her fans saying "Arigato." They are so transparently props to Lavigne in "Hello Kitty" ... when will white pop artists be finished using women of color as human set-pieces in their music videos? Anyone? Bueller?

Sorry, Avril, but "Hello Kitty" is a trainwreck, and not just because it's a horrible song (she actually drops the beat in this one; it's some hybrid pop-house music aberration). If you want to make horrible music, go right ahead, but don't embarrass yourself by setting your songs in a Disneyland, cotton-candy fantasy you have of a culture you don't understand. It's not "kawaii."

More like this
The Spice Girls Just Dropped A Brand New Music Video
By Sam Ramsden
Bella Hadid Will Think Of Her Spray-On Dress From Paris Fashion Week “Forever”
By Brad Witter
The Best 'Grey's Anatomy' Intern Moments, From MAGIC to Glasses
By Grace Wehniainen
A New Scooby-Doo Movie Confirmed Velma Is Gay & Twitter Is Pumped
By Radhika Menon
Get Even More From Bustle — Sign Up For The Newsletter