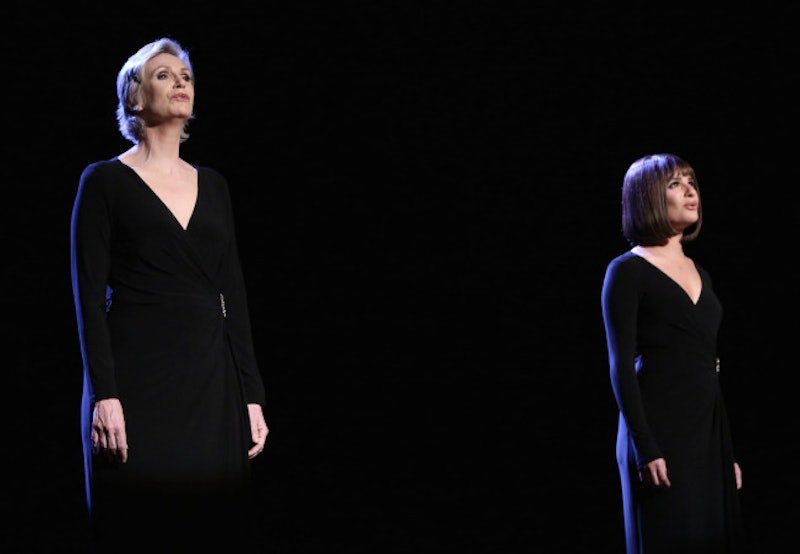 She finally did it! Rachel Berry came into her own on Tuesday night, and it was a truly magical Glee moment. After last week's unacceptable sex-talk episode, Glee returned with something huge — and no, we're not just talking about Naya Rivera's triumphant return. "Opening Night" featured the, well, opening night of Rachel's Funny Girl, and she killed it, all the way down to an emotional performance of "Who Are You Now?" And, after all this time, we were so proud of Glee's resident diva, especially when she told Sue Sylvester to shove it.

The end of Sue's reign of terror over the glee club kids was a long time coming. Mostly because they weren't subjected to her daily at McKinley, but also because they're all finally squashing the insecurity bugs she planted in all of them. I don't think we all realized how much damage she'd done until "Opening Night." I know, you're probably wondering how and why Sue was even in this episode at all, but here's how it happened: After an incredibly awkward duet with her and Will Schuester (yes, he was back too), they boarded a flight to NYC to see Rachel's opening night.

We all know Sue wasn't there for moral support right? From the moment she arrived, Sue told Rachel that she would choke and offered to go buy her some mustard to eat so she could make herself puke and "get that part over with." Whatever, Sue. Obviously, after reading Internet hater comments, Rachel was so beyond being affected by Sue's nasty, soul-crushing comments — so she went on with the show because, duh. Where she killed it and Sue stole her spotlight by walking out after the opening number. God, Sue, do you know anything about etiquette in society? No, because you DGAF about anyone but yourself.

Needless to say, Rachel KILLED IT — even after having a minor panic attack over whether or not she'd get a bad review from The New York Times. And then she celebrated with Kurt, Blaine, Mercedes, Sam, and Santana (YES, SANTANA IS BACK — PRAISE) in the West Village until the wee hours of the morning — only to return to Sue and a man in her apartment. Now, we were excited to see Sue drop down her guard and be a kind(ish) person for a change, but some things never change. She insulted more or less everyone and it was the last straw.

In a badass move that one can only pull off while hopped up on adrenaline from starring on Broadway — Rachel told Sue off and ended her. And I was left wondering why I'd chuckled so many times at Sue's jokes and insults and how I'd been so callous that I didn't consider her to be a villain all along. Sue Sylvester hurt these kids during a highly developmental stage in their lives and we didn't realize until Rachel was telling her that she was a terrible person. After her grand speech ended, everyone clapped, and it was almost as if Rachel had liberated them all from the terror of their high school past. And it was an amazing moment.

We've seen Glee take down bullies before in admirable ways — but no one ever quite got around to taking down Sue until now. But as great as it was, I couldn't help but feel a little sad for everyone that they'd spent so much time with that chip on their shoulder. Props to you, Rachel Berry — you're one badass Broadway star.