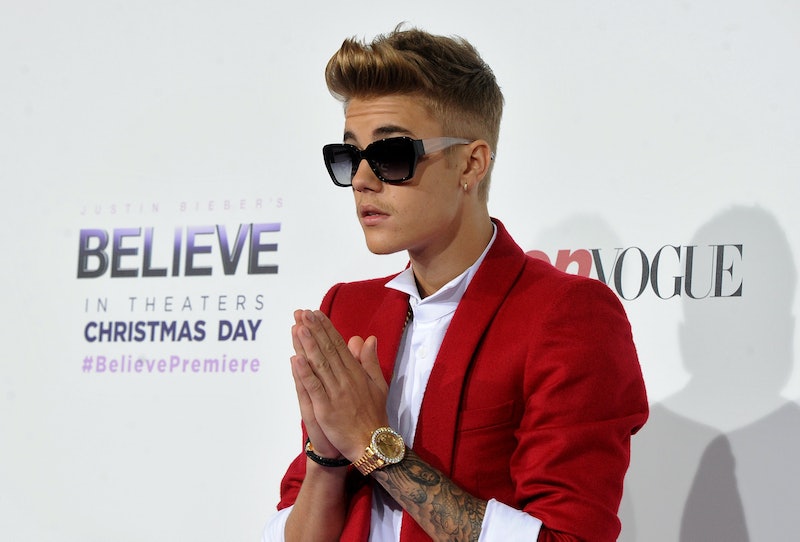 We've already been side-eyeing Justin Bieber for delaying his DUI trial to go to Japan with his mother, but apparently fast-acting karma caught up with him when he got there. But you have to hand it to Justin Bieber. Even he knows when he's gone too far. He's expressed a desire to turn over a new leaf after a year spent pulling antics that would not be out of place in a modern-day, realistic version of Game of Thrones (which would involve a lot less murder and a lot more throwing money at comparatively minor lawsuits), but delaying his trial was a step back from that direction. Then Bieber posted a picture of himself at a controversial Japanese war shrine and royally pissed off his Chinese fan base.

To be fair to Bieber, at least he didn't take model photos in and around the temple like Kim Kardashian did in Thailand. The Yasukuni Shrine is a Shinto shrine in Tokyo, Japan that commemorates individuals who died in the service of the Empire during the Meiji Restoration. This includes over 1,000 war criminals, which has sparked an international controversy that warranted its own Wikipedia page. Bieber didn't plug the name of the shrine into Google before tweeting, "Thank you for your blessings," along with a link to the Instagram picture.

As soon as Bieber realized the magnitude of this mistake, he deleted the tweet and the picture. That could have been the end of it, really. After all, this is the same boy who trashed a Wal-Mart and made no apologies for that. Thankfully, it appears that international controversy is too far over the line for Bieber, who posted a picture of the Time magazine coverage of his temple visit along with a genuine apology.

While in Japan I asked my driver to pull over for which I saw a beautiful shrine. I was mislead to think the Shrines were only a place of prayer. To anyone I have offended I am extremely sorry. I love you China and I love you Japan

Yes, Bieber really should have made the effort to do his research before he even went near his Twitter. The controversy aside, the Yasukuni shrine is still of great religious significance and there's no such thing as being over-informed about something like that when you're trying to be culturally sensitive. However, his apology was heartfelt, which isn't something we've come to expect out of Bieber these days. He's still got a long way to go before we can respect him again, but this is, oddly enough, kind of a start.

More like this
Hailey Bieber Went Pantsless In A Hoodie By Justin's Brand Drew House
By Dominique Norman
North West Will Make Her Acting Debut Alongside Mom Kim Kardashian
By Radhika Menon
Everything You Need To Know About Kanye's Post-Kardashian Dating Life
By Bustle Editors
Did Pete Davidson Remove His Kim Kardashian Tattoos? Photos Point To Yes
By Alyssa Lapid
Get Even More From Bustle — Sign Up For The Newsletter
From hair trends to relationship advice, our daily newsletter has everything you need to sound like a person who’s on TikTok, even if you aren’t.