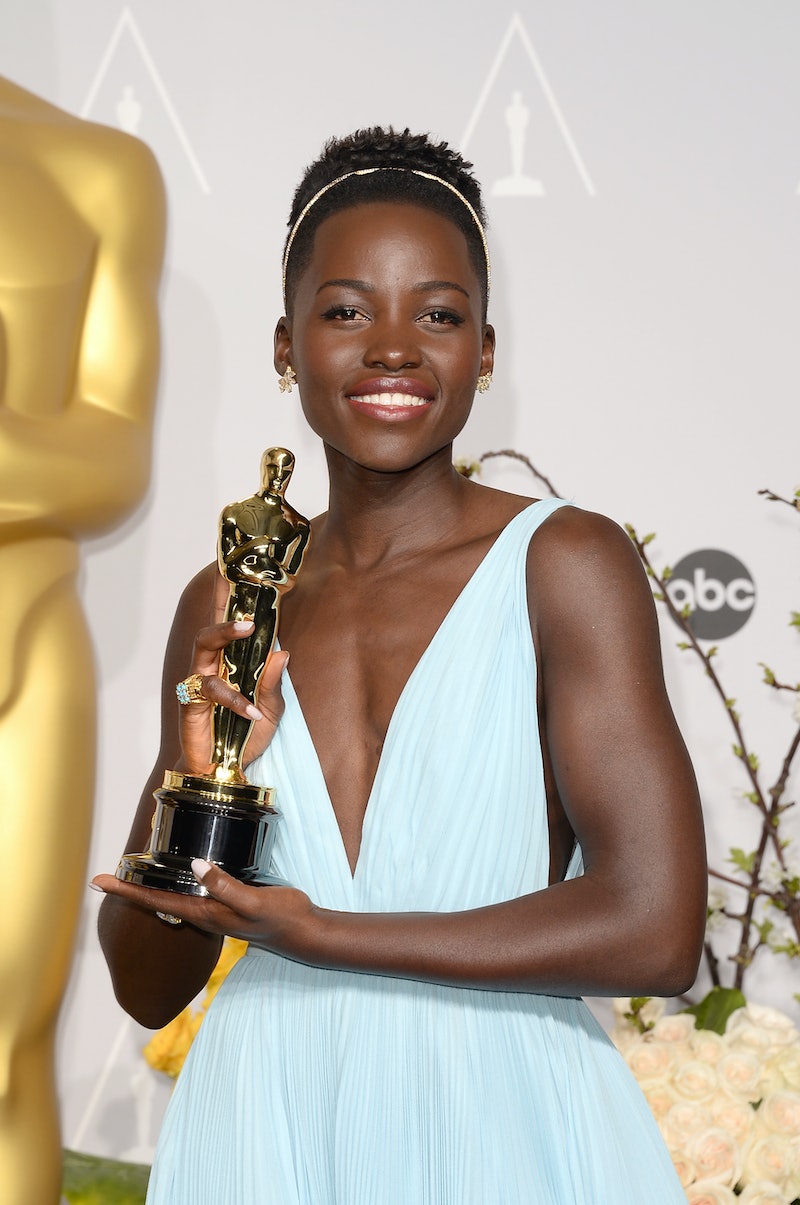 Lupita Nyong'o is Hollywood's It Girl. As she herself joked at the MTV Movie Awards, "A year ago, nobody knew my name. And now, nobody can pronounce my name." Nyong'o won an Oscar from her first ever feature film role in 12 Years a Slave, standing out among a cast that included Brad Pitt, Michael Fassbender, and Benedict Cumberbatch, and even maintained a great sense of humor among all the attempts to pit her against Jennifer Lawrence. Now Lupita Nyong'o is People 's World's Most Beautiful Person and almost better than the honor is the reason she earned it.

"She’s kind of all the rage," said People Editorial Director Jess Cagel on The Today Show Wednesday morning. "There was really no contest this year. She seemed like the only choice. Usually, there’s a lot of debate. This time, we were all in agreement."

Nyong'o was one of the leading choices for Most Beautiful, the only African American in the top three. (Jennifer Lawrence and Kate Middleton were the other two fan guesses while Keri Russell and Jenna Dewan-Tatum are the ones who actually made the People list.) She's been challenging the idea of traditional beauty with her flawless style and endless grace in her every appearance, moving everyone with her acceptance speech at the ESSENCE Black Women in Hollywood luncheon earlier this year. According to Cagel, that speech moved the staff of People as well and was the reason, in addition to her grace and humility, that she blew her competition out of the water.

“She spoke really frankly about… having felt unbeautiful when she was a girl and how she would pray for lighter skin and she spoke really openly about her journey to embracing the way that she looked and then ultimately realizing that physical beauty is not what sustains you.” said Cagel. “I just love her.”

Nyong'o is only the third black woman to be People's cover girl, following in the footsteps of Halle Berry and Beyoncé Knowles. To name an actress who admitted to feeling unbeautiful as the Most Beautiful Person in the World is a powerful statement. "It was exciting and just a major, major compliment," said Nyong'o in her interview with People. "...I was happy for all the girls who would see me... and feel a little more seen."

The world still has a long way to go when it comes to the conception of beauty, but Nyong'o's popularity is a step in the right direction. She is beautiful inside and out, a role model to many people, and completely deserving of the honor for more reasons than one.

More like this
Kate Had A Solution When Tom Cruise Broke This Royal Rule At The 'Top Gun' Premiere
By Frances Stewart
Sandra Bullock, Girlboss Extraordinaire
By Matt Harkins & Viviana Olen
'Stranger Things' Star Joe Keery Is Dating An "Indie Scream Queen"
By S. Atkinson and Grace Wehniainen
Laura Dern Said “Cultural Awareness” Made Her Rethink This 'Jurassic Park' Fact
By Grace Wehniainen
Get Even More From Bustle — Sign Up For The Newsletter