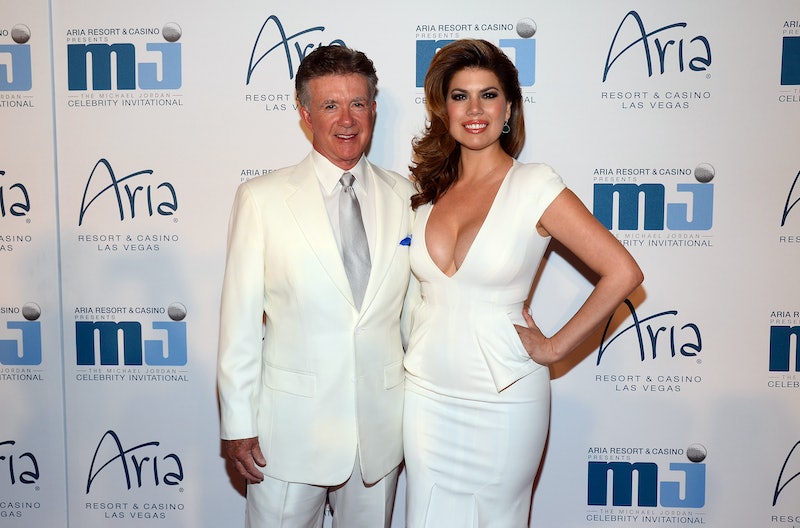 Alan Thicke is stepping back into the shoes of Dr. Seaver — well, kind of. Remember when Thicke announced his faux-reality TV show last month? Well, Unusually Thicke will premiere on Apr. 16 on TV Guide Network and the former Growing Pains star is out and about generating buzz because the day is almost here. Aside from the fact that at this point we've been trained to believe that all "reality TV" depicts faux-reality, Thicke's Unusually Thicke just sounds so odd that we might actually have to tune in to see how it works.

I know you're all wondering whether or not the "Blurred Lines" singer and estranged husband of Paula Patton will appear on his dad's new show. And your answer would be yes — but don't expect to see any of Robin Thicke's marital drama unfold in front of the cameras. Thicke, while promoting the told E!, "You'll see a couple of appearances, cameos by Robin checking up on me," but he's not about to exploit his elder son's relationship troubles. The doting dad is happy to exploit his son in other ways though — Thicke said, "He's clearly an important part of the family and good enough to participate a little bit." Hopefully Robin will be a little more supportive than Kris Jenner's kids were about her talk show.

Anyway, back to what's important here and why you'll want to watch Alan Thicke's little experiment into the reality TV land occupied by the Real Housewives and the Kardashians. We've rounded up 6 reasons why Unusually Thicke is so odd that you should check it out:

Unusually Thicke? Who approved that title and did Alan come up with that himself? I'm assuming this is a play on phrases like "thick and thieves," and "blood is thicker than water," but there's nothing unusual about a family being close. Unless he's calling his family unusual — but that really doesn't make much sense either. This is just an all-around bizarre title, so at least the Thickes have that going for them.

Thicke said of the upcoming series, "It's real people in real situations that are happening in our lives but we're layering it with a sort of sitcom format." Wait, if the situations are real, how can this be faux-reality? And how can real situations be easily placed into the sitcom format? C'mon, Alan, you're just pulling our legs now. As conflicting as this all sounds, we're honestly interested in seeing how this will work out — and whether or not it'll be exactly like watching an episode of Growing Pains.

Thicke's mother-in-law was accused of murder in Bolivia last year — who knew? Apparently her name's been cleared but she remains on house arrest with Thicke and his wife Tanya. So how is that going to factor into the sitcom format? It won't — at least, according to Thicke it won't. He told E!, "We didn't deal with it on the show in a way we could get laughs, but hopefully we show how you distract and compartmentalize and deal with these things," because it just couldn't be ignored. Nothing like a little murder accusation to get people interested in your family.

Alan Thicke spent a lot of time playing a psychiatrist. Now, we know that Robin Thicke and Paula Patton's marital issues won't be a part of the show. But with Thicke checking in on his father from time to time, won't Alan want to check in on his son as well — and in true Dr. Seaver fashion offer up advice on what he should do? Personally I'd love to hear his suggestions on how Robin should get Paula back — considering he's on his third marriage — because Robin could obviously use some help.

Will Robin sing it? Even better — will it be a cover of the Growing Pains theme song "As Long as We've Got Each Other" by Robin Thicke? It's obvious that Alan is a fan of his time on the popular 80's sitcom, so would he really go for the gusto and pay homage to it so openly — we hope so.

Alan's 16-year-old son with current wife Tanya will star alongside his parents on the show. Since Unusually Thicke is scripted and formatted, we're assuming everyone will be in some type of character. So will Carter be more of a Mike, a Ben, or a Luke?