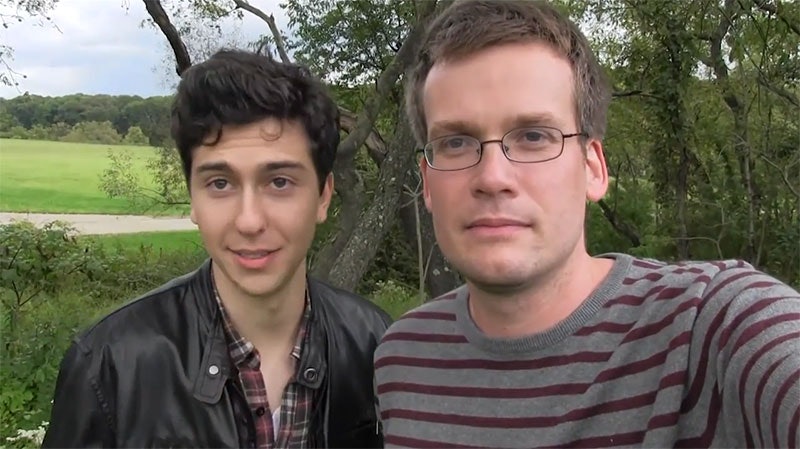 the release date for The Fault in Our Stars could not come sooner. We've only had one trailer released thus far, one featurette, one clip, and a whole lot of waiting. We waited and waited and waited to see the first glimpse of Hazel and Gus in the flesh, and our waiting paid off, because the trailer is phenomenal. With the second trailer debuting in theatres this Friday, we wonder if the spot will feature more of the film's secondary lead, that is, the hysterical Isacc, played by Nat Wolff. The actor is set to star in John Green's second book-to-screen adaptation, Paper Towns, and has formed a close bond with the author, as documented on social media and Green's YouTube channel, vlogbrothers. Some might even call it a bromance. I hereby dub their shipping name be "Johnat." So let's take a closer look at this powerhouse "couple's" undeniable chemistry, if for no other reason than to keep us entertained as we inch closer to June 6.

1. They Have Playful Banter

"I'm excited to see all the scenes [in The Fault in Our Stars] that don't have Isaac in them," Green retorts when answering the fan question: "What scenes are you most excited to see?" in this charming video they did together on set of FIOS.

2. They Feed One Another (Emotionally & Literally)

The film takes place in Orlando, and follows a young man (Quentin, played by Wolff) who with his neighbor Margo finds a man who committed suicide. Their shared, traumatic experience acts as the catalyst for their budding relationship. We can only hope that more vlogs of the Green/Wolff bromance emerge on set.

4. They Defend One Another

"For all the tweets about me not being blonde... I'm sorry," Nat Wolff says about his character, who is blonde in the book.

"It's not his fault, he was born that way!" Green adds of Wolff's black hair.

5. They Appreciate One Another's Sensitivities

"Have you seen me cry at all?" Green asks Wolff.

6. They Finish One Another's Sentences

Green said, "I want to work with Nat for the rest of my career, but not on movies..."

"...just like on little projects, we could build a house together," Wolff concludes.

7. They Can't Keep Their Hand off One Another

Green and Wolff both have the same favorite book, Catcher in the Rye, and when they find this out, they embrace one another. "That must be why we're so close," Green says, mid-embrace.

8. They Take Adorable Instagrams Together

And this one, where they are trying to supress Shailene Woodley's abundance of enthusiasm.