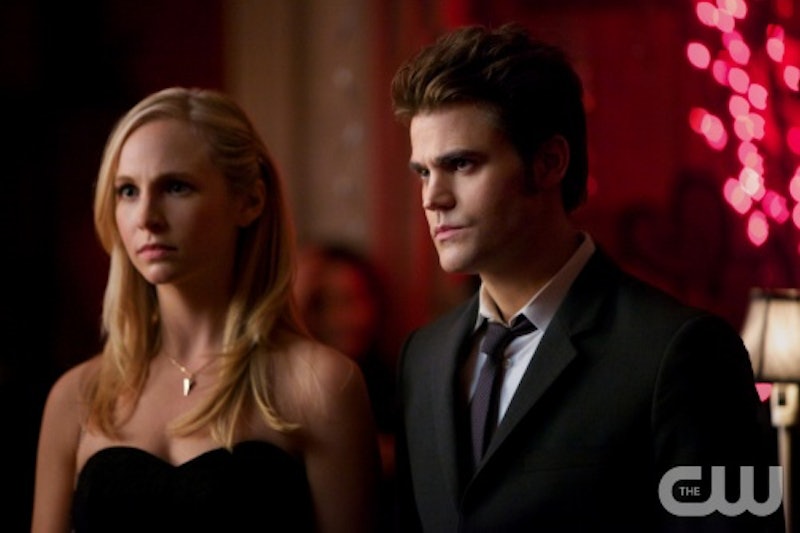 For obvious reasons, I am severely opposed to one particular Vampire Diaries pairing. Mostly because, no matter how great of friends Elena's best friend and ex-boyfriend are or how much chemistry they seem to have, The Vampire Diaries ' Caroline and Stefan getting together is a terrible idea. Don't get me wrong. I love Caroline and Stefan as individuals (even though sometimes they can be a little too melodramatic) and I want them to be happy — I just get the feeling that throwing them together would be a little too much of a cop out. And even though we hate it by now, that Stefan-Elena-Damon love triangle is Never. Going. Away. So let's stop looking for the easy way out, shall we?

Caroline and Stefan have slowly developed what is by far the greatest and most functional and supportive friendship on The Vampire Diaries since Season 2. And regardless of how many fans have been 'shipping the couple since day one of the series, show creator Julie Plec isn't making it sound like their sexual tension is going anywhere anytime soon or at all. Plec told E!:

I don't want to speculate about where they end up, but I do think what has happened is a very strong friendship has developed between them, that's been really special, and will continue to grow even more special. As for what each of them feels for the other, who knows? Right now, we're in the friend zone.

Did you hear that, everyone? FRIEND ZONE. I know you're probably shocked, considering The CW is known for playing relationship musical chairs on all of its series (remember when everyone on Gossip Girl and One Tree Hill dated everyone?). Even Paul Wesley, who plays the ever-brooding Stefan Salvatore is shocked at this point that the pair haven't gotten together. The actor told E! that he thought the writers "would've done it by now. I really did. But it just doesn't seem to be coming into fruition." And that he's really not worried about Elena's reaction because she really hasn't noticed anything romantic about their relationship yet.

So on that note, I've got a handful of great reasons why we don't need Steroline to happen anytime soon — the biggest of which being a certain hybrid that just got his own show (winks).

Like Plec said, their current relationship is something truly special. They became friends and have since become the biggest — and sometimes only — support system for one another. And, like I said earlier, their friendship is the only one on the show that is even remotely admirable and functional. Not only does the show need them to prove that it's possible to be a vampire and/or werewolf and not ruin all of your relationships by being judgmental, snapping the other person's neck, or sleeping with them. Getting romantically involved would just ruin Stefan and Caroline's dynamic and that would be a huge shame.

If there's anyone that's going to stick to the girl code, it's Caroline. She's all about her girlfriends, being a good friend, and offering up her semi-judgmental two cents wherever she deems necessary. Caroline's not about to start dating Elena's "first and one true love" because she'd never want to deal with that guilt. We're not saying that girl code is the be all end all of female relationships, but I definitely believe Caroline sees it as a firm line she'd never cross.

Their Insecurities Will Destroy Them

If you're ignoring the fact that Caroline and Stefan are two of The Vampire Diaries' most insecure characters, than we clearly haven't been watching the same show. Stefan feels insecure about just about everything — beginning with Katherine two-timing him with his brother and Elena ditching him to be with Damon and ending with his Ripper "condition." Insecurity might as well be Stefan's middle name. And as for Caroline? All she's done is jump from relationship to relationship throughout the entire series — I don't want to be hard on her, but she's not entirely secure herself. Between the two of them, attempting to make the other feel secure would be a full time job within their relationship and that's just exhausting.

Caroline's got a heart of gold, I'll give her that. But she also knows how to say "fuck this" and walk away when she's fed up with someone's bullshit — which is a great quality that's worth admiring, so I'm not faulting her on that. But when it comes to Stefan, when he flies off the deep end, he needs someone that won't get fed up with his martyrdom and Caroline's got no patience for that weak shit. At least, not anymore. We'd like to believe that Stefan's Ripper days are behind him for good, but if they're not, they'll definitely drive Caroline to a breaking point where she'll wash her hands of this particular Salvatore mess.