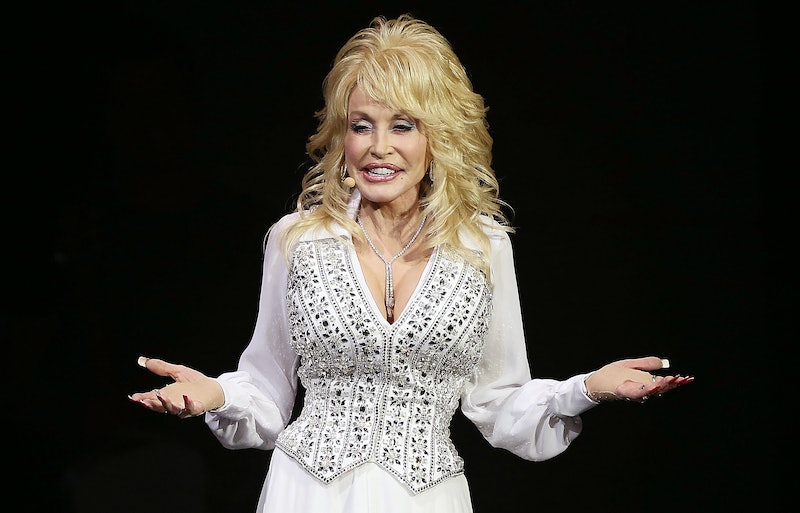 Godmother knows best, Miley. Miley Cyrus is one of Time 's "100 Most Influential People" and there was no one better to write her intro than her good old onscreen and offscreen godmother, Dolly Parton. After a whirlwind of questionable behavior that started with the 2013 MTV Music Awards and included lots of twerking, smoking pot, and the Bangerz tour, Cyrus was hospitalized for an allergic reaction and forced to cancel a leg of her controversial tour. Hopefully, her bed rest will lead to some self-reflection and perhaps a reading of the intro Parton obviously took time to write — because it might just be what saves Cyrus's career from being consumed by controversy.

For those of you that don't know — yes, Dolly Parton is Miley Cyrus godmother, that wasn't just something made up for Hannah Montana. And clearly, Time made a great choice when they decided to enlist the veteran performer, Parton, to say a few words about her goddaughter. Because Parton took the opportunity to sing Cyrus' praises (ha), but at the same time, she snuck in some seriously good advice that we hope the "We Can't Stop" singer is reading right now.

“Wrecking Ball” is a great song. The whole album is great. So I’m hoping that now she can relax and show people how talented she really is. ’Cause the girl can write. The girl can sing. The girl is smart. And she doesn’t have to be so drastic. But I will respect her choices. I did it my way, so why can’t she do it her way?

And we completely agree. Parton says earlier in the intro that Cyrus needed to break out of her Hannah Montana box and that she succeeded by making a drastic change. But now that she's made her point, marked her territory, and established her own power, it's time to lay that persona to rest. Which is really what we've all been saying all along, but maybe Dolly Parton is the only person capable of convincing Cyrus to slow the eff down.

Miley Cyrus is talented and dare I say it, her songs aren't actually bad. (I catch myself singing "Wrecking Ball" on occasion.) But at this point, The Crazy Miley Show is overshadowing everything that it's supposed to be promoting — Cyrus as a talented artist. And Parton's realized it too — probably because when she guest-starred on Hannah Montana she was brought on to resolve a similar situation. Seriously.

In the episode "Good Golly, Miss Dolly" Hannah's dad asks Parton to talk some sense into the young star, whose crush on a boy is interfering with her work.

Okay, Cyrus's current situation isn't exactly the same, but her obsession with being out there and unique is interfering with her talent or rather, our appreciation of her talent. But just like she was thankful for Aunt Dolly talking some sense into her then, if she actually reads this Time piece, she'll be thanking her when she doesn't end up drowning her own career in alienating controversy.

Who knows, maybe Dolly and Miley can even sing a duet about it one day.