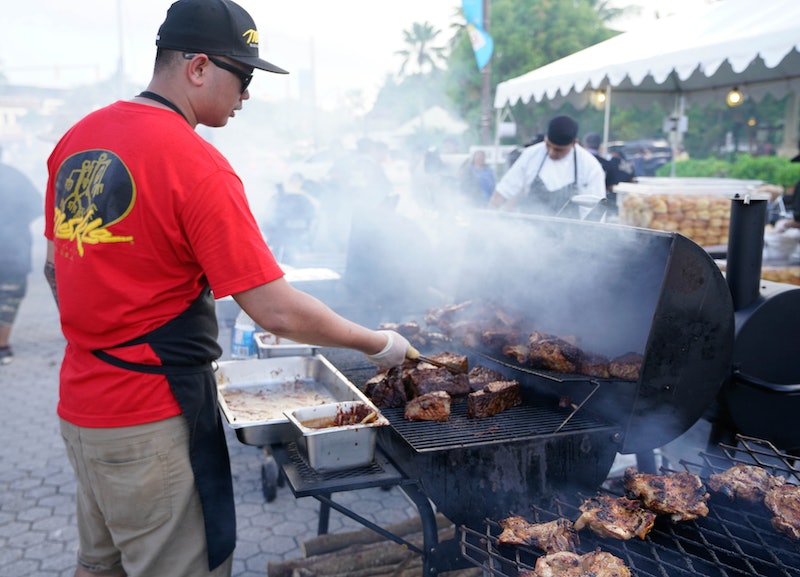 Sweet sauce, black sauce, white sauce; ribs, pulled pork, sausages, mutton. If there’s anything more multifarious than the variety of barbecue one can eat, it’s the number of places in the United States claiming to be the BBQ capital of the world. Indeed, perhaps more than any cuisine, barbecue is passionately debated point of pride for many regions of the country. It's National Barbecue Month, and if you foresee some summertime finger lickin’ in your near future this Memorial Day weekend, you'd best know which locations to hit up.

Kansas City, known for its signature sauce, will appeal to those who take the phrase “finger-lickin’” literally, while the diehard barbecue artists in Lockhart, Texas subscribe to a “no sauce” rule, emphasizing well-seasoned and well-cooked meat above all else.

In lieu of a ranked list of the best BBQ cities in the country (which is just about the most Sisyphean task you can imagine), this list encompasses the 10 best cities in America for BBQ, while reflecting the geographical and cultural diversity of barbecue cuisine. From a small Alabama town specializing in “white sauce” BBQ, to giants such as Dallas and Memphis, these cities offer award-winning, crowd-drawing styles of barbecue that you are unlikely to find anywhere else.

The only two words with a better ring than “Texas BBQ” are “Dallas BBQ.” Dallas and other cities in the East Texas region are known for their rough meat cuts and sweet-tangy sauces. In addition to standards such as BBQ pulled pork sandwiches and ribs, the Dallas area also sports hotlinks and liverwurst, making it an ideal spot for sausage fans.

Where to get it: Angelo’s Bar-B-Que, where a long history (the restaurant has been open for 55 years) and a down-home Texas feel (a mounted animal head for every table) combine to create BBQ perfection.

With more than 100 BBQ joints serving its metro area, Kansas City claims to be the "Barbecue Capital of the World." And while the title has its challengers, there’s no doubting that “Kansas City-style Barbecue” — a technique from the early 20th century that involves slow-cooking meat and the slathering it with a tomato- and molasses-based sauce — remains one of the most distinct and delicious types of BBQ in the country.

Where to get it: Gates Bar-B-Q, which has six locations throughout the Midwest and is famous nation-wide for its sauces. If you don’t get a chance to go to KC yourself, look out for Gates sauce in your local grocery store.

With at least eight barbecue restaurants serving its small population of 19,000, Lexington has a high per-capita BBQ ranking, and claims to be the “Barbecue Capital of North Carolina” (NC itself being mainstay on the BBQ scene). The small city, which U.S. News & World Report ranked the fourth best BBQ locale in the U.S., draws on traditional Southern roots to create a wide variety of finger lickin’ fare. And its famous barbecue festival (which will take place this year on Saturday, October 24) draws tens of thousands annually.

Where to get it: Lexington Barbecue, referred to locally as “Honeymonk,” whose wood-cooked BBQ dishes have turned this 52-year-old small restaurant into a national destination.

Food and Wine named Columbia and the surrounding region one of the top BBQ spots in the country, citing its unique mustard-based flavor profile (this stretch of South Carolina is often referred to as the “Mustard Belt”). Another plus: the dining style of choice here is all-you-can-eat buffet.

Where to get it: Shealy’s Bar-B-Q in nearby Batesburg, which “offers an enormous buffet with smoked pork, fried chicken, and side dishes galore.”

U.S. News & World Report ranked Memphis the best BBQ city in the country, citing both the sheer proliferation of “barbeque-plating restaurants” — around 80 — and the renowned slow-cooked pork and dry rubs.

Where to get it: If you’ve had your fill of BBQ staples, head to Cozy Corner, which applies to the barbecue technique to Cornish hens.

Western Kentucky-style mutton barbecue — a type of BBQ made from sheep that’s at least one year old —finds its apotheosis in Owensboro, where the notoriously tough meat is often tenderized and served as a stew or with a “black” dipping sauce.

Where to get it: Moonlite Bar-B-Que Inn, a large buffet-style restaurant that serves a variety of mutton dishes.

Though Chicago boasts a killer barbecue scene, the smaller city of Murphysboro, Illinois offers a homier setting and a more unique flavor profile. Situated in southern Illinois, Murphysboro draws inspiration from both nearby Missouri, with its famous Kansas City-style BBQ, as well as Tennessee, with its more classic sauces and dry rubs.

Where to get it: 17th Street Bar & Grill, a self-proclaimed “Barbecue Shrine” which has thrice won the famous Memphis in May barbecue competition.

Austin has as big a reputation for BBQ as Dallas, but true barbecue diehards should consider heading 30 miles south to Lockhart, which the venerable Texas Monthly named one of the top BBQ spots in the state, and U.S. News & World Report named the second-best in the country. The city, which calls itself the “Barbecue Capital of Texas,” estimates that some 250,000 visitors and locals eat BBQ in Lockhart every year.

Where to get it: Kreuz Market. According to Texas Monthly , “[f]or the most succulent, perfectly-seasoned beef, you can do no better.”

Adventurous BBQ lovers should head to Decatur, Alabama, where, in addition to every other barbecue staple, you’ll find “white sauce” — a unique mixture of mayo and vinegar used to coat the meat.

Where to get it: Food and Wine, which named Decatur one of the best BBQ spots in the country, suggests Big Bob Gibson’s, whose pitmaster Chris Lilly claims to have invented white sauce.

Think you can only get great BBQ in the south or Midwest? Think again. Never content to let any cuisine go unmastered, New York has stepped out as a contender on the national BBQ scene, with its own burgeoning “New York-style” barbecue. In addition to classic joints like the famous Syracuse-originated Dinosaur Bar-B-Que, the city also sports local favorites such as Hill Country Barbecue in Chelsea and Fette Sau in Williamsburg.

Where to get it: Other options include Fatty ’Cue, BrisketTown, and Pork Slope.

More like this
Are We Drinking Rosé All Wrong?
By Sheila Yasmin Marikar
Meet The Spice Company Founder Who Sees Chai As A Metaphor
By Madhuri Sathish-Van Atta
If Your Refrigerator Is A Mess, These 25 Organizing Products Can Help
By Courtney Young
Here’s What Sarah Jessica Parker’s Canned Cosmo *Actually* Tastes Like
By Emma Garza
Get Even More From Bustle — Sign Up For The Newsletter