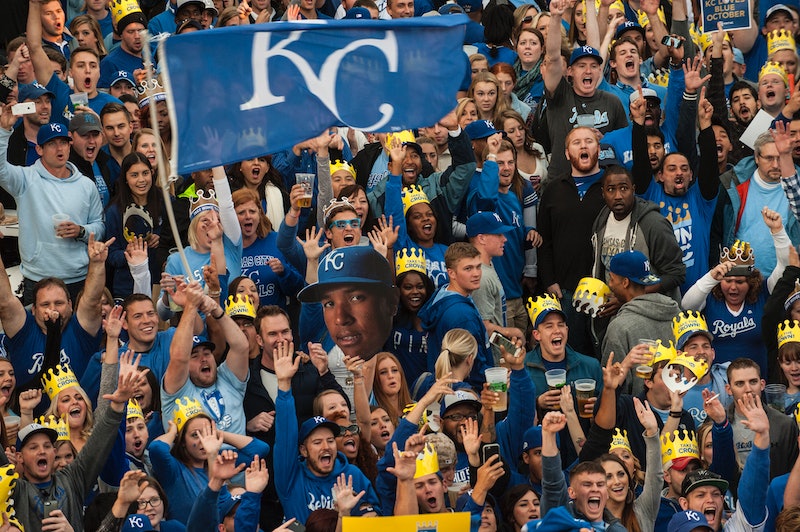 First things first: The Kansas City proper we're talking about here isn't in Kansas — it's in Missouri. (Glad we got that straight.) Local pride runs strong here — especially with Jason Sudeiki s and Paul Rudd's Overland Park ties (and, yes, suburban Overland Park is in Kansas, but it's also under the umbrella of Kansas City, even though Kansas City is Missouri. You'll understand if you're from here). The Midwest birthplace of jazz, barbecue, and Ernest Hemingway's career (thanks, Kansas City Star!), KC is home today to a ton of burgeoning tech start-ups, a vibrant arts scene, Baldwin denim, the Nelson-Atkins Museum of Art, and some of the most down-to-earth, friendliest people you'll ever meet.

If you live here, there are some things only you can truly understand. You know you're from Kansas City if...

A lot of cities like to pretend that they do barbecue best. But nothing comes close to Fiorella's Jack Stack, Oklahoma Joe's (a misnomer if there ever were one), BB's Lawnside, or Arthur Bryant's. And each resident has their BBQ of choice: Give a Jack Stack fan a plate of Arthur Bryant's? Oh, they'll know.

You're still waiting for public transit

The Jo? Do people ride it? Where are they? But hey, we're getting a $515-million streetcar system downtown. It's retro.

Once upon a time in 1863, a pro-slavery vigilante group from Missouri torched the abolitionist town of Lawrence, Kan., and proceeded to massacre a fair bit of its citizenry (um, really.) The grudge distilled into a general hatred reenacted to this day with football, with games between the University of Missouri and KU referred to as the "Border War." Too bad Mizzou left the shared conference for the SEC for the 2012-2013 season. Ask anyone, though: The rivalry still simmers (even though Mizzou is obviously the best).

Every year, the Royals are either horrible, promising, or disappointing, but every year, we think they have a shot. Our most beloved (sadly retired) player, George Brett, even inspired Lorde's "Royals" hit, so that's a home-run in our book.

You Know JoCo is where color goes to die

Johnson County, aka "JoCo", contains (among others) the predominantly white, upper-middle-class suburbs of Leawood and Overland Park. They're generally known as the "bubble," because the worst thing that happens there is a bad round of golf. Beige reigns supreme over the townscape, where shades of tan and latte coming together to create a set of hues collectively described as "Johnson County taupe." Retreat, retreat!

You got to feed the goats. Also, gophers! There were other animals, too. Allegedly.

Your first trip abroad was at Worlds of Fun...

Want to ride on the Viking Voyager, then hop across to Africa and ride the Mamba before heading over to the 'Orient' section for the Spinning Dragons coaster? Outdated national stereotypes aside, a day in the park was never long enough.

...unless it was to Seville.

KC is twinned with the sweetly sleepy sister city of Seville, Spain, and our upper-crust shopping district, the Country Club Plaza, is modeled after the Iberian city's architecture. With al fresco cafés, and a large proportion of the fountains KC is famous for (just a few fewer than there are in Rome, legend has it), you can almost almost pretend you're there.

You know Town Topic tater tots are everything

Plates of crispy golden potato heaven since 1937. Is there more to life?

You Think Sporting KC is basically the next Man U. Just wait.

As it turns out, Sporting KC is actually doing pretty well! You'll not see a bigger soccer fan base outside of Europe than here.

Boulevard will always have a place in our hearts (and glasses).

Where there's barbecue, there's bound to be beer, and KC certainly holds its own. Its much-beloved hometown brewery, Boulevard, finally up and sold itself to Duvel last year — but that won't stop residents from taking their engagement photos outside the building. For more indie hops, residents are now looking to the likes of Cinder Block and Kansas City Bier Company.