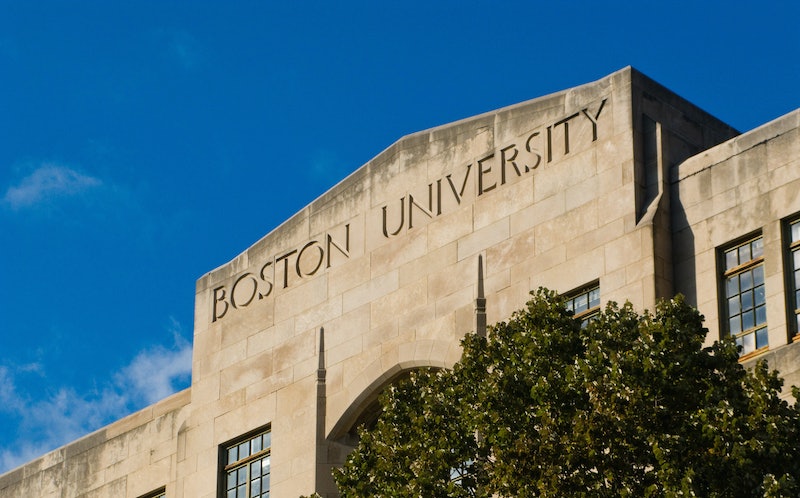 Boston is the ultimate college town: There are over 50 colleges and universities in the metro area, and one in five people you meet on the street will be a student. But, even among elite schools like Harvard and MIT, Boston University stands out. Smack in the heart of the city, BU is steps away from Fenway Park, a mere T trip from historical Faneuil Hall, and a cab ride from all the college bars your heart could desire. It's like a playground for college kids...at the low tuition price of $50,000+ a year.

The guy/girl ratio may be a disappointing 70 to 30 percent, but we have Marathon Monday, Ivy League dating options, and a reputation for churning out some of the most employable grads (take that, Harvard). If you're at BU now, or graduated from this fine institution, you know what I'm talking about. There are a some things only we can truly understand.

Marathon Monday = the best holiday of the year

you know that grade deflation makes BU tougher than Harvard: it's a scientific fact

You've used this line on an MIT dude

and this line on a BC dude

and this line on a Harvard dude

You can go days without leaving the Comm. Ave. bubble

Who says we don't have a campus?

And you can always spot the Comm. Ave. Runner

Where is he going?!

Tuesday's are for T's Pub

We do. And there's always karaoke.

But you spent your pre-legal years in The Dugout and Daisy's, fake ID or not.

But you'll always have a soft spot for it, even after you can legally go to bars

Even the bars don't close that early! Although, 2 a.m. is still early.

You know you can pay for drunken Domino's with your dining hall points. Score!

You've hooked up with someone who's only "BU cute"

When the student population is only approximately 30 percent male, one mustn't be choosey.

You will never have a one-night stand in a dorm, thanks to the antiquated opposite-sex guest pass system

But at least Student Health gives condoms away for free

This song will forever be stuck in your head

Brace yourself, the endless blasting of "I'm Shipping Up To Boston" is near.

Despite your proximity to Fenway, you will never get a discount on Red Sox tickets

Whenever someone talks about their college football team, you're like:

We've got the Red Sox, the Celtics, the Bruins, and the Patriots in our backyard.

You'll never, ever have trouble remembering a password after using Kerberos

It's in a castle!

plus, you will never get an A in any class

This is the general weather forecast, even in April

You have an irrational hatred of Boston College

and you're not the only one

And whenever someone from BC says they go to school in Boston, you're like:

It's in Chestnut Hill, idiot.

You will never walk across the seal, because you can't afford to graduate late

when you graduate, you know that this is how you will feel no matter where you live

And most of all, you know this is how you'll always feel about BU

Until you start paying those student loans, that is