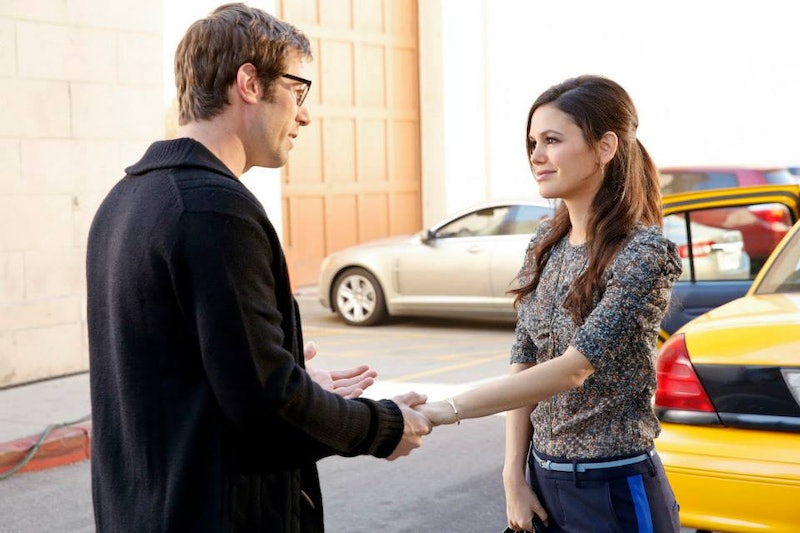 None of us Hart of Dixie fans really knew what to make of Joel Stevens when he followed Zoe Hart back to Bluebell at the beginning of Season 3. And now that Hart of Dixie's Joel and Zoe have broken up so that he could become a big time Hollywood screenwriter and shoot movies in London, we're all realizing that she's so much better off without him. Sure, Joel grew on us after awhile — but his exaggerated representation of the "typical New Yorker" got kind of old and boring fast. Way too boring for the sparkly and wonderful Rachel Bilson and Zoe Hart, that's for sure.

Choosing the right guy hasn't necessarily been Zoe's strong suit since arriving in Bluebell. I know, that's owed in part to the emotional unavailability she suffers from that landed her in the small town in the first place. But looking back, Zoe went from engaged man George to immature bartender Wade to kind of stuffy and incredibly boring Joel. Sure, Joel won Bluebell's Man of the Year award, but that's only because his book got optioned by Warner Bros. Whatever, dude.

So what was wrong with Joel? There were no huge red flags — but he just didn't fit in and he really didn't mesh so well with Zoe. And, the obvious, Lavon didn't really like him that much. Mayor Lavon Hayes, Zoe's first friend in Bluebell and former landlord, knows a thing or two about character. (He was dating AnnaBeth and she's the greatest character on the show.) Zoe was heartbroken for a minute when they broke up because long-distance was too much for them, but it looks like she's already realized that she's so much better off without Joel.

He Was Kind Of Boring

I mean, he was. Joel made a conscious effort to assimilate into Bluebell and he made friends and got into hijinks of his own. But their relationship was really boring — mostly because of Joel. I don't want to sound harsh, but he spent the first few weeks in Bluebell complaining about the heat and the lack of noise and all of those "New York things" that New Yorkers are supposed to complain about. When, in reality, he was boring — he didn't really challenge Zoe at all like George and Wade had except for dulling her down into being less interesting. And this relationship kind of turned Zoe, who was all about her career, into someone that was obsessed with restoring old houses and picking out paint swatches. Bo-ring.

He Was Her Rebound

It's the truth. When I first found out that Zoe was getting a new love interest I was all like, "Really? Why?" Because the way this story is supposed to end is obvious — with Zoe and Wade back together. Joel was Zoe's New York rebound to breaking up with Wade and that's probably all he would've been, if he didn't follow her down to Bluebell when she decided to make her grand return. He then became her still-around rebound and we all had to patiently wait for him to find a proper exit strategy. Because Zade forever.

Zoe was an emotional mess over George being engaged to Lemon. Because she was head-over-heels for him — so head-over-heels that she jumped into bed with Wade when she thought George had actually gone through with his wedding. I mean, they even ran off to New Orleans together. And with Wade, Zoe threw herself fully into their relationship as well because she actually liked Wade a lot. She never had that with Joel — unless that part of their relationship happened in New York and by the time they reunited in Bluebell they'd been past the "I can't stop talking about this, can't stop thinking about this" love. It felt a lot more like Zoe was trying to convince herself more than everyone else that she really loved Joel.

The Chemistry Wasn't There

Duh. Was there ever a moment — except for when she tried to be a sexy Emily Bronte — that Zoe and Joel seemed like they had the chemistry she had with Wade? Those two couldn't keep their hands off of each other up until their actual last moments. Zoe never would've lasted with Joel having known what it's like to have true chemistry with your partner.

More like this
Paapa Essiedu Likes To Keep His Relationship Pretty Private
By Maxine Harrison
John Mulaney & Olivia Munn's Relationship Timeline Features The Comedian's First Father's Day
By Jordyn Tilchen
Julie Andrews Revealed A Surprising Behind-The-Scenes 'Bridgerton' Detail
By Grace Wehniainen
Who Is 'Umbrella Academy' Star Elliot Page Dating After His Divorce?
By Jake Viswanath
Get Even More From Bustle — Sign Up For The Newsletter