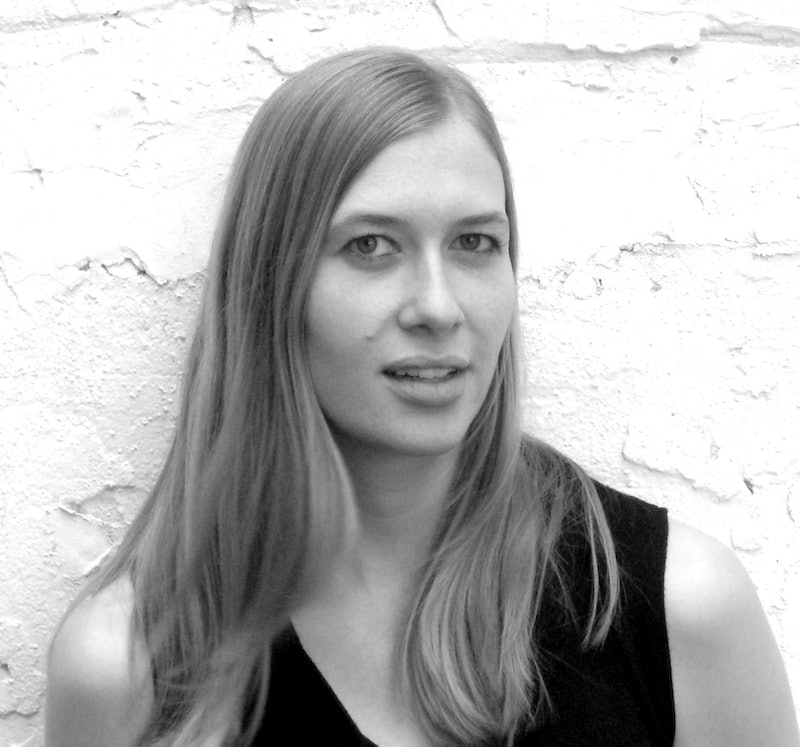 In The Violet Hour (Scribner), Katherine Hill spans coasts and time periods to paint a portrait of a family coming together and falling apart. Skipping the 'happily every after,' Hill begins with the uncovering of an affair, the dissolving of a marriage, and a plunge off a boat into the middle of the ocean... in chapter one. The hippie vibe of San Francisco in the '70s and modern suburban Maryland both prove engrossing settings for three generations to experience love, betrayal, and possible forgiveness. Hill told Bustle about the inspiration behind The Violet Hour, and the thrill of publishing her debut novel.

BUSTLE: The Violet Hour opens with the end of the marriage of Cassandra and Abe and journeys back in time to the beginning and unraveling of their relationship. Why did you choose to open with this particular moment?

KATHERINE HILL: I liked the idea of introducing characters at an utterly extreme moment, when, in their feelings and actions, they are both not themselves, and at the same time the most themselves. I saw it as a test for all of us. Here are Cassandra and Abe, who have this apocalyptic fight on a boat — but then what? How do you recover the irrevocable? The Violet Hour is their exploration of that question as well as mine.

The novel is a deep study of family relationships. Did any other works of literary fiction inspire your decision to write about an unraveling family?

Oh, absolutely, the family is one of the great subjects of literature. I read Jonathan Franzen’s The Corrections at a pretty impressionable teenage moment, and it just bowled me over with its depiction of intimacy within a family. Of course we all know that family relationships can be savage as well as tender, but I’d never before encountered a family quite like the Lamberts, millennial Americans who seemed to trade in both at once. Other families that have meant a lot to me include the Schlegels and the Wilcoxes of Howards End and the many found in Shakespeare, from the Montagues and the Capulets to the families of Lear and Prospero.

The novel switches between both decades and cities, ranging from Suburban Maryland to post-9/11 Manhattan to San Francisco in the '70s. What was the significance of splitting the characters between coasts?

The East and West Coasts of the United States are the twin capitals of upper-middle-class American life: Socially progressive, status-hungry, and rather adept at creating wealth. In other words, they’re where the power is. The Violet Hour is as much about the failures of the liberal dream as it is about the failures of this particular family. It helps, too, that I’ve spent most of my life living in East Coast cities and visiting friends in the West; I’ve had ample opportunity to observe the peculiarities of these places up close and to fall in love with the people who inhabit them.

Cassandra’s family owns a funeral home in Maryland that becomes a defining setting in the novel. Why did you choose for the mortuary to play such a role?

My mother grew up in a funeral home and I myself spent a big chunk of my childhood in a supposedly haunted house in Southern Virginia. Previous residents had left a whole set of illustrated Poe on a shelf. Talk about nightmares! I was one of those kids who feared death and burial so much it was often all I could think about. So given all that, it was probably inevitable that cadavers would find their way into my fiction — especially once I started writing about love and status. As a counterpoint to desire and ambition, it’s hard to beat a dead body.

The characters in The Violet Hour are understandingly absorbed with the events in their own lives and expend significant time self-justifying their actions and feelings. What was the purpose of the occasional references to current events outside of the sphere of the characters (i.e. Hurricane Katrina)?

So many storytellers from David Simon to Jesmyn Ward have given us powerful on-the-ground perspectives on Katrina. I wouldn’t pretend to be in their camp — I’ve never even been to New Orleans! My interest here is in the national failure — the one that involves all Americans, not just those on the Gulf Coast or holding the levers of power. All of the major players in The Violet Hour are for the most insulated from disaster by their privilege. That’s true every day of their lives, but it’s undeniable in the wake of an event like Katrina. As the beneficiaries of a broken system—the ones who get to read catastrophe for breakfast—they know they bear some responsibility. They feel it deeply, as I think many of us do. At the same time, they are individualists in a nation of individualists. However hard they may try, they can never stop being the most important people in their own lives.

Your many accolades include a plethora of award-winning short stories, an MFA from Bennington College, and a fellowship from the Virginia Center for the Creative Arts. How does having your first full novel published compare?

Of course every boost along the way is thrilling, but having a book (an actual book!) is just beyond surreal. I worked on The Violet Hour for seven years —you’d think I’d be prepared. But to me, a novel is still something written by Virginia Woolf. I’ve been grinning like a maniac for months, and I doubt I’ll stop anytime soon.