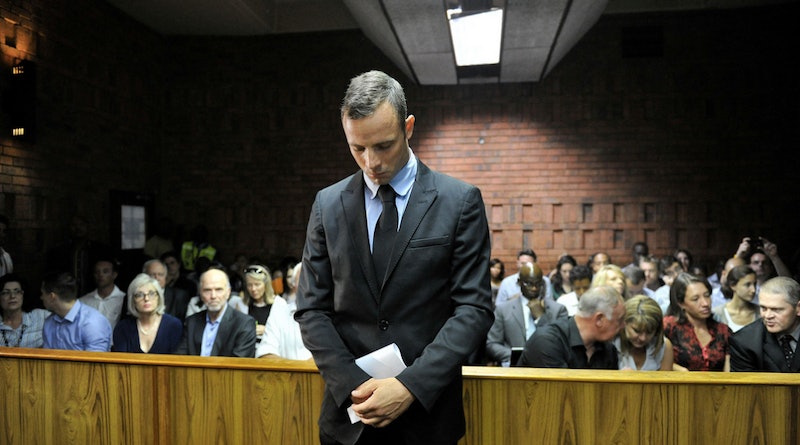 Last Valentine's Day, Oscar Pistorius shot and killed his girlfriend Reeva Steenkamp in the early morning hours of Feb. 14, 2013, and is now in the midst of one of the most highly publicized and closely watched murder trials in recent memory. With the dramatic 25-day trial — complete with tears, screaming prosecutors, and even vomiting — now on recess, there's one question on everyone's mind: What will the Pistorius verdict be?

Pistorius has never denied responsibility for killing Reeva Steenkamp. Instead, the point in contention is whether Pistorius knew that it was Steenkamp behind the locked bathroom door, or whether he truly acted in perceived self-defense, believing an intruder to be in his apartment. Given the facts of the case, it seems that Judge Thokozile Masipa can only come to a handful of conclusions in determining Pistorius' sentence.

Of the three possible convictions, this is the least serious, and is what the prosecution is attempting to prove. Culpable homicide would suggest negligence and not malice. If Judge Masipa decides that Pistorius thought that in the darkness of Feb. 14, 2013, there was a potential burglar who posed a serious threat to his life and that of his girlfriend's, it is likely that Pistorius will be found guilty only of culpable homicide. This would suggest that not only did Pistorius not intend to kill Steenkamp, he also didn't realize that she was the one behind the door.

There is some evidence consistent with this hypothesis: Pistorius' former girlfriend, Samantha Taylor, testified that Pistorius had woken her up on multiple occasions when he thought he heard a suspicious noise. He then proceeded to take his gun, which always reminded at his bedside table, to investigate. Also in question is whether or not the Blade Runner had his prosthetic legs on at the time of the shooting. Pistorius claims that when he shot, he was on his stumps, suggesting that he acted in haste.

Of course, there is also evidence that would make Pistorius' version of events difficult to believe. For example, that he did not realize that Steenkamp was in bed with him would be a shady proposition at best, considering that one photo of the crime scene shows the duvet on the floor and not on the bed. Moreover, the fact that he fired four shots without so much as asking "Who's there" seems somewhat suspicious. The sentence for this verdict would be at the discretion of Judge Masipa.

If Pistorius were to be convicted of murder, it would mean that he meant to kill whoever was behind the door as his fired his gun. A ballistics expert has testified that Steenkamp was not killed by the first two shots, and theoretically would have had time to scream before Pistorius fired the lethal shot. This would suggest that Pistorius was set on ending someone's life, and also seems to assume that Pistorius knew that Steenkamp was in the bathroom.

Murder, in this case, could be a crime of passion. Pistorius' saving grace, then, would be Judge Masipa's decision that Pistorius did not plan to kill Steenkamp, and events simply unfolded in the heat of the moment. This ruling would certainly be more damning for Pistorius, who has consistently insisted that Steenkamp's death was an accident -- a tragic accident -- but an accident all the same. Murder, however, makes things seem much less accidental, even if it wasn't meticulously planned. If the Blade Runner is found guilty of murder, he will face 15 years in prison.

The crime with which Pistorius is charged, premeditated murder, is by far the most damning accusation. In this scenario, Pistorius knew that Steenkamp was in the bathroom, considered killing her, and acted upon his consideration. While there is debate regarding how quickly one can form intent, with pundits Dan Abrams and Nancy Grace disagreeing on whether or not one can "premeditate" a murder in a matter of moments, the outcome of such a ruling would be the worst case scenario for Pistorius.

Gerrie Nel's thunderous accusations of Pistorius' lying, rocky relationship with Steenkamp, and penchant for guns and violence have certainly suggested that Pistorius is capable of planning to kill his model girlfriend. And if this is the case, then Pistorius will be sentenced to life in prison without the possibility of parole for at least 25 years.South Africa does not practice the death penalty, so at the very least, this punishment is off the table for Pistorius. But regardless, his outlook is far from rosy.