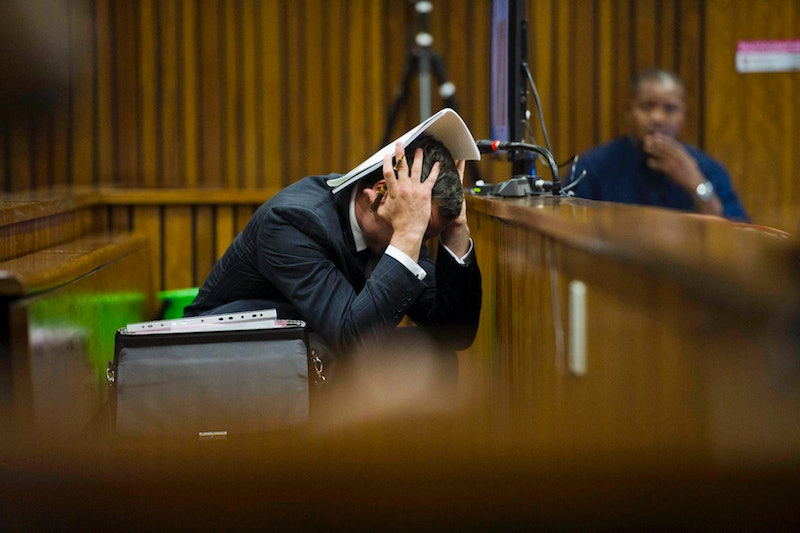 Oscar Pistorius, once a South African hero and an icon for handicapped citizens of the world, has taken a mighty tumble from fame to infamy. During his grueling time on the witness stand, the Blade Runner seemed wracked by seemingly incredibly strong emotions, leaving Pistorius hysterical, crying, and even vomiting in court. And while Pistorius has had no shortage of tears and demonstrations of remorse, speculation has come to light about how legitimate his many breakdowns actually are.

Pistorius' trial is currently on hold and will resume May 5, whereupon the former Paralympian's fate will be determined. For 25 days, Pistorius has appeared in court, and regardless of whether the athlete was on or off the witness stand, he maintained an distraught, heartbroken appearance. Now, prominent South African journalist, Jani Allan, has written an open letter to Pistorius that accuses him of taking acting lessons in order to prepare for the role of his life: that of an innocent man.

Allan, once named by Gallup as “the most admired person in South Africa” and a former journalist for the South African Sunday Times, said in her letter: "I have it from a reliable source that you are taking acting lessons for your days in court." In light of this most recent twist in the Pistorius case, several different parties are weighing in on the truth behind Pistorius' apparent grief. Alan M. Deshowitz, a lawyer and academic who represented such high profile-clients like O.J. Simpson and Claus von Bülow, offered a number of potential explanations for Pistorius' emotions in the New York Times Sunday.

More like this
Chloe Pirrie Is Ready To Take The Next Step
By Sam Ramsden
13 Photos Of Princess Charlotte Loving The Commonwealth Games
By Sam Rogers
Dr. Anna Pou Is Still Practicing Medicine After Facing Murder Charges
By Brad Witter
'Children of the Underground' Subject Faye Yager Now Runs A North Carolina B&B
By Brad Witter
Get Even More From Bustle — Sign Up For The Newsletter