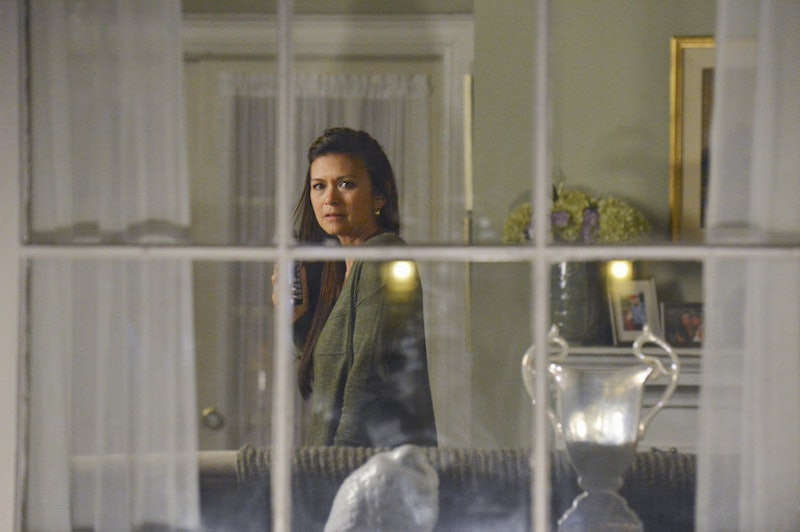 The Liars are playing babysitter for Hanna, who's heartbroken over her mother's arrest. On a related note, can you imagine what terrifying babysitters these girls would make? (Nothing like Kristy, Mary Anne and Claudia, y'all.)

But it's not so bad, is it? Ashley Marin is making that orange jumpsuit werk. Just when I'm beginning to feel legitimately sad for her, as she tears up hearing Hanna optimistically plan their future social calendar,"#PoorAshley" flashes on the screen. Way to hashtag my feelings, PLL.

Honestly, the odds aren't in Marin's favor. Mrs. Hastings hopes that, with luck, they can make a case for voluntary manslaughter—the best-case scenario being a twenty-year prison sentence. Will Ashley have to plead self-defense for a murder she didn't actually commit?

Caleb and Toby have teamed up to investigate Wilden's death, because two uninteresting characters together almost equal an interesting plotline. Using #Technology, the boys access a database of Pennsylvania flight records and find a match for the plane spotted at the lodge. They bribe a local airfield official for information, but he doesn't give up much. After Toby recognizes his initials from the Thornhill lighter, this very dude, Nigel Wright, admits that he was paid to file a fake flight plan by CeCe Drake (!). Did CeCe light the fire? Is she Wilden's killer? Could she be Red Coat?

Aria grows suspicious of her brother Mike's potential role in the vandalization of Connor's car—and so do the police. Connor's father even presses to have Mike expelled, but a lovelorn Mr. Fitz (who else?) talks the principal out of punishing him.

The Fields family is having trouble paying for Emily's physical therapy. Speaking as a certified medical professional (I think we had to learn CPR in high school?), she seems fine to me. Walk it off, lady. While visiting her mom at work, Em spots an intriguing piece of official police evidence: the key to Detective Wilden's apartment. She steals it, because obviously.

Inside the deceased's dirty, cluttered home, the Liars discover a box of (now rotten) mail-order steaks. A note from A is tucked inside, making reference to "[their] little barbecue." Back in real life, the key's disappearance gets Mrs. Fields suspended.

Yet that's far from the worst part of this woman's day. A car plows right into the Fields family living room—nearly mowing down Emily's mom.

Fashion crisis of the week: Mr. Fitz wears an old-man sweater vest over a shirt printed with ... tiny birds? I'm not making this sound as bizarre as it looks, so please take my word for it.

See you next time, bitches. Xoxo.

More like this
Everything To Know About The 'Pretty Little Liars' Reboot On HBO Max
By Mary Kate McGrath and Jack Irvin
“The Door Is Always Open” For Another 'Breaking Bad' Spin-Off, Says AMC Boss
By El Hunt
Emma Thompson, Lashana Lynch, & Stephen Graham Lead Netflix’s 'Matilda'
By Sophie McEvoy
Why You Loved 'One Tree Hill' So Much — And Still Do
By Sabienna Bowman and Radhika Menon
Get Even More From Bustle — Sign Up For The Newsletter