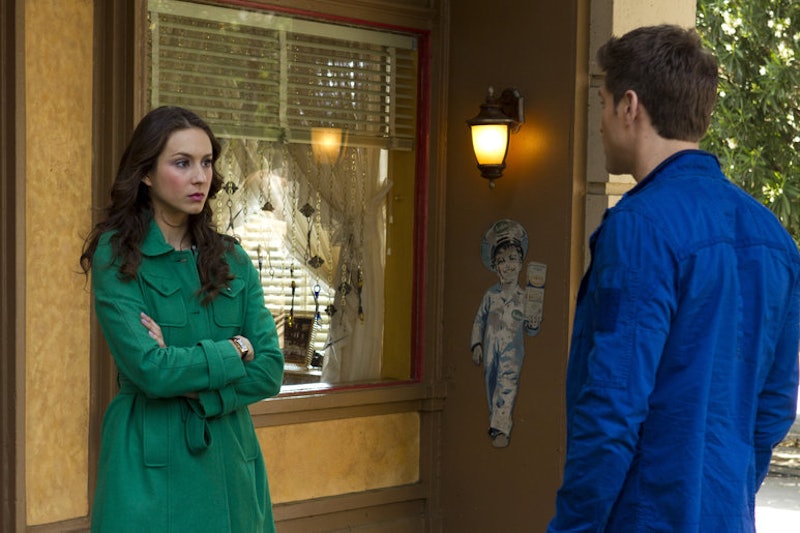 OK, that's enough formatting. I think I've made my point. Picked up by the cops last week for carrying a concealed weapon (TOLD YA, GIRL), Hanna is now under house arrest, moping around her bedroom in Uggs and Googling the legality of prosecuting minors. Honestly, I wish the show would actually send her to prison—in part because I'd love to see Hanna go Mean Girls on her fellow inmates, but mostly because Generation Z deserves its own juvie adaptation of Orange Is the New Black.

Ashley Marin is deeply (and understandably) freaked out, as evidenced by a hammy moment in which she dramatically stares into space as the contents of a frying pan loudly burn behind her. She admits she stole her ex-husband's gun for her own protection, but insists that she never used it. When the Liars discuss the investigation, Spencer must explain basic ballistics to Aria ... who, for a fan of detective movies, knows surprisingly little about entry-level CSI tech. #ExpositionFail

Aria helps Connor, a friend of Mike's, edit an English essay. He kisses her. Whoa. Slow your roll, son. You're about ten years too young for Aria. Though she unambiguously shuts him down, he has the locker room abuzz with a falsified account of their "hookup" the next day. Mr. Fitz overhears her confront Connor and friends. Feelings. For once, Mike proves to have at least a few neurons of personality, apologizing to and comforting his sister. More feelings.Spencer does some digging into the ramshackle panic room she found in the sorority at Cicero College. She learns that the former house mother, Carla Grunwald, would mysteriously disappear for hours without leaving the building. To find her, Toby and Spencer drive to ... Ravenswood?! Dun dun dun.True to the city's name, there is a phobia-inducing bird population; one raven even falls to its death right in front of Spencer. Everything is grayscale

and everyone is aloof. Ravenswood: a bad place to visit, a worse place to live. When grim Grunwald claims no knowledge of Ali, Spencer is confused, but she doesn't buy it. But the house mother's deception makes more sense when Spencer spots Shauna—who just transferred to Rosewood, by the way—driving Jenna's car around so-called "Creepyville."At the police station, Lieutenant Tanner plays Emily a video of a woman who appears to be Em, wearing a red cloak and holding a sign that reads "Guilty." The clip is on a disc that was anonymously left on Tanner's desk that morning, along with a note about Detective Wilden's murder—a note written in what looks like Emily's handwriting.A hooded figure smashes Connor's headlights and spray-paints "LIAR!" on the side of his car. As our unknown vigilante hotwires another vehicle, we see that she (or he) is wearing an uncanny Emily mask.In the episode's final moments, Ashley Marin is arrested. Tanner has discovered that her gun is a match for Wilden's murder weapon—and that Marin's fingerprints are all over the bullets that killed him.

Best burn of the episode: "Mona may not be A, but she's definitely still a B."

Worst burn of the episode: Connor accuses Aria of having been more than "Scrabble buddies" with Mr. Fitz: "How many points is the word 'slut' worth?" Four points, dog. It's worth four points.