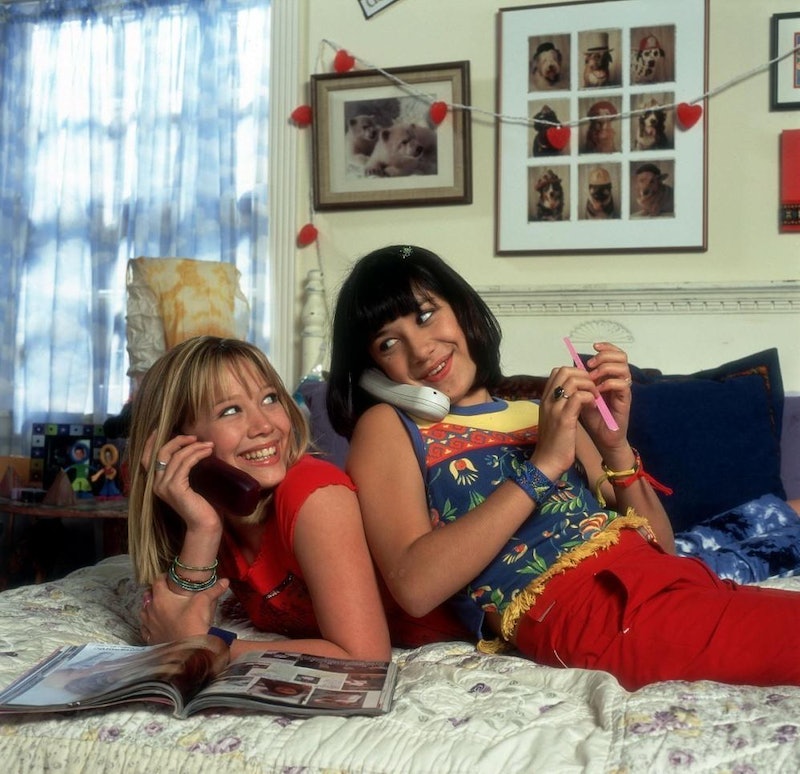 We all know that great works of art can shape us. Sometimes, it's a critically-acclaimed journey through one man's psyche, like Mad Men. Or, it's an empowering '90s supernatural teen series, like Buffy the Vampire Slayer. And sometimes ... it's a Disney Channel show called Lizzie McGuire .

Lizzie McGuire aired on the Disney Channel from 2001 to 2004; right smack in the primetime for development of millions of millennial girls. We were looking for a style icon and a moral compass, and boy, did we find a great (albeit hallucinatory) one. We followed Lizzie, Gordo, and Miranda through their coming of age and — isn't it always the case? — went through one right along with them.

The first kisses, the disses, the really truly terrible hair decisions, the fights, and the general middle school madness: It was basically The O.C. with more heart, and less drugs. Here's how you know you were (and perhaps will always be) a true Lizzie McGuire superfan.

either way, you definitely tried out those hair styles

and it was epic

Seriously, what is even going on here?

either way, you suddenly found yourself needing an abundance of scarves

And some...other stuff from claire's

But that's definitely some kind of psychiatric issue, right?

when Lizzie got her heart broken, you did too

If it happened to her, you just knew it'd happen to you eventually.

And you wanted Gordo and Lizzie together real bad

Gordo could definitely be stereotyped as a Nice Guy, but his friendship with Lizzie was genuine and unencumbered by bitterness.

... even though she completely ignored him romantically

not to mention, you were better for him, anyway

(though perhaps you didn't want to admit it)

but really, as long as those three stayed together, you were happy

(I still need those plaid pants, by the way.)

It was like the entire show was just a LIE

Did you not mean what you said, Disney Channel???

Though you trust she had her reasons

Because Miranda was the coolest.

no matter what he achieves, you know Zachary Quinto was on this show first

you've looked up what the cast looks like now

and when Hillary Duff got married and had a baby, you knew you were officially old

(And that was before you knew about the marital problems.)

More like this
Hilary Duff Is “Optimistic” About A 'Lizzie McGuire' Reboot
By Alyssa Lapid
This 'Gossip Girl' Wardrobe Error Has Gone Viral On TikTok
By Alyssa Lapid
All The ’70s Easter Eggs You Missed In 'That ’90s Show'
By Grace Wehniainen
At 28, Debra Jo Rupp Was Living A Much Different '70s Show
By Grace Wehniainen
Get Even More From Bustle — Sign Up For The Newsletter
From hair trends to relationship advice, our daily newsletter has everything you need to sound like a person who’s on TikTok, even if you aren’t.