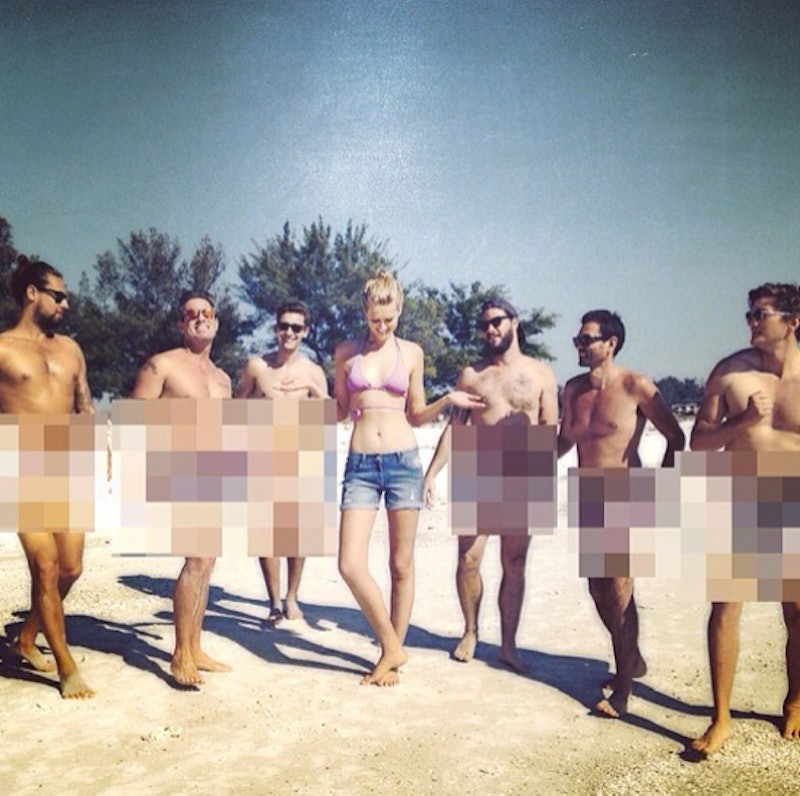 Leonardo DiCaprio's girlfriend, Toni Garrn, posted a photo of herself with six naked men on Instagram on Saturday. The 21-year-old Victoria's Secret model joked in the caption, "Mr @wattsupphoto has a strict #dresscode for his team." Rather than suggest that the Wolf of Wall Street star no longer possesses a viable male member, this photo sends the following message: Leo is worth six of you. No wonder he got away with his Bora Bora hairstyle.

Where, you may be wondering, did Garrn find this naked hex-some? A little digging on Instagram reveals that this photo was taken by none other than Ben Watts, a photographer who covers women's and men's fashion. The New York-based photographer posted photos on his own Instagram account that provide more context and indicate that the men were part of a Victoria's Secret photo shoot in Sarasota, Florida. Odds are that Garrn could have collected them on her own and convinced them to strip, but it makes more sense that, as male models, they're already conditioned to viewing their bodies as canvases. When they're already half-naked for most of the day, it doesn't take much activation energy to transition to fully-naked. Orange mocha frappuccino, anyone?

Here's a photo from Ben Watts' Instagram account showing Garrn with some of the same men, now clothed.

So, while fans of DiCaprio and Garrn can relax with the knowledge that these "other" men are paid to be semi-naked, they should still enjoy the comments on Garrn's photo. While some writers are decidedly more judgmental, like the person who commented, "you could have leo rn but youre taking selfies with naked men," it's clear that they don't see these mellow fellows as a serious threat. They are more jealous, instead, of the absent "member" of this photo: DiCaprio himself. leogasm writes, "Feel free to post a pic of Leo like that 😂👌," which pretty much sums up the internet. Maybe DiCaprio doesn't want to get naked until he owns a golden statue in a similar state of undress.