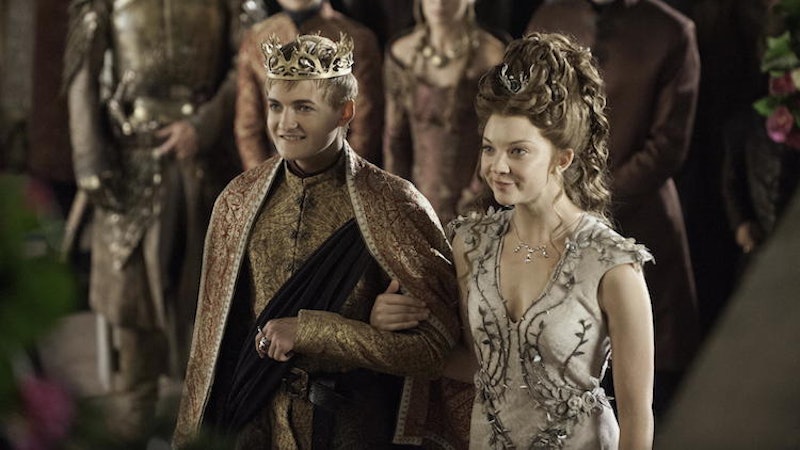 For weeks now, we've wondered about the audacious soul who killed King Joffrey on Game of Thrones , and finally, we have an answer. In the first 20 minutes of Sunday's episode, "Oathkeeper," we learned once and for all that Tyrion didn't kill his dear (see: sarcasm) nephew. Just as most of us supposed, the culprit was a Tyrell.

Of course, it wasn't bad bitch in training, Margaery, but her ruthless (and badass) grandmother Oleanna. In yet another scheming scene between her and her granddaughter, Oleanna begins formulating Margaery's moves for wooing the youngest Lannister, Joffrey's young brother Tommen. However, conversation eventually turns towards Cersei, and from there, we get to Tyrion. That's when Oleanna says she knows Tyrion didn't do it. Obviously, it's a bit suspicious that this old woman who was not near Joffrey when he died somehow knows resolutely that Tyrion didn't do it.

It all becomes crystal clear when Oleanna blithly quips that she "couldn't let [Margaery] marry" Joffrey. Yep. There you have it: the badass granny did it... at Joffrey's wedding with the poison. Of course, we're still not sure how she managed to pull this off so seamlessly. In the books, the theory goes that Oleanna plucked a poison gem from Sansa's hairnet (turned into a necklace forged by Littlefinger on the TV version) and this clip shows the point at which Oleanna may have plucked the gem from Sansa's necklace. Of course, the matter of when the drop happened without anyone noticing is the grand mystery.

No matter. Because for now, we can rest assured that Tyrion is the swell guy we always thought he was and that Granny Tyrell is the most cutthroat, #bossbitch grandma that ever lived. And that's good enough for us.