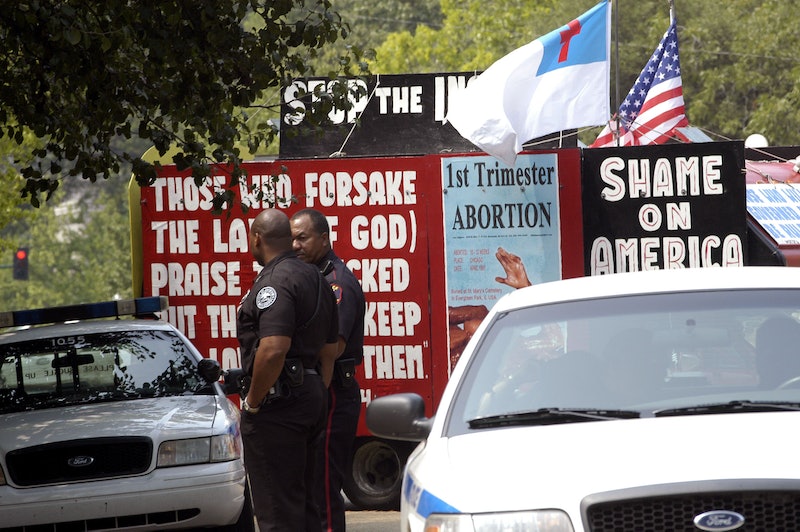 One week after Mississippi Gov. Phil Bryant signed a harsh 20-week abortion ban with no exceptions for incest or rape, Mississippi's lone abortion clinic is back in court Monday fighting to remain open. It's the latest legal battle for the clinic, which has weathered numerous attacks by anti-abortion activists and lawmakers ever since it became Mississippi's sole pro-choice beacon. But as clinics across the southeastern United States continue to shutter thanks to similar restrictions, the fate of abortion access for thousands of Mississippi women hangs in the balance.

You wouldn't suspect Jackson Women's Health Organization — housed in a bright pink building in the state capital's Fondren neighborhood, and surrounded by vibrant cafes and shops — was an abortion clinic, except for the crowd of protesters patrolling the sidewalk with signs and crosses. Some even bring their own plastic lawn chairs as they keep vigil in front of the embattled clinic. Only a few blocks away is the "Memorial to the Missing," a monument made up of pennies that honors the unborn.

The tension has made it easier for lawmakers to pass anti-abortion measures — and they're winning. The law in question Monday requires doctors at the clinic to be board-certified and have admitting privileges at a Jackson-area hospital.

Because the hospitals need to be local, it's been nearly impossible for the clinic's two doctors, who fly in each week from other states, to receive admitting privileges.

Considering that abortion restrictions have been in place in Mississippi for almost as long as Roe v. Wade, it's always been pretty difficult to obtain a legal abortion in the state. Before undergoing the procedure, women are required to have an ultrasound and receive in-person counseling that has an anti-abortion slant. There is also a 24-hour waiting period that starts after the counseling, so women have to make two trips to the clinic.

Meanwhile, minors can't obtain an abortion without consent from both parents, unless it's a medial emergency. Plus, abortion would be immediately banned if Roe v. Wade were overturned.

There's also the price to consider: Jackson Women's Health charges $450 for a first-trimester abortion, while a second-trimester procedure costs between $600 and $750. The state doesn't allow Medicaid to be used for the procedure except for rape, incest or medical emergencies, making low-income women pay out of pocket.

According to the Guttmacher Institute, 2,220 Mississippi women had abortions in 2011, representing just four percent of pregnancies. More than 90 percent of women live in a county without a provider. Currently, Jackson Women's Health only provides abortions up to the 16th week, which means women who need the procedure further along in the second-trimester have to travel across state lines to Louisiana, Alabama or Tennessee.

If Mississippi were to become an 100 percent "abortion-free" state, travel would be a necessity for women who need abortions. But traveling to get one is becoming more arduous; clinics in nearby states are being forced to close. The New Woman All Women clinic in Birmingham, Alabama, lost its license in 2012 and, after a two-year legal battle, was forced to close in August 2013. Meanwhile, Planned Parenthood Birmingham Center — the only abortion clinic left in the state's largest city — temporarily slowed down its services earlier this year. Neighboring Louisiana has five clinics left, but, much like Mississippi, a new law there is currently placing them in danger.

Traveling across state lines for an abortion is also costly. Birmingham, for instance, is about a four-hour drive from Jackson. A trip to Bossier City, Louisiana, is about the same, while New Orleans is only about three hours away. But Alabama and Louisiana also have 24-hour waiting periods — Alabama lawmakers are trying to extend that waiting period to 48 hours — necessitating two trips to the clinic. For many Mississippi women, that could mean a hotel stay for at least one night.

Basically, Mississippi women will be taken back to the pre-Roe era, and their safety will be endangered.

“The devastating impact of this unconstitutional law couldn’t be clearer,” Julie Rikelman, the litigation director for the Center for Reproductive Rights, said in a statement. “Women across the state will be plunged back into the dark days of back-alley procedures that Roe was supposed to end.”