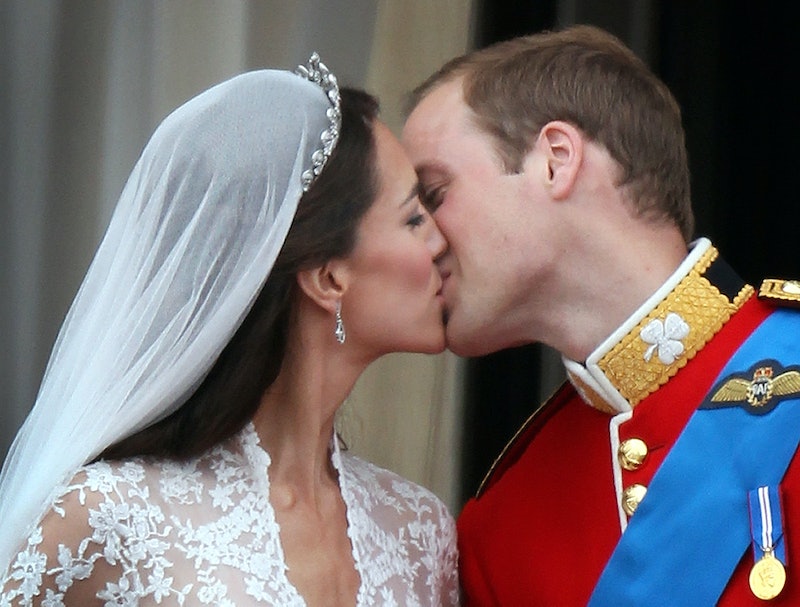 Three years ago on April 29, Prince William and Kate Middleton were royally wed in the most fairy tale wedding that's ever happened. Two billion people across the globe watched the ceremony, with many waking up at incredible hours of the night to tune in from different time zones. During the royal tour to Canada after their marriage, one girl told Middleton that she woke up at 4:00 a.m. to watch the wedding, and Duchess Kate laughed and said, "I'm so sorry!" Though their wedding was undoubtedly a special moment in their own lives, the royal couple seems to prefer to keep their anniversaries low key, rather than throwing a huge bash. But around the world, Kate Middleton fangirls (yes, that includes me) are celebrating her and Prince William's special day.

Those who watched the full ceremony know there were so many amazing moments, from the aww-worthy to the utterly hilarious. So for those of you who may have forgotten the more notable parts of the world's most important wedding (sorry Kimye) here's a recap of the 9 greatest moments.

1. THIS FLOWER GIRL WHO WAS SO DONE

She cared 0 percent that the world's most magical kiss was happening behind her. She was tired and this stupid couple didn't matter and the crowd was too noisy.

Seriously though. Look at her. She's my favorite human ever.

2. THE FACT THAT EVERYTHING WAS CINDERELLA

From Prince William's outfit to princesses Beatrice and Eugenie being evil stepsister stand-ins, this wedding was a literal fairy tale... when it was Photoshopped. So yeah, it wasn't exactly like Cinderella, but hey, close enough.

Look at them sharing some kind of inside joke. It's too much.

6. POSH SPICE WAS THERE

And David Beckham too. But POSH.

7. THE INTERNET FREAKING OUT OVER PRINCE HARRY

With Prince William taken the internet turned their attention to his younger brother who seems more fun and has more hair.

Pretty Pippa in her white gown stole some attention away from Kate as the world was introduced to the younger Middleton sister and suddenly became enamored with her too.

In a rare display of public affection, Prince William kissed his new wife not once (as is standard) but twice because he loves her and they're adorable together. Happy three years Will and Kate!