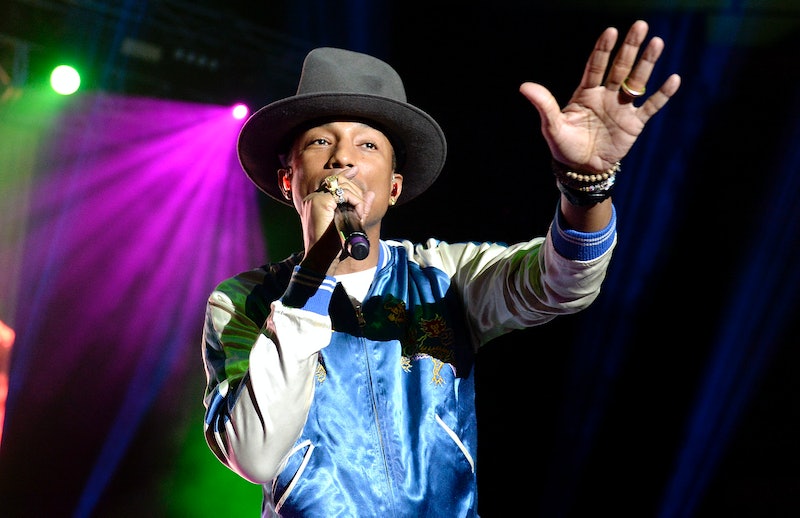 No, mom, this is not a phase. Remember the raging outcry that came with the debut of Pharrell's Vivienne Westwood Buffalo Hat at the Grammys and the collective sigh of relief when we found out that he was auctioning it on eBay to a new, happy home? (With Arby's.) We quickly learned that the new The Voice judge had a collection of said, abnormally large hats — as they appeared to dwarf his head at every award show and performance after that fateful night at the Grammys. It's probably a safe bet to assume that the "Happy" singer will be joined again by the ever-present lumpy hat for Pharrell's Saturday Night Live debut. Because wherever he goes, the Buffalo apparently follows.

Pharrell isn't the only performer whose headwear has become a part of his persona — nor is the Buffalo the only famous, signature hat to hit Hollywood. So when we look at famous and iconic hats in the history of music and film and put them head to head (ha) with the "Happy" singer's new favorite accessory, which one wins? You're about to find out.

The Buffalo vs. The Sorting Hat (Harry Potter)

Let's speak frankly for a second. The Buffalo — in both color and strategically-placed wrinkles — looks strikingly like the Sorting Hat from Harry Potter. Am I right? I'm right — I know you see it. But, unlike the Sorting Hat — the Buffalo does not possess any magical properties and can't grant people ancient, ruby encrusted swords. Unless it's the secret to Pharrell's impossibly youthful appearance, in which case, he'd be the winner by default. But he's not. So the obvious winner here — based on originality and power — is the Sorting Hat.

The Buffalo vs. Indiana Jones' Fedora

Again, these two have color and indentations in common — well, the Buffalo has a few more dents than Indy's famous headgear. Indiana Jones' fedora is a classic and even though we know that Pharrell's look is inspired by a classic as well (the "Buffalo Girls" music video), we think Indy wins this one.

It's iconic, yes, but would you ever wear it now that the trucker hat craze of 2003 is over? No. While Wayne's trucker hat and Wayne's World are classics, you'd be less likely to wear one in 2014 than you would the Buffalo. So, sorry SNL and Mike Myers, but the Buffalo wins this round.

The Buffalo vs. Slash's Top Hat

Here's where Slash's top hat has the Buffalo beat: in height and in quirky flair. Not everyone can rock a top hat, whether it be ironically or un-ironically, and there's definitely only a handful of people that can rock out with a top hat like Slash can. The same goes for the Buffalo — Pharrell might be the only person to make that wacky-looking situation seem mildly cool but on the other hand, there's less of a challenge in keeping it on your head. So who wins? Slash's top hat has been a part of his look for a lot longer than the Buffalo has been part of Pharrell's. Slash wins.

Unfortunately, the Buffalo doesn't win — we're not sure if we're biased because of how sick we are of "Happy" or not — but it might take a few years for Pharrell's new style to compete with some of the classics on this list. But if it makes you happy, Pharrell, be it far from us to tell you which headgear should be your go-to.