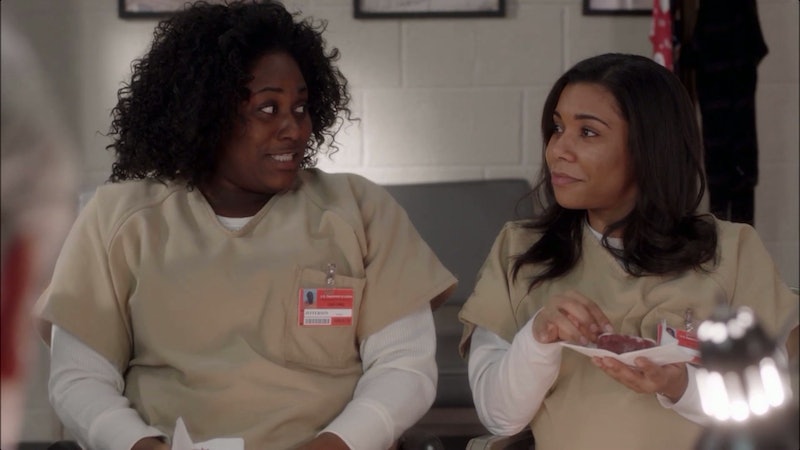 Those of you who somehow haven't yet binged on Orange is the New Black might not have given that question much thought. But this week, incarcerated birth is in the news.

Advocacy groups have been trying to raise awareness of pregnant prisoner abuse for years. Here's what you need to know about what conditions are like for incarcerated pregnant women:

1. Your choice is often made for you.

Over the years, the ACLU says it's received thousands of letters from incarcerated women whose requests for abortions were "denied, delayed, or ignored" by staff at their state-run prison. According to a 2009 report by Guttmacher Institute, many women receive no assistance in facilitating access to abortion procedures — and up to 30 percent are not given a choice at all.

2. Strip searches, but no pre-natal care.

In a 2010 report called Mothers Behind Bars, researchers from the Rebecca Project for Human Rights and the National Women's Law Center conducted a state-by-state analysis of federal policies and the conditions of confinement. They looked at factors from proper nutrition to screening for high-risk pregnancies. Their findings were grim:

As with other facets of prison life, the prison health care system was originally established to serve a predominately male prison population. For this reason, while most health care in a prison setting could be described as barely adequate at best for men falls even shorter from meeting the basic needs of women. Care for pregnant women is even more dismal, considering their additional health needs.

Since most prisons do not have obstetric or gynecological equipment on-site, most pregnant women have to leave the facilities to visit a doctor. Only 19 states require prisons to facilitate that access for their inmates. Not that leaving the correctional facilities itself is any great victory: The Women in Prison Project has collected many stories about that ordeal, which often involves a mandated strip search before and after each appointment.

3. Most incarcerated women give birth in shackles.

Thirty-six states have either outlawed or restricted the barbaric practice —meaning it's still legal in 33 states.

As Jezebel reports, "even in Illinois, which has anti-shackling laws, a class-action lawsuit filed by 80 female inmates claimed they were shackled while giving birth as well as recovering. (They won a $4.1 settlement.)"

On top of that, many shackling restrictions allow for "soft restraints," which allow the use of handcuffs and ankle cuffs rather than leg irons or waist chains.

Why do guards need to restrain woman as they, you know, push out a baby?

That hasn't swayed The American Medical Association, whose members deemed the practice unsafe, "medically hazardous," and "barbaric" in 2010.

4. Your partner won't be there.

This one is obvious, but important. So important in fact that a group of doulas has banded together to form the Birth Attendants Project in order to give birthing women some company beyond the requisite corrections officers. If you want to cry, read this personal story.

5. You'll get to spend no more than 24 hours with your baby.

Most prisons had nurseries back in the 1950s, but with skyrocketing rates of incarceration — and the corresponding skyrocketing bills required to keep them open — the vast majority of incarcerated mothers are now forced to either give up their baby to foster care or place them with family on the outside.

And, to top it all off, thanks to sub-standard pre-natal care, these kids often come out needing more care and attention than average, according to the National Women's Law Center report:

...Failure to comport with nationally recognized standards for prenatal care results in poor health outcomes for children born to women who are imprisoned. In addition to the immediate and long term harms to women provided inadequate care during their pregnancies, there is also harm to their children. The children may live with lifelong health problems that result from their mothers’ failure to receive proper nutrition during pregnancy, or to receive treatment for health conditions that contribute to poor pregnancy outcomes.

More like this
10 Organizations To Support On Latinx Women's Equal Pay Day
By Caroline Burke and Mia Mercado
MOBO Awards Found Kanya King On The Woman Whose Grit & Determination Spur Her On
By Kanya King
Dyson Is Dropping Futuristic, Air-Purifying Headphones
By Rachel Lapidos
Meet The Rugby World Cup Breakout Star Making The Sport More Inclusive
By Shahed Ezaydi
Get Even More From Bustle — Sign Up For The Newsletter