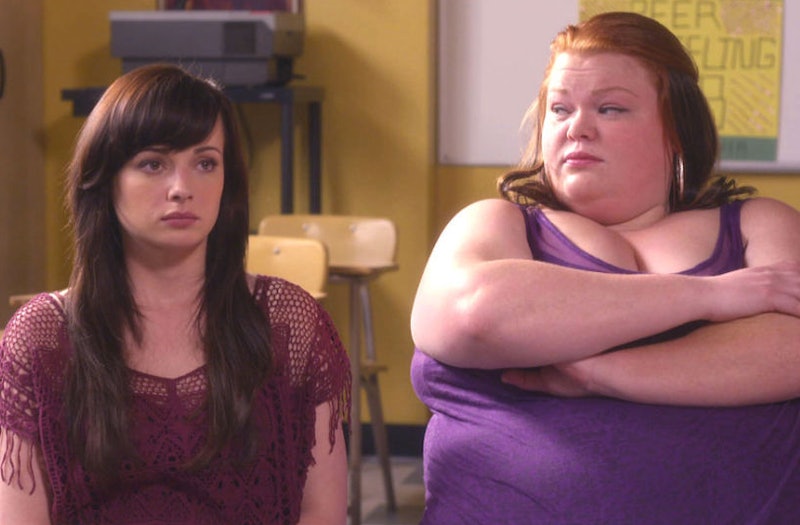 It's an age-old question: What does a high school show do as it nears the end of its main characters' high school experience? Some shows have pulled off big changes without a hitch — others not so much. But, interestingly, MTV's Awkward , senior year has focused on what's come before it. It's not dwelling in the past, per se — Jenna's has previously done plenty of that, and this feels a little different. Because though Awkward treaded old water during its new episode Tuesday night, it's doing more reflecting than anything else. How? By using old storylines to show how much the characters have changed since the last time they put themselves through these things.

Of course, these stories also show us how the characters haven't changed: Jenna's still prone to bottled-up paranoia that eventually leads to bursts of overreaction. As Matty tells her at the beginning of this episode, "I need to be able to not talk to you for one day and not have you assume I'm not into you."

It's a common problem, and one that's followed these two in particular since their sophomore year, when they first started having casual sex that Jenna stridently wanted un-casualized, while rarely (if ever) vocalizing that desire. And now they're back having casual sex, this time as friends with benefits who used to be in a serious relationship. Matty's also still reeling from finding out his parents have lied to him his whole life by not telling him he's adopted. So, as one can guess, things are a little more complicated now. But can they handle it?

Jenna insists they can. The thing is, do we believe her? Because if memory serves correctly, Jenna's been insisting she's fine with the status quo since literally episode one, and the vast majority of the time those assurances are nothing but thinly veiled lies she's telling herself.

This time, of course, there are higher stakes: Not only is time running out (senior year means last chances), but now Jenna's responsible for molding the minds of the next generation — a position they really should have screened better for. But hey, if the pressure helps...

Surprisingly, though, Jenna deals with her renewed casual sex with Matty in a way that's less compromised by her previous urges for validation. Jenna's worried about Matty, and she should be. She's focused on being the friend in "Friends With Benefits," knowing that Matty's going through a hard time and could use emotional support. Matty, however, is focused almost entirely on the benefits side and pulling away from the rest, trying to avoid confrontation with this big thing he hasn't dealt with yet. In the process, Jenna realizes that in order to respect Matty and his feelings, she had to be true to what would make her feel respected. That self-respect and that respect for others? That was nowhere to be found in Season 1.

So, in a big plot twist, Jenna's maturity is actually front and center here, proving that, yes, as much as life can seem to cycle through the same old stories, things really do change.

Matty, on the other hand, seems to be in a place lower than we've ever seen him.