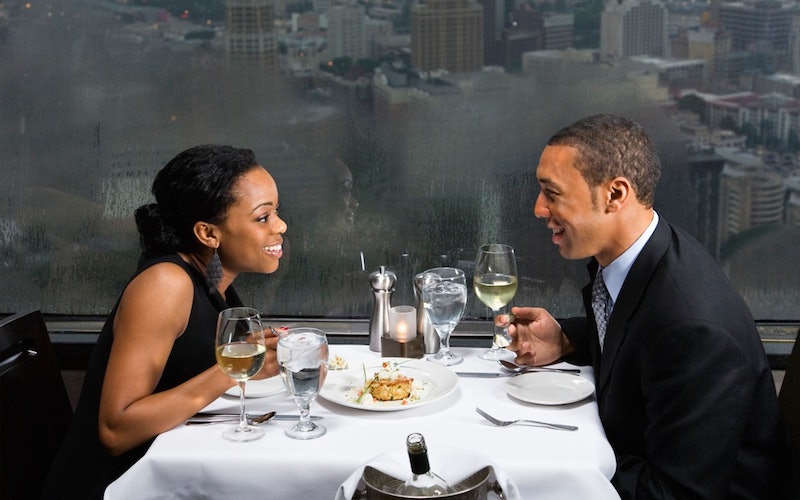 I am a feminist. I strongly believe in the social, political, legal, and economic equality of men and women.

Yet, on a first date, I expect the guy to pay for me.

Of course, at the end of dinner or drinks, I'll make a very convincing slow-motion gesture towards my wallet, which gets progressively slower until he tells me that he's got the bill. I've watched myself do this and wondered — Is this lame charade at odds with feminism? Does this desire undo my other feminist behavior? Do other feminists feel this way?

In order to unpack this mentality, I've tried to examine the why behind my expectation (and burning desire) for the guy to pay for my beer or taco — is it because he's a man, and I expect him, with his man strength and man finances, to provide for me? I don’t consider myself the type of woman who needs a man to take care of her, at least no more than I’d expect a man to need a woman to take care of him. I believe the supporting and the providing in a relationship (or casual hook-up) should be equitably distributed. I also believe that I make almost no money, which means I very much appreciate — particularly in instances where the man has initiated the date — a gesture that allows me to keep the extra (/only) cash in my pocket. Conversely, if I were to ask a guy out to a nice dinner or for drinks, I would offer to pay for us both, because I invited him and initiated the event that necessitated the spending of money.

“Feminism is about equality, which means it goes the other way too,” my friend said, when I told her about my intellectual and moral dating dilemma. “If you were to ask a guy out to a place, you should offer to pay. If you decide together to go to a place, then you should split it.” Perhaps the real feminist problem here is that I pretty much never ask guys out, because I largely abide by the societal norm that men do the asking out and women do the accepting. Thanks for that, society.

Another friend cited the issue of the pay gap and how that might validate this expectation for the man to pay, as a sort of balancing effect. “The fact remains that women do only earn 77 cents to a man's dollar, so economically it's really more fair if the guy pays, amirite?” she reasoned. “Plus, if you think about all the stupid shit we spend money on to make ourselves more attractive to men (hair removal, highlights, clothing, etc.) letting the guy pick up the first few dates is no big deal.”

It's true that societal expectations compel many women (myself included) to maintain a certain standard of beauty, which requires a huge amount of financial and emotional effort, particularly in the maintaining a façade of bodily hairlessness (the worst). And, more significantly, women typically purchase birth control, which is costly and inconvenient daily necessity. Yet, I’m not comfortable with the idea that men should cover the bill to subsidize our beauty and fertility needs, nor am I comfortable with the reality that society demands us, not our male counterparts, to maintain absurd beauty standards and ward off pregnancy. There’s something more fundamental at play here, and I can’t quite put my finger on it. Is it really just about the money?

Even when I do crudely justify my desire for men to pay (they’ll alllll pay!!), whether by pointing to the pay gap or the cost of bikini waxes or, more broadly, a universe of male privilege, I don’t think it’s fair for me to apply this on an individual basis. Because, for example, if I go out with a guy who earns far less than me (this is almost impossible, but bear with me), or a guy who lacks most of the markers of “male privilege” that I ascribe to all people with penises, I shouldn't demand more out of him simply because his kind, statistically, tends to earn or have more.

I know women who consider themselves feminists yet still desire a certain level of courtship. The man paying, in these instances, might indicate a certain level of commitment or investment, and perhaps that is reasonable. If sociologists cared about this topic and were to conduct study, perhaps they’d find that men who pay on the first date are more likely to follow up and pursue women seriously. I'd believe it.

However, I'm not too preoccupied with commitment or investment. For an embittered and independent struggling artist like myself, I want men to pay because I delight in free things, no matter who they are coming from.

I have a friend who, like me, is currently contending with this issue. She put it quite eloquently. “I think the reality is that I am totally a feminist — I just really, really like free stuff. And if culturally accepted double standards facilitate me receiving said free stuff, I’m probably just gonna roll with it.”

I like when a guy pays for dinner...and I also like it when a friend treats me to drinks or a boss buys my latte. I like to think that if I were the one making more cash, I'd happily reciprocate — in dating, in friendship, and in the workplace. Perhaps rather than gender, what matters here is who is more comfortable financially. “And unfortunately, in the world in which we happen to find ourselves,” another friend said to me, “the man is usually making more money.”

More like this
Are Sagittarius & Sagittarius A Good Match? Astrologers Weigh In
By Kristine Fellizar
Are Sagittarius & Aquarius Compatible In A Relationship? Astrologers Weigh In
By Kristine Fellizar
How To Have A Hometown Hookup Without Catching Feelings
By Lexi Inks
15 Ways To Deal With A Toxic Family During The Holidays
By Gabrielle Moss and Carolyn Steber
Get Even More From Bustle — Sign Up For The Newsletter